Even though he was born in Wyoming, grew up in Farmington and had lived in Albuquerque, Frank Chacon has called Bosque Farms his hometown for the last 42 years.

The affection he has for his adopted hometown is immeasurable, saying he wouldn’t want to live anywhere else. He and his late wife, Frances (AKA Pancha), raised their three boys in Bosque Farms, and he has made it his mission to make sure the village is as safe as possible for his family and neighbors. 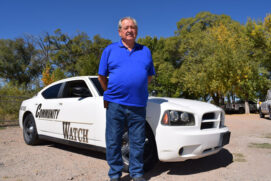 Frank Chacon has volunteered his time with the Bosque Farms Community Watch since 2003. Since then, he has recruited and trained several fellow volunteers.
Clara Garcia | News-Bulletin photos

For nearly 18 years, Chacon, a Vietnam veteran, has volunteered his time as a faithful member of the Bosque Farms Community Watch.

“I love Bosque Farms,” Chacon said. “This is my town.”

“(Bosque Farms) is very rural and very safe,” Chacon said. “We don’t lock our doors. Living in Bosque Farms is a great place to raise a family.”

For about a quarter century, the volunteers who man the Bosque Farms Community Watch program have helped patrol the neighborhoods Monday through Friday. Occasionally, volunteers can extend their shifts when they want. With one car provided by the village, the volunteers take a shift every other week.

Bosque Farms Police Chief Andrew Owen, who nominated Chacon as an Unsung Hero, says the volunteers act as an extra set of eyes and ears for the police department. 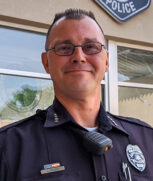 “I’ve gotten to know him really well in the past couple of years, but I’ve been here for 15 years, and he’s been a part of the community watch longer than I’ve been here,” Owen said of Chacon.

“We have a lot of volunteers who help out the community in so many ways, but for him to give up his time, and teaching other people who want to volunteer and passing down his passion for our village is amazing.”

Owen is grateful to the volunteers of the Bosque Farms Community Watch, saying there are only a few officers per shift, but having that extra set of eyes on the neighborhoods is helpful to the department.

“They’re not law enforcement, but having that extra set of eyes out there is great,” Owen said. “It gives our residents a greater peace of mind knowing their neighbors are out there driving around, too.”

The police chief says Chacon brings his heart to the program, and is always giving of his time and knowledge.

After retiring as a customer service representative supervisor for PNM in 2003, Chacon says the decision to volunteer for the BFCW wasn’t his alone. His neighbor, Mike Sophia, convinced him to join the program.

Before he was approached by Sophia, Chacon never knew of the program. He had always been at work when volunteers would patrol the village, and never saw them.

“I came into the community watch program and never stopped,” Chacon said. “He told me if I didn’t like it I could quit. Well, it looks like I never did.”

Chacon says while he first joined the program for Sophia, he eventually realized he was doing it for himself, but mostly for Bosque Farms.

Chacon said any time a volunteer goes out on patrol, they’ll check all the homes on the list, and will patrol the neighborhoods at their own discretion within the village.

There are currently more than a dozen volunteers, and Chacon has recently trained at least two new people to be members of BFCW.

The local volunteers also provide ride-a-longs for members of the community who can’t drive but want to help the program.

For Chacon, he volunteers for about 2 1/2 hours every other Wednesday, driving his route and keeping an eye on the houses in the village.

When he first started volunteering, he took the “job” more seriously than most, having driven 42 miles in a village that’s only 2 miles long during one shift.

“I came out with the attitude of trying to find out how many miles a person can drive in one day,” Chacon said. “I started at the north end — in out, in out — I got tired. After 42 miles, I hadn’t done it all. I was tired. I went down almost every street, even the dead ends.” 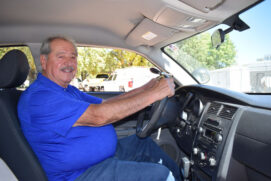 Frank Chacon, a member of the Bosque Farms Community Watch program, has been driving around the village for nearly 18 years, making sure resident’s properties are secured and nothing seems out of the ordinary.

After years of “practice,” Chacon says he’ll drive about five miles each time he’s out, saying it fluctuates every time depending on how many residents want them to check on their properties.

There are specific guidelines that the volunteers must follow because they are not trained law enforcement officers. They are armed only with a cellphone and a keen sense of sight looking for anything suspicious.

For the most part, Bosque Farms is pretty quite. Chacon said after volunteering for the community watch program for as many years that he has, he has never came across a situation he felt was dangerous.

“You hardly see anything,” he said. “There was this one time when there was suspicious activity at a house on the route. The garage door was wide open, there was a truck in front of it and boxes in the back.”

Chacon said his paperwork indicated the homeowners were supposed to be out of town and no one was going to be at the home. He decided to call the police, but unbeknownst to him, the residents had come home early.

“If you’re going to call dispatch, you want to make sure something is really wrong,” Chacon said.

Volunteering has been an opportunity to get to know his community and the people who live in Bosque Farms. Chacon says being able to help his community is why he does what he does.

Chacon says having volunteered for so long and driving around each and every street throughout his volunteer career, he can probably tell you what lawn ornaments are in front of a particular house, what color a house is and even the make and model of the vehicle at any given house on his route. He says he’s not particularly nosey, but just has an eye for detail — something that makes for a great community watch volunteer.

Not only has Chacon volunteered for the Bosque Farms Community Watch, he has consistently raised money and held fundraisers for Peanut Butter and Jelly Family Center in Albuquerque since 1993. The mission of the organization is to help at-risk children, providing parenting education in homes, therapeutic parenting programs, a child development center and more. 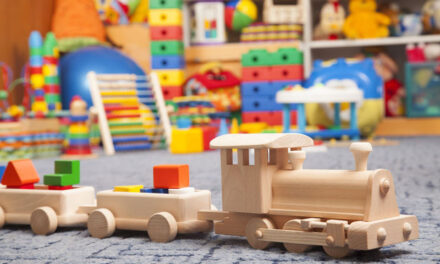 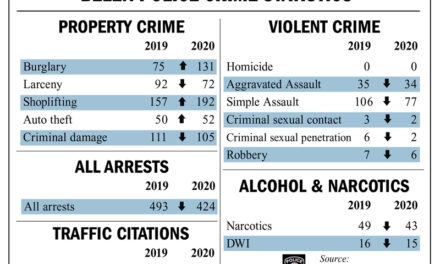 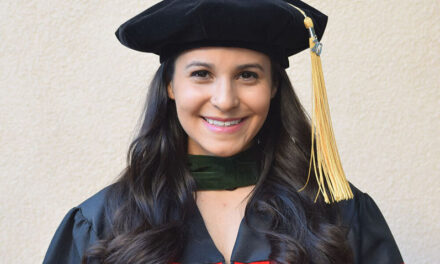