“(This project) is a super exciting win, not only for the village of Los Lunas or Valencia County, but really all of central New Mexico because that $2 billion worth of investment is basically the same amount as the Meta Data Center campus, total investment,” said Los Lunas senior economic developer Kristen Gamboa. “So, it’s really big numbers in terms of the investment, the construction jobs, and all of that is going to funnel into (gross receipts tax) and reverberate those dollars throughout the central region, primarily for Los Lunas and the county.”

Gov. Michelle Lujan Grisham announced Thursday Louisville-based capital investment group Manna Partners signed a letter of intent to purchase 1,300 acres in the village for the facility in the Central New Mexico Rail Park, west of Los Lunas along N.M. 6. They anticipate the project having an economic impact of $3.4 billion over the 10 years.

Currently, construction is set to begin by late 2023 with operations beginning in 2026.

The facility will require more than 500,000 megawatts of electricity a year, but will be powered by 100 percent renewable energy, provided by PNM. After the mill is fully operational, it is expected to have the manufacturing capacity of 1.3 billion pounds of aluminum annually.

“Manna Capital Partners’ planned investment in the Village of Los Lunas is a tremendous win for our community as we continue to work each day to retain and attract business and employees. It sends a strong message that our community is growing, thriving and an attractive place for companies to locate and succeed,” said Los Lunas Mayor Charles Griego in a press release.

Gamboa said time is on the village’s side with this project, giving it, the state and other stakeholders in this project time to address issues the village is facing, such as traffic congestion and water use.

“Even if we didn’t just win this latest project, growth is something that we would have to deal with no matter what,” she said. “The nice thing about this project, in particular, is their time frame. They are not going to break ground tomorrow — still a ways out.

“… water is one of our top issues, infrastructure is another key issue and in that, that means getting our water and sewer extension all the way to the New Mexico Railpark, and that means, largely traffic. Our congestion isn’t just because of the semis on the roads, normal wear and tear kind of thing. It’s significantly and drastically affecting our residents as well, and that is affecting our quality of life”

She said the state economic development office was notified of the village’s concerns regarding the project adding to the rapid growth of the village. Also, if the project comes to fruition, those key areas will need to be addressed within a reasonable time frame that works not only for the village, but also the other construction projects on Los Lunas’ westside.

“It’s all basically trying to put the puzzle pieces together to make it all work,” Gamboa said.

The press release said the state will pledge $5 million to the project from its Local Economic Development Act to support the project as Manna Partners reaches economic development benchmarks.

The village is also expected to act as the fiscal agent for the project, assisting with the issuance of industrial revenue bonds. However, this assistance is pending official approval by the village council and the Valencia County Commission, according to the press release.

Gamboa said since the project has just been announced and it is still in the early stages of development, she is unsure when the Los Lunas Village Council will vote on the issue, adding it is not yet scheduled for a future meeting.

“This announcement just means like, ‘Hey, the project selected our site,’ but anything beyond that — there hasn’t been any negotiations, nothing else yet,” Gamboa said. “We still have a ways to go to reach that final agreement if they do want to take us up on some type of incentive offer.” 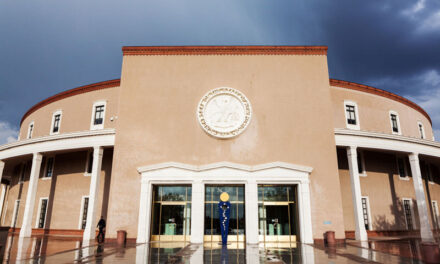