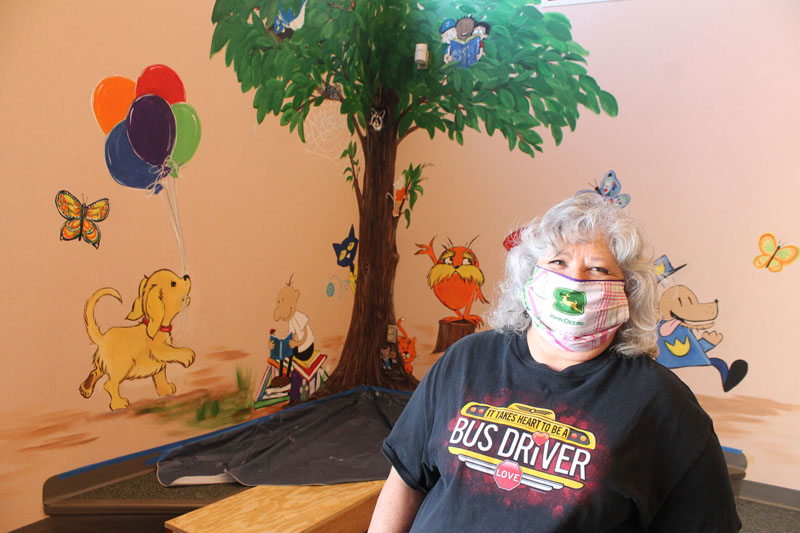 VEGUITA — The blue birds of happiness are almost finished. Once they are to her liking, painter Rebecca Chavez will sign her name to the mural in the La Promesa Elementary library.

In the reading corner of the library, which was once two blank walls, now “grows” a tree, surrounded by iconic and modern characters of children’s literature.

A lifelong doodler and painter, Chavez is currently a bus driver for Belen Consolidated Schools. She’s been a driver, or “bus mom” as she puts it, since 2003 — 13 years driving a route that served Gil Sanchez Elementary in Jarales and now in the Veguita area for La Promesa students.

“Painting got me through school. I doodled on everything,” Chavez said. “At home, when I was really young, I drew on the walls.”

The self-taught artist says she always loved school, reading, the library and art. Last year, she approached LPE Principal Cheri Montoya about painting a tree in the library’s reading corner above the three built-in risers where students sit when librarian Karen Skinner reads to them.

“She thought that was a great idea and we were thinking about maybe doing it over the summer, but then everything shut down,” Chavez said.

After months of waiting, BCS began hybrid classes in late September, and Chavez was called back to drive a bus. However, with fewer students, the routes for her and fellow drivers took less time. To meet their contract obligations, drivers are helping out at the school sites they drive for. 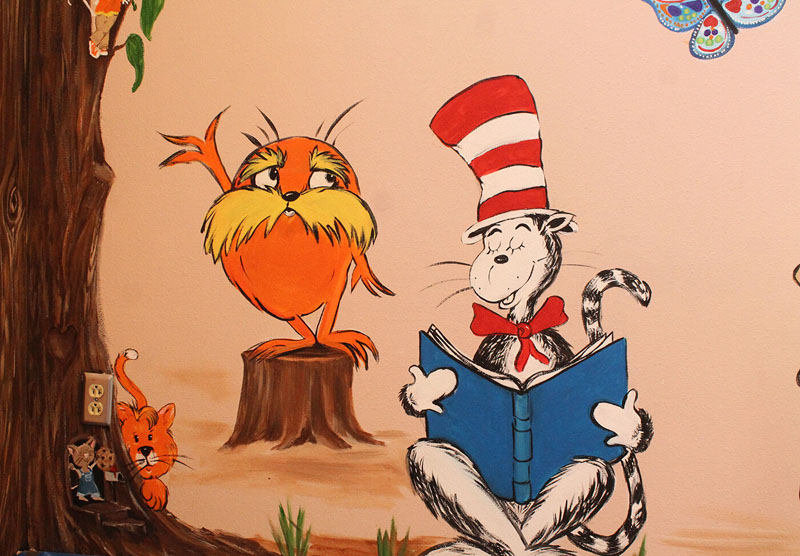 Characters from a wide array of children’s books appear in a mural being painted by local artist Rebecca Chavez in the library at La Promesa Elementary.

Characters from a wide array of children’s books appear in a mural being painted by local artist Rebecca Chavez in the library at La Promesa Elementary.

In Chavez’s case, she asked her supervisor, BCS director of support services David Carter, if she could help at La Promesa by painting a mural in the library.

“He said yes and Ms. Montoya said the magic words — ‘do what you want,’” Chavez said with a laugh.

To create an image that appeals to the students, she asked the children on her route about their favorite books. The responses were varied and for many. “The Cat in the Hat,” “Charlotte’s Web,” “Stuart Little,” “If You Give a Mouse a Cookie” and “The Very Hungry Caterpillar” were their choices.

Chavez’s grandchildren told her she had to include contemporary characters, such as “Pete the Cat,” “Man Dog” and “The Knights of the Kitchen Table.”

The walls talked to her as Chavez outlined characters such as the Lorax, the hungry caterpillar, Stuart Little and more, some hidden in the leaves of the tree, peeking out from behind the trunk, and others relaxing on the ground.

While most of the figures are from books, there are a few unnamed, mystery guests. An orange tabby at the base of the tree just appeared, she said.

“I was painting the door at the bottom of the tree, thinking I’d maybe put a fairy there, when I thought, there needs to be a cat here. I had orange paint in my hand and … then it was just there,” she said.

The raccoon in a knothole in the tree has a similar backstory.

“But look at all these books,” Chavez says, making a sweeping gesture around the sunlit room. “I’m sure they’re in here somewhere.”

As she’s works on the mural, Chavez said staff members, teachers and students stop by briefly to take a peek at the progress.

“I’ll have my earbuds in, listening to music while I work and then hear ‘oh wow’ from behind me,” she said. “Everyone has been so supportive. The principal and staff have been great. The first day, the custodian brought in three different sized ladders. He said he didn’t know which one I’d need.”

Chavez is nearly done with the mural and is putting on the finishing touches, but there is still one critical element needed before she can call it finished. In small groups, students will go to the library and finish off the mural with green paint handprints as the grass.

“This is about the kids enjoying the library — it’s theirs. They should have ownership. It’s about building a love of reading,” Chavez said. “My grandfather told me if you have a book, you can learn anything and you can go anywhere.

“With COVID, we’ve all gone through a lot but we need to remember there’s been a lot of good out of it. It’s made us slow down, look at our priorities.