Three strikes don’t mean a Belen man charged with animal cruelty is out of the court system’s game.

Hours after a judge dismissed charges against Kenneth Chavez, 27, the district attorney’s office re-filed the charges in Magistrate Court in Belen. During Chavez’s third scheduled hearing Thursday morning, Judge Danny Hawkes dismissed the misdemeanor charge without prejudice — meaning the charges could be re-filed.

Hawkes dismissed the charge because an assistant district attorney assigned to the case failed to appear for the hearing. Thursday’s hearing was the third in as many months in which the district attorney’s office wasn’t prepared to prosecute the case.

Chavez was charged with animal abuse after a local animal rights group reported a dog allegedly chained up in his yard. The criminal complaint says the female black lab cross “never moved and appeared to be dead, until it opened one eye for a moment.”

“We immediately took the dog to the vet where she was treated for extreme starvation and dehydration,” Bowers said. “When we found her, she couldn’t even stand up. She was at the vet for seven days, where she gained one pound per day.”

Bowers is currently taking care of the dog, which she’s named Emily. She said the dog has continued to recover while in her care and said Emily now weighs 48 pounds compared to 19 pounds when the dog was found.

“The temperature got down to four degrees the night before we found her, ” Bowers said.

Bowers said she was thrilled when the district attorney’s office decided to help prosecute the case against Chavez but admitted she was frustrated that it’s taken so long for it to be heard in court.

Chavez’s attorney, Greg Gaudette, said Thursday he couldn’t talk about the facts of the case but did say his client is pleading not guilty to the charges. Gaudette said both he and his client are frustrated with the district attorney’s failure to appear.

“There is no excuse for what happened,” said Deputy District Attorney Ron Lopez. “We take full responsibility for not being in court, but we did have an attorney en route. It’s unfortunate that the judge dismissed the case before we arrived.”

Lopez said the assistant district attorney assigned to the case had accidentally recorded the wrong date for the hearing on her calendar. Hawkes continued the case after the first hearing because the district attorney’s office hadn’t provided Chavez’s attorney with its witness list.

The second hearing was again continued because the district attorney’s office failed to notify the witnesses of the hearing.

Bowers said she is thrilled the district attorney’s office has refilled the charge and said she will work with them in any way she can.

If convicted of the charge, Chavez could be facing 90 days in jail and/or a $300 fine. 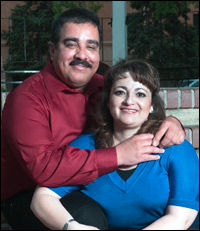 Fires down since restrictions set up