With two doubleheaders on the road already under their belts, the Belen High School baseball team is ready for their home-opener on Saturday.

The Eagles will meet Española Valley for a doubleheader beginning at 10 a.m.

Belen is 2-2 after its first four games — splitting doubleheaders at Gallup last Saturday and Socorro on Tuesday.

This year’s Eagles sport six seniors this year and five returnees from last year’s varsity squad. With a team that is stacked with juniors and seniors, the Eagles could be contenders in District 3-4A this season.

“I really feel like our offense is clicking,” head coach Mike Gutierrez said of his team, which scored 21 runs in a doubleheader against Socorro on Tuesday.

But despite their offensive success, Gutierrez feels like there are still some things they need to do to get into top form.

“We have left some runners on base, so there is room for improvement,” Gutierrez said. “We need to tighten things up offensively.”

Returning to the squad from last year’s team are seniors Michael Garcia at shortstop, Michael John Schmock heading up the pitching staff splitting time at first base, Robert Rimorin in the outfield and Eric Gregor as a utility player. The only junior returning from last year’s team is second baseman Steven Sanchez.

These returnees are key to the Eagles’ success this year, according to Gutierrez.

“What we really need to happen on this team is for the older guys to step up and take the lead,” Gutierrez said.

Rounding out the Eagles’ squad will be two more seniors new to the team this year. Angelo Gabaldon plays third base and is second in the pitching rotation. Steven Gutierrez handles catching chores.

Chris Sonnenberg, a junior who saw time on the junior varsity squad last year, will be sharing time at first base and on the mound. And in the outfield, Robert and Randy Case, a junior and a sophomore respectively, both came up from the JV squad.

Rivera will be sharing time in the outfield and may also do some pitching as the season progresses, as will Bobby Baca. Jared Schmock is listed as the second of the two utility players.

The district favorites this year are the Deming Wildcats and the Las Cruces Oñate Knights, leaving no room for complacency in the Eagle lineup, according to Gutierrez.

“Our pitching still needs to come around,” the coach said. “We got ourselves into some good pitcher’s counts, and we just gave them too fat of pitches. We just didn’t throw quality pitches when we needed to get outs.” 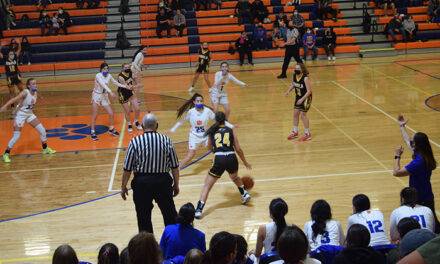