Belen’s Iron Pigs softball team — comprised primarily of city workers and a few family invitees — seemed well on its way to a second-straight win over Albuquerque.

The Belen vs. Burque game was held Saturday, July 13, at Tingley Park in Albuquerque. A player for the Belen Iron Pigs jumps up to catch the ball.

Then the ringer stepped to the plate. The result was a massive, three-run bomb that turned around a 6-5 Belen lead and the Iron Pigs eventually lost 9-7 on Saturday in the friendly Belen-Burque Middle Rio Challenge between the cities.

“It was a lot of good spirit and everybody seemed to be working hard out on the field,” said Belen Mayor Jerah Cordova, who was 0-1 with a walk in his two plate appearances. “We had a darn good game. It looks like we’re 1-1 so at this point it looks like we’re going to need a rematch to break the tie.”

At stake were samples from Jaramillo Vineyards on the Belen side, while Albuquerque proffered Rude Boy Cookies and beverages from Tractor Brewing Company.

While Albuquerque walked off with the goods, both mayors said they can see a tiebreaker in the future.

“We’d love to play Albuquerque again,” Cordova said, “We’re 1-1 so we have the opportunity now to break that tie. We’re hoping to make it an annual challenge. They said they want to come to Belen for a night game.”

But Albuquerque Mayor Tim Keller made no apologies for enlisting a little outside help for the game.

“The Belen team, they’re professional and they’re very good,” Keller said. “We did want to step up our game because we knew we had some legit competition. And so it helps when you’re a big town. We had a few former professional athletes. A former minor leaguer and a former D-I softball catcher.”

It was that minor leaguer, Russell Goins, who hit the game-winner with a shot well over the fence.

Despite the outcome, smiles were plentiful among the Iron Pigs.

“It was fun,” said Belen centerfielder Diana Salinas, at 17 the youngest player on the field and something of a ringer herself as she’s a senior at Albuquerque High School and a member of the Bulldogs softball team.

“I feel like there was a lot of pressure and you had to do good. So I had to do good,” said Salinas, who singled in both her times up, with an RBI. “I think it just brings a lot of people together and it was cool. I got to meet new people and it was fun.”

She’s the niece of acting Belen police chief Sgt. José Natividad, who also had a number of other family members and friends playing for the Iron Pigs.

“It was intense,” Natividad said. “I think there was just a little bit more pressure for what it meant to the community. At the end of the day, everybody relaxed and we all had fun. It was a really tight-knit game and it came down to the last out. So it was a good game. It was fun.” 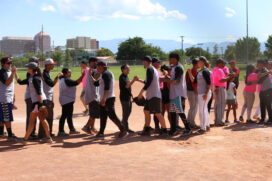 The Belen Iron Pigs and Albuquerque softball teams congratulate each other on a good game after the Belen-Burque Mid Rio Challenge last Saturday morning.

It was also a good way for the city workers of the two cities to mingle, said Belen police officer Mario Vallejos.

“It was exciting,” Vallejos said. “I think it’s really awesome when two different cities can come together like that and play a game. I think it shows a lot. It brings camaraderie for the employees of the city and I’m sure it does for employees for the city of Albuquerque as well.”

And just getting a chance to interact away from the pressures of the office is always a good thing, Cordova said.

“It good for them to come together, work together in a different way and have some fun,” he said. “When we’re in City Hall in all of our departments and all over the city, there can be a lot of stress and softball is a good way to relieve it.” 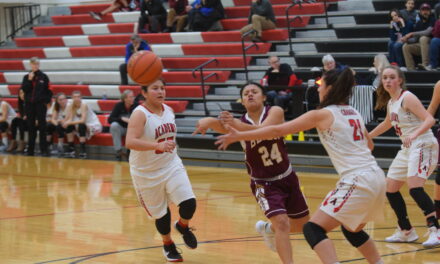