BELEN—It’s unknown what led to the amount of some crimes in the Hub City decreasing last year while others increased, but the new police chief has his theories — a shortage of officers and low morale within the department.

During a recent city council meeting, BPD Chief James Harris provided the councilors and the public with crime statistics from 2019 compared to the prior year. Harris, who was appointed to the position in January, said there can be many factors that could have affected the numbers. 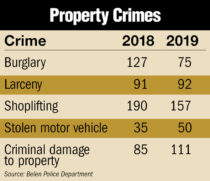 According to the statistics provided by Harris, the number of burglaries reported to and investigated by the Belen Police Department went from 127 cases in 2018 to 75 last year — a nearly 41 percent decrease. 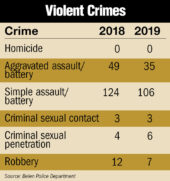 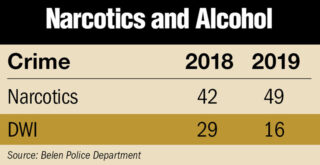 According to the statistics reported by Harris, the number of narcotic-related crimes in Belen increased last year to 49, compared to 42 in 2018. There were 29 DWI arrests made by Belen police officers in 2018, while 16 were made last year — a 45 percent decrease.

Harris reported to the council there were a total of 843 arrests made by Belen police officers in 2018, compared to only 493 arrests in 2019 — a 42 percent decrease.

Questions from the council

Councilor Robert Noblin asked the new police chief why fewer citations were given and less arrests were made.

“The first thing that comes to mind is the lack of manpower,” Harris told the council. “During the first portion of the year, we lost of significant amount of workforce in the Belen Police Department.

When asked by Councilor Danny Bernal Jr. about what his plans were to address the problems in the department, Harris told him he’s already working on solutions.

Harris has already promoted one sergeant to a command-staff lieutenant’s position, and is in the process of writing a test for three sergeant exams he hopes will be filled by three patrol officers in the next few months.

The new chief said he has two officers who are attending the academy, and hopes to have them out in the field within six months.

“We have Sarah Martinez, who just graduated the academy, and is in the second phase of her field officer program,” Harris said. “She’ll be on her own in the next month and a half.”

With plans to build the force up to full capacity, the chief said he is currently going over several applications to see who could be a good fit for the Belen Police Department.

As for the morale issue of the officers, Harris said he has an open-door policy and is giving officers the opportunity to meet with him one on one to discuss issues.

“One officer is interested in creating a tactical team,” Harris said. “I asked him to provide me with numbers and how we can pay for it. I’m giving him the latitude to move forward with my approval.”

Harris also told the council he is giving officers a more active role in the decision-making process of the department, saying he wants officers to work with him instead of against him. 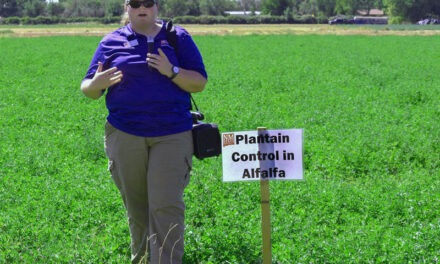