BELEN—The Belen Public Library has been awarded a $2,000 grant to help achieve a complete 2020 U.S. Census count within its service area.

The grant will allow the library to do outreach and provide computer access and assistance to people in southern Valencia and northern Socorro counties to help fill out their Census questionnaires online.

“The library serves everyone, and an accurate Census count is important,” said Belen Public Library Director Kathleen Pickering. “We have the resources for the community to use and can offer them assistance.

“As a (city) department, we see the importance of an accurate Census count. So often we hear, ‘Sorry, we don’t have the money for that.’ It all stems from an accurate count.”

This year, the U.S. Census Bureau has made online responses to the 10-question form a priority rather than door-to-door canvassing.

While that might sound simple for most people, Pickering and her staff are acutely aware that lack of internet access and computer skills among people living in rural, sparsely-populated communities can make that difficult.

“A large number of residents in our service area have no regular access to the internet or the necessary, basic computer skills to access the Census website,” she said. “We know this from the people we see here at the library’s lab.”

The library’s service area includes five Census tracts across the two counties that were severely under-counted in the 2010 Census, an area the U.S. Census Bureau itself described as among “the hardest to count in the country.”

The data gathered in the 2010 Census shows 35 percent or more of the people in the Census tracts the library serves do not have internet access, the library director said.

Pickering said the grant, provided by the American Library Association to create the Library Census Equity Fund, will be used, in part, to increase the hours of the library’s Computer Learning Lab coach and hire a work-study intern from The University of New Mexico-Valencia campus in order to provide on-site help to people using the library’s 48 public access computers to fill out their Census forms.

“We can help them navigate to the Census website and with technical issues, but we cannot help them answer the questions,” Pickering said

The grant will also be used for outreach throughout the library’s coverage area to let people know they can come to the library and get free help to complete the Census online, even if they have absolutely no computer knowledge.

Census results are used to determine a state’s congressional representation, and the types and amounts of federal funding it will receive for the next 10 years.

It is estimated the 2010 statewide undercount has cost New Mexico, its counties, its municipalities and its Native American communities millions of dollars in funding they were entitled to over the decade.

Starting on March 12, the bureau will mail out invitations to respond online to the Census to physical mailing addresses, Pickering said. The postcard invitation will also include an ID number that recipients can use online, but aren’t required to.

“You may get it, you may not,” Pickering said. “Either way, you can still come to the library and fill out your Census information online.”

If people want to respond to the Census by phone, which offers more than a dozen different language options, Pickering said there will be telephones available at the library in private conference rooms.

The 10-question Census questionnaire does not contain a citizenship question for 2020, Pickering said, and asks for basic information about each member of a household, such as age and sex.

According to the 2020census.gov website, during the Census, the bureau will never ask questions such as a person’s Social Security number, money or a donation, anything pertaining to a political party or bank or credit card information.

Once a Census questionnaire has been completed online, by phone or mail the bureau will not send an enumerator to a person’s home.

“Another large reason for undercounts is people are unwilling to let Census takers into their homes,” Pickering said. “So, this is an opportunity to get it done and you won’t have to worry about it.”

People may self report for the 2020 Census from March 12 through April 30.

“Taking the Census should be as easy as voting,” Pickering said, “and it’s just as important.” 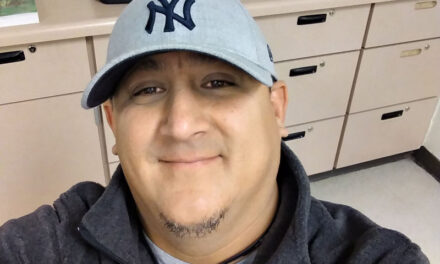