BELEN — The first collaborative effort to control flooding in Belen was initiated this week when the city and the Middle Rio Grande Conservancy District agreed to work together.

The Belen City Council and the MRGCD Board of Directors both approved a memorandum of understanding in which they agree to help prevent west mesa arroyo rain flows from breaching irrigation ditches and flooding the Hub City.

Belen City Manager Andrew Salas told the council Monday night the two entities have been working on the MOU for some time.

“We’re building a series of west-side ponds, and the general agreement is for the conservancy to allow us to discharge into the Belen Highline Canal in a controlled manner so we won’t silt up the canal or introduce any toxins into the irrigation system,” Salas said.

“So we get to discharge from our west-side ponds, extending (the MRGCD’s) capacity to accommodate flood waters coming down from the arroyos,” the city manager said. “It also provides water downstream for farmers and for the Interstate Compact responsibilities.”

According to the MOU, city officials agrees to “continue designing, building, strengthening and rehabilitating detention ponds to blunt and capture storm water and arroyo flows that originate adjacent to the west mesa.”

The initial affected area is West Aragon Street to the south to Camino Del Llano.

The city will construct two detention ponds west of the MRGCD’s Belen Highline Canal, and some adjacent to the canal and others farther west, including at the Interstate-25 Frontage Road. 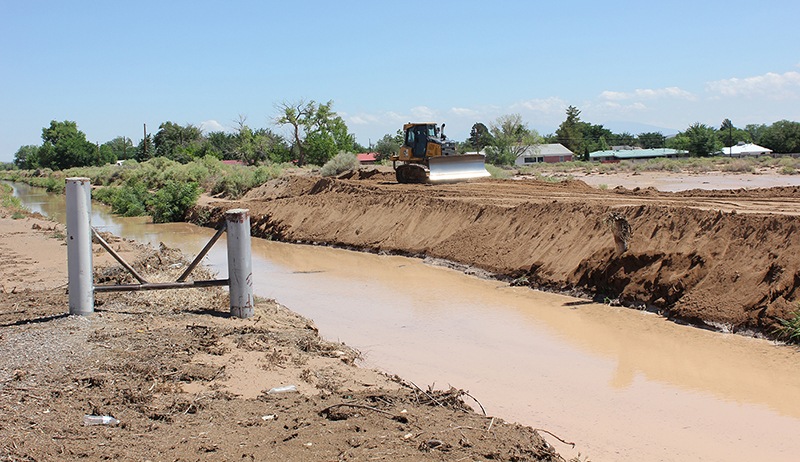 News-Bulletin file photo
Crews shore up the Belen Highline Canal at Delgado Avenue after major breach that sent millions of gallons of water into the city of Belen in 2021.

MRGCD agrees to work with city officials in reviewing the “design and construction of outflow devices from the detention ponds into the Belen Highline Canal in such a manner as to eliminate excessive silt and at a flow rate that the canal can safely handle with the goal that storm water flows would therefore be prevented from breaching or overtopping the MRGCD irrigation channels and would be captured for conveyance downstream for irrigation or conveyance to the Rio Grande.”

“This is a long time coming,” said Councilor Frank Ortega. “We’ve been fighting for flood control, especially since 2017. It will upgrade our master plan.”

Ortega asked if the MOU with the MRGCD will help initiate a flood control authority. Salas said it’s still in the plans, and hopes it would be a county-wide board.

“We’re ultimately going for a flood control authority with grand projects, including a flood conveyance channel on the west mesa,” Salas said.

Councilor Danny Bernal Jr. said he was concerned about liability given the fact MRCGD has been sued over recent flood events.

“This helps to cover your concern that we are not brought into a situation that we will be held liable for putting water into the Highline Canal and then having it breach down south,” Salas said. “This helps to safeguard the city from spurious claims. This is protecting us from the actions of the other.”

The MOU makes it clear that the city and the MRGCD agree to hold each other harmless from and against loss, damage, injury and liability arising from the negligent actions of the other.

Ortega said he was happy the two entities are taking steps to work together.

“Our constituents feel we haven’t done enough for flood control, and if something happens to their home or property, they can still sue. There’s nothing to stop them from doing that,” Ortega said. “What we’re trying to do now is to get together to solve a problem — a big problem.

“There’s no way we can stop the watershed … and that’s what’s hurting us,” he added. “Hopefully some of these holding ponds will help because it will be controlled. At least this is something we can do to go forward.”

Belen Mayor Robert Noblin said while defining negligence includes a bit of ignorance, the city has been anything but ignorant when addressing flooding.

“I’m glad to see this coming full circle,” Noblin said. “Our constituents, our citizens, deserve it, and we are doing what we can. I appreciate the MRGCD’s partnership.”

The city manager said this MOU with the MRGCD is a culmination of work from this and past councils.

“This is really game changing,” Salas said. “We’ve never seen this type of collaboration before … I think the people of Belen should be rightfully proud of the decision-making that’s been taking place to control the flooding coming off the west mesa.” 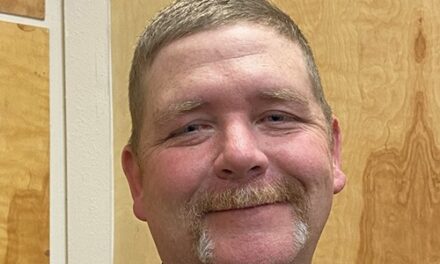 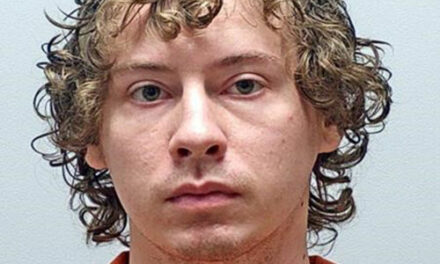