Belen native Sarah Salazar achieved success this year on and off the court as a tennis player and student at Eastern New Mexico University in Portales.

Salazar, who graduated from St. Pius X in 1999 and just completed her third year at ENMU, earned all-academic honors in the Lone Star Athletic Conference by achieving a 3.25 grade point average. She is majoring in sports communications.

On the tennis court, Salazar had a 10-10 singles record and a 16-5 doubles record this past season. Salazar started out slow this season in doubles, going 5-5 to start the year. After changing partners midway through the season, she didn’t lose a match.

Salazar said the mental part of the game is the most important aspect of the game, and her improvement in that area has made her a better player.

“I used to get down on myself when I would lose a point,” Salazar said. “If I let myself do that, I take myself out of the game.”

Salazar, who will be a senior in the fall, said she will miss the competition after her collegiate career is over.

“I have been playing tennis since I was 6,” she said. “It’s kind of sad thinking this will be my last year.”

Despite the realization that her next year will be her last, Salazar is excited about her senior season.

“I just really want to finish knowing I did my best,” she said. “And I want to know I left a mark on the school and the younger players.”

Salazar said she likes helping the younger players. Whether she is helping them adjust to their new surroundings or helping with their drop shot, she tries to make herself available to them.

“When we do drills I like to tell the younger players what they’re doing wrong,” Salazar said. “It helps to give them confidence, and confidence is very important in this game.”

Perhaps Salazar likes working with the younger players because she knows what they’re going through. When she first went to school at ENMU, she wasn’t sure of what she might find at the college level. It helped that two of her teammates at Eastern are from the Albuquerque area.

“Being on a team with people I know really helped out,” she said. “But tennis helped me to meet new people here.”

Another thing that made the transition a little smoother was the similarity of the size of her high school and college.

“They’re both small schools,” Salazar said. “That made it a little easier too. When you see the (Athletic Director) and the other athletes at the games, it really helps you. Plus, the community is very supportive of the school here.”

In her three years at Eastern, Salazar has amassed a 25-27 career singles record and a 35-29 doubles mark.

When her tennis career does come to an end, Salazar hopes to stay close to the game. She plans on becoming a sports broadcaster when she finishes college. 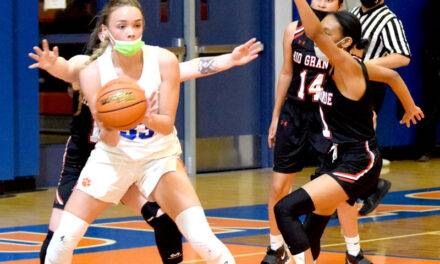