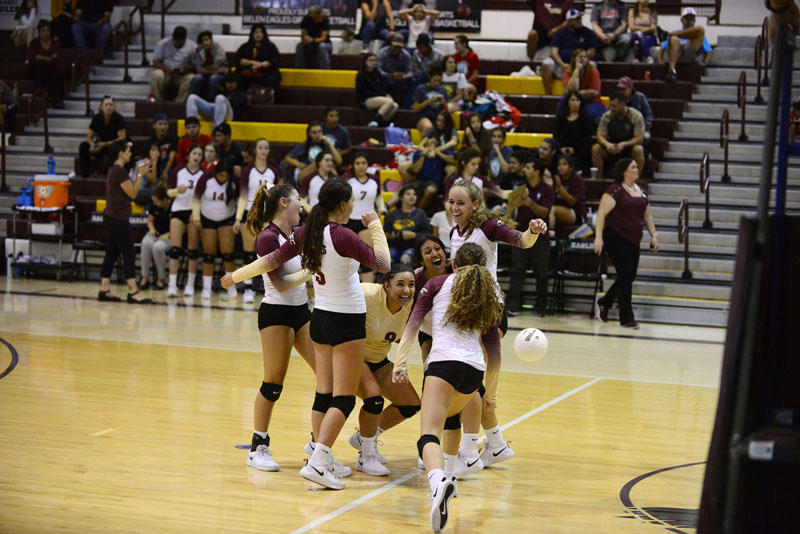 Belen overcame the difficulties it had been having in the second set on Tuesday and came away with a straight-set win over Valencia to open district play, 25-20, 25-19, 25-17.

In the first set, Belen jumped out to an early lead thanks in part to some unforced errors from the Jaguars and forced Valencia to take their first timeout of the match down 13-6.

Mistakes continued to plague VHS, and head coach Eric Zamora was forced to use his second timeout down 18-10.

Initially, the Jaguars didn’t seem to have improved following the timeout, which was highlighted by a miscommunication that allowed a ball to drop in the center of the court.

But following the miscue, VHS played much better and were able to rally back and force a timeout from the Eagles at 23-16 after going on a bit of a scoring run thanks in large part to improved play at the net.

The deficit was too much to overcome in the end, as BHS settled back down to win the set 25-20.

The second set was much more even than the first, with the two sides trading points for much of the early part of the set and neither side was able to build much of a lead.

Belen finally was able to gain a bit of separation and force a timeout from VHS at 21-18, and then another at 23-19.

“We really needed this win, game two has been the death of us all season long so when we conquered set two that was a big feat for us,” Belen head coach Andrea Montano said.

The Jaguars had cleaned things up considerably, but unforced errors were still giving the Eagles an edge, but Montano said that the biggest thing she noticed from her team was that they kept a more positive attitude than they have been in earlier games this season.

In the third set, it started out as a polar opposite of the first. VHS jumped out to a quick 4-0 lead and forcing an early timeout from Belen to try and settle things down

The timeout worked just as any coach would hope for, and BHS rattled off five straight points after giving up the first one out of the timeout to tie the game at five-all, but the message in the huddle to set up the rally was a simple one.

“Stay focused, we tend to get these leads and a lot of momentum and then let one or two points take us down,” Montano said. ”We’ve been putting a lot of pressure on them in practice to push through those situations and stay focused.”

After that, it was all Belen.

By the time that VHS took its first timeout of the set at 20-15, the Eagles were on a 20-10 run. Even after the timeout, frustrations seemed to be boiling over for VHS, and it used its second timeout a point later, but it only delayed the end result as Belen took the set 25-17 and the match.

Valencia will return home tonight for a match with St. Pius X with the Varsity match scheduled for 6 p.m.

Next up for the Eagles is a trip to Los Lunas tonight at 6 p.m. When asked about the rivalry match, Montano only said one thing. “We’re ready.”