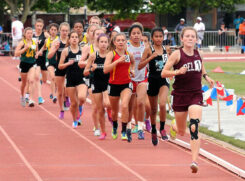 Following a highly successful career as a student athlete at Belen High School, 2016 graduate Arena Lewis has now completed an equally successful career at Hillsdale College in Hillsdale, Mich. She chose Hillsdale over several other collegiate offers because of its excellent scholastic reputation as well as its strong athletic program.

Highlighting her senior year was her nomination by the Hillsdale College athletic department for the 2020 NCAA Woman of the Year award, which recognizes graduating female student athletes who have distinguished themselves in academics, athletics, service and leadership throughout their collegiate careers. She earned her conference’s nomination for the award, but was not one of the nine finalists selected by the NCAA.

Lews graduated from BHS as the valedictorian and as an outstanding athlete. She amassed numerous top finishes in cross country and track and field. During her junior year she was 3-5A cross country district champ and a runner-up at the state championships. In her senior year, she won both titles. She was a two-time 4A state champion in both the 1600 meter and 3200 meter runs.

In addition to her top high school finishes, in her senior year she won the 1600 meter run at the prestigious Sepulveda Classic, an individual only meet featuring top track and field athletes in New Mexico. In her senior year, she also won the 3200 meter in the Nike Rotary Elite Session track and field meet in Chandler, Ariz. with a time of 10:48.47, which was the 15th fastest time in the nation that year. In recognition of her high school athletic achievements, she recently was voted as a Decades Top Distance Runner in a NM Milesplit poll.

Growing up, Lewis also played softball and swam for the Belen Hurricanes. During her senior year, she was a member of the Eagles first ever state qualifying 4×400 freestyle relay team.

She attributes her love for running to her mother, Rebecca, who encouraged her from an early age and to her father, Rex, who has supported her throughout her career. She would like to extend her thanks to all her coaches, teachers and friends who have helped every step of the way.