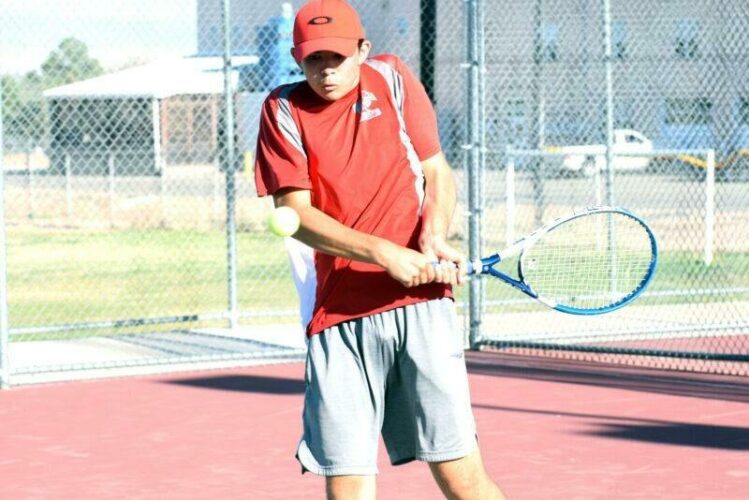 The Belen girls hot season wrapped up with an 8-1 win over Grants on Tuesday, followed by a 9-0 win over Valencia on Wednesday to clinch the regular season championship in District 1/5-4A.

“With passion, perseverance and talent is how these girls play,” Belen head coach Chrissy Cordova said after the match. “These girls play to win, try to win every game, play hard every game and losing was not acceptable because they know their capabilities.”

The Lady Eagles finished with a perfect 6-0 record during district play this season, making it four seasons in a row in which they have gone undefeated in their district.

Senior Riley Cordova finished undefeated in district play in both the individual and doubles matches.

Against Grants, Cordova beat Chloe Rychener 8-1. While against Valencia, Cordova beat Antigone Genson 8-2 to finish the singles district season with a perfect record.

On the doubles side against Grants, Cordova and Isabella Jaramillo defeated Rychener and Kynlie Cash, 6-1, 6-1. Then against Valencia, the Cordova-Jaramillo duo beat Genson and Jenny Schaefer 6-0, 6-1 to finish off the doubles district regular season unblemished.

The Valencia boys took down Belen and Grants last week on their way to a three-way tie with Belen and St. Pius for the regular season district crown.

Against Belen, the Jaguars took home a 5-4 win overall, powered by three wins in the singles matches.

The Jaguars then followed that with a 9-0 win over Grants the following day to lock up a 5-1 record in district action. The final district record is the best that the Jaguars have ever finished in district play.

“We’ll have to see if we get an at-large bid,” Valencia head coach Matthew Castillo said. “St. Pius beat us on tie-breaker for district. If we do get an at-large bid, our boys can make a run. We’re really strong at number one and number two with Xavier and Isaiah Castillo.”

The Distict 1/5-4A tournament will be held on Friday afternoon at Jerry Cline Tennis Center in Albuquerque.

The New Mexico high school state tennis championships will be held on May 4-7 at Jerry Cline Tennis Center, Albuquerque Academy and Sierra Vista Complex in Albuquerque.