Belen Police Chief James Harris presented the department’s crime statistics to the city council last week, saying his officers and staff continue to work hard and to protect and serve.

According to the statistics provided by the chief, the slight reduction of both violent and property crimes in the Hub City is welcomed.

Harris began his presentation to the council by introducing the newest officer to the force, Nicholas Reyes, who started in February, and will attend the Bernalillo County Sheriff’s Academy later this year.

The police chief also briefed the councilors on a couple of initiatives the BPD is implementing, including the Broken Windows Task Force. 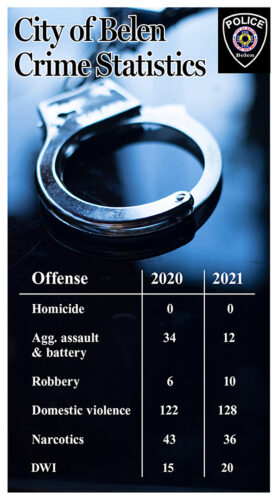 “We are working with other city departments, including code enforcement, animal control, planning and zoning and the fire department …,” Harris said. “This initiative is meant to target vacant, run down, unkept or unsafe, or structurally unsound residences and commercial buildings, as well as targeting other quality-of-life crimes and issues such as vagrancy, panhandling, homelessness and stray animals.”

The chief said enforcement of these issues will range from education to criminal and civil citations, and in extreme cases, arrests and incarceration of offenders.

The BPD, along with other local law enforcement agencies, are also taking part in an initiative developed by Valencia County Sheriff Denise Vigil.

“(We are) working with agencies across the county on a joint operations regarding traffic issues in all the different jurisdictions,” the chief said. “So far, we’ve worked six separate operations, two in Belen. We’ve received a lot of positive feedback as a result of these operations.”

The chief said the officers continue to work diligently, and currently only has one position to fill. Harris said he does have a qualified applicant, and hopes to hire soon.

Harris first presented the statistics regarding property crime, saying there was a significant decrease, with the exception of shoplifting.

“My belief, the rise in shoplifting cases could be attributed, at least in part, to the wide-spread use of self-checkout lines, where skip-scanning is very common.”

According to the statistics provided by the chief, the number of shoplifting cases in the city of Belen increased from 192 cases in 2020, to 262 in 2021.

The number of stolen vehicles went down from 52 two years ago, to 36 in 2021. The incidents of criminal damage to property decreased from 105 in 2020 to only 54 cases last year.

“Our violent crimes also went down considerably,” Harris said. “We had no homicides in 2020 and none in 2021.” 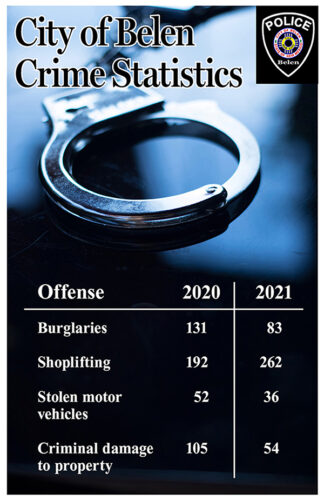 When asked by Councilor Steve Holdman what the department’s biggest challenge is, Harris said it’s the retention of police officers.

“Our biggest challenge right now is trying to keep our officers here where they belong,” Harris said. “We have a lot of agencies out there that are offering much better benefits that we can offer here.”

Councilor Danny Bernal Jr. said he was a victim of a burglary last year, and asked the chief if he knew how many of those who had been charged with burglary have been convicted.

“That’s a question to ask the courts,” Harris told the councilor. “I can tell you we have arrested a large number of these individuals, we have recovered a large amount of stolen property. Just in 2021, we’ve booked in more than 600 pieces into our evidence room.

“We are prosecuting them, but, unfortunately, the way our court system works right now, they are getting out prior to being convicted, they are out victimizing others before they actually get convicted of a crime.”

Harris said his officers rarely don’t show up for court, and there are times when offenders’ cases are dismissed because the victims don’t cooperate and defendants fail to appear in court or even flee the jurisdiction.

“It’s getting better, and we’re working very closely with our district attorney’s office,” Harris said. “We are also meeting with all the other (law enforcement) agencies once a month and are sharing information.” 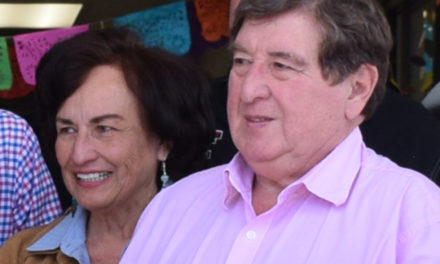 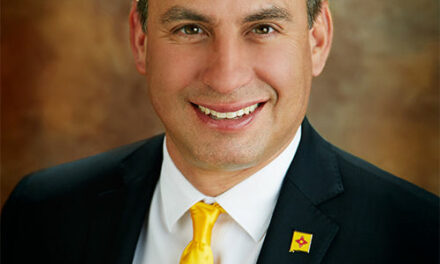