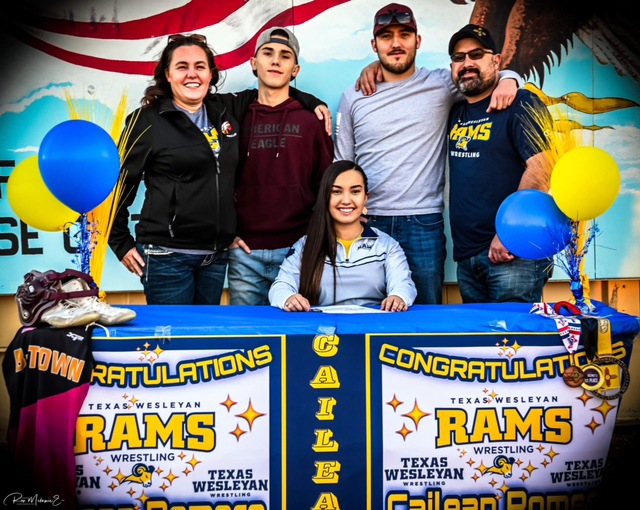 Belen wrestler Cailean Romero has signed to continue her career at Texas Wesleyan next fall following her graduation from Belen High School.

Romero, who finished third in the state at 113 pounds in the first year of girl’s wrestling last winter, will likely be wrestling at 123 pounds when she gets to college, as the Rams have a need in the weight class, and she’ll be able to slot in immediately.

The program at TWU is new, having completed its first season last year during the 2019-20 school year. Led by head coach Ray Bedford, who previously worked to prepare high school wrestlers for college, and who just so happened to be friends with Romero’s father on Facebook, which is how the connection was initially made between her and the program after Romero was admitted to the university.

“My family is moving to Fort Worth soon,” Romero said. ”I wanted to stay near them so I was applying to schools in that area including Texas Wesleyan. After I was admitted, my dad was friends with the coach on Facebook and he reached out and we connected from there.”

The process took a little over a week, Romero was admitted on Feb. 3rd and heard from Bedford for the first time on the ninth. From there, the two talked and decided it would be a good fit, and went through the steps to get Romero set up with the program, including her receiving an athletic scholarship, in addition to the scholarships she received from the school for her work in the classroom.

“I was able to ask him the majority of the questions I had the first time we talked,” Romero said. “He seems to me like he’s a really good coach, I’m excited to get out there and get to wrestle for him.

“They wanted me to come down at the beginning of the summer, but since we’re moving not long after that I’m going to wait until then and then go in.”

Submitted photo
Cailean Romero poses with her family at a ceremony to celebrate her signing with Texas Wesleyan to continue wrestling in college. Romero is a senior at Belen High School.

Texas Wesleyan competes as part of the National Association of Intercollegiate Athletics in the Sooner Athletic Conference which is composed of 11 schools located in Texas, Oklahoma and Kansas.

Last year, in the Rams first season of competition, the team placed fifth out of eight teams who competed at the SAC championships and improved on that finish this season, placing fourth with two wrestlers winning individual championships. The NAIA championships will take place beginning on Friday, March 12.

In addition to Texas Wesleyan, Romero also considered Lion College and Ottawa University in Arizona, as well as Central Methodist University which is located in Missouri among others, but ultimately being close to family won out and helped her land on TWU.

“I’m really excited about it,” Romero said. “I didn’t think I was going to have a season this year so I’m excited that I’ll be able to keep wrestling regardless of what happens the rest of this year. It’s nice to have that insurance.

“I’m excited that I’ll be able to go out and make some more history for Belen on the wrestling mat before it’s all said and done.”

Once Romero lands on campus at TWU, she plans to major in either psychology or criminal justice, as she hopes to one day work for the FBI.

“I can’t thank my family and my coaches enough for helping me to get to this point,” Romero said. “I couldn’t have done any of this without them. I need to thank the community here in Belen too. Everyone has been so supportive and shown me nothing but love through all of this.” 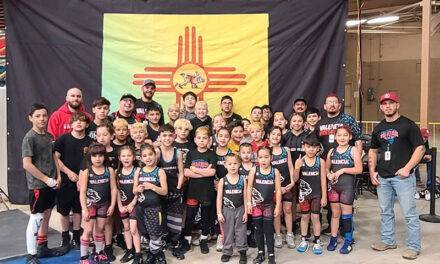