(Editor’s note: The expected launch time and date for the James Webb Space Telescope was changed after News-Bulletin press time. This story has been updated to reflect the new, expected launch date.)

BELEN — Dozens of third-grade students at Central Elementary School got the inside scoop on a new NASA space telescope due to launch next week, thanks to the Belen Public Library being part of the NASA @ My Library program.

Julia M. Dendinger | News-Bulletin photo
Mike Shinabery, an educational specialist with the New Mexico Museum of Space History, gives Central Elementary students a virtual tour of the solar system before they learn about the James Webb Space Telescope, which will be launched next week.

Live coverage will air on NASA TV, the NASA app and the agency’s website, nasa.gov/live.

The Webb telescope is set to replace the Hubble Space Telescope, which was launched in 1990 and has been peering into the cosmos more than twice as long as its 15 year life expectancy.

Getting the largest space telescope into space has taken some creative thinking. Since the mirror and sunshade won’t fit onto the Ariane 5 rocket fully open, both will fold up and then open once the Webb is in outer space.

“It’s part origami, part Transformer,” Dooling told the students. “Some of the parts are as delicate as a spider web.”

Once the telescope is launched, it will take a month to unfold fully and another five months to calibrate the telescope, he said.

The telescope, named after the NASA administrator who crafted the Apollo program and was a staunch supporter of space science, will have a large primary mirror, 6.5 meters (21.3 feet) in diameter and a sunshield the size of a tennis court. In comparison, the Hubble is only eight feet in diameter.

The Webb’s mirrors are coated in a thin layer of gold, enough to make a golf ball, Dooling said.

Webb’s instruments are designed to work primarily in the infrared range of the electromagnetic spectrum and will operate at extremely cold temperatures, about 13 degrees above absolute zero, which is the lowest temperature that is theoretically possible, at which the motion of particles that constitutes heat would be minimal, or the equivalent of –459.67 degrees Fahrenheit. 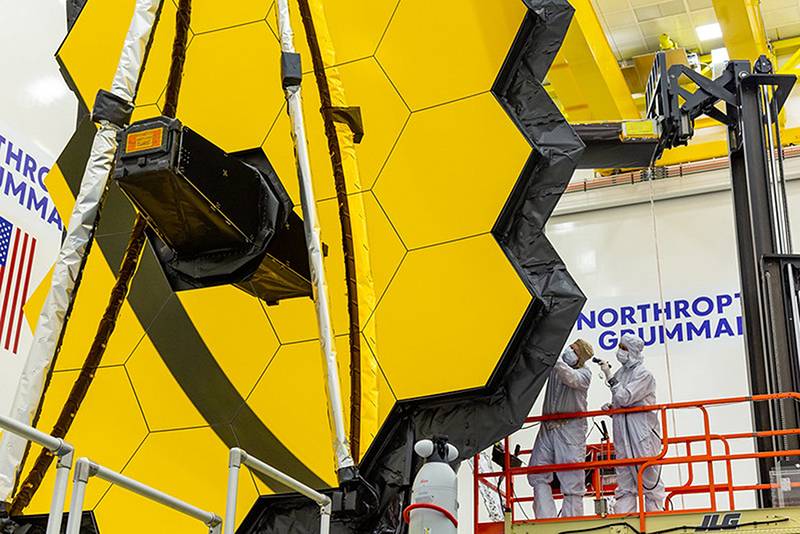 Photo courtesy of Northrop Grumman
This image was captured during Webb’s final tests when the 6.5 meter (21 feet, 4 inch) mirror was commanded to fully expand and lock itself into place, just like it would in space.

While the telescope needs to be at an extremely low temperature, it will need to get there slowly.

“It will be cooled slowly,” Dooling said. “What happens if you cool something off quickly? It shrinks and breaks. They have to be extremely careful because once it’s up there, it’s up there.”

The telescope will be a million miles from Earth, in a balance point, where it will coast and orbit the Sun while taking pictures further into space than ever before, Dooling said.

Because the Webb can’t get overheated, it’s equipped with a five layer, insulated sunshield, which will be between the Sun and the telescope mirror that will be positioned to keep the entire structure’s “back” to the sun as it orbits Sun and takes pictures.

When the Hubble was launched, Dooling said scientists had a list of objectives they hoped the then state-of-the-art telescope would achieve.

“The top five things the Hubble discovered weren’t even on the list,” he said. “They found them just by looking.”

During it’s time in space, images from Hubble helped construct the largest scale 3-D maps scientists have of where dark matter is distributed in the universe.

It discovered two new moons of Pluto, detected gamma ray bursts — the most powerful explosions known in the universe, advanced science’s knowledge of extrasolar planets and helped scientists refine the estimated age of the universe to roughly 13.75 billion years.

“I can’t wait to see what the Webb discovers,” Dooling said. “It will be able to see back to the beginning of time.” 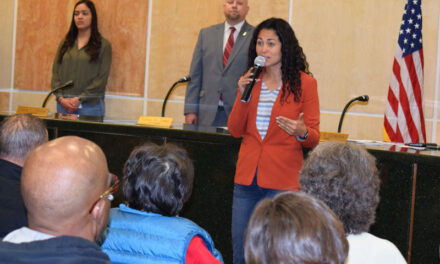