A two-year-old Belen girl is in critical condition in an Albuquerque hospital while her mother and another man have been arrested and charged with child abuse.

Belen Police Detective Joe Griego said he learned of the case when doctor’s from the University of New Mexico Hospital in Albuquerque called him on Sunday and informed him of the condition of the child.

“Belen’s Rescue 8 had been dispatched to a house at 519 Baca where they found a child who wasn’t breathing,” Griego said. “They gave her CPR and took her to the hospital.”

When the two-year-old arrived at the hospital, the doctor’s observed a large abrasion on the right side of her head and bruising all over her body. X-rays were taken as well, which revealed she had a brain injury, Griego said.

“When I got to the hospital, the doctor told me she didn’t know if the baby was going to make it,” he said. “Now, she’s in critical but stable condition. From what the doctors said, she has swelling in her brain, which is slowly going down.”

The two-year-old girl is currently in a medically induced coma.

The x-rays also showed the toddler had sustained a prior, untreated broken right arm. Griego said he learned the child had previously complained that her arm had been hurting for about three to four weeks, but her mother hadn’t taken her daughter to a doctor to get it checked.

“I went and checked on the girl after she had surgery, which relieve some of the swelling, and I also found she had other injuries,” Griego said. “She had bruising on her mouth and on her chest, but that could have happened when they were giving her CPR.

“She also had spank marks that covered her entire butt that, in my opinion, looked like strap impressions,” he said. “She also had several bruises on her arms and legs and underneath her feet.”

“He walked out of the bathroom to discover his girlfriend’s daughter laying on the floor, crying,” the complaint said. “He said he approached her and she stopped breathing. He picked her up and shook her to get a response.”

The criminal complaint further states Maldonado began to perform CPR on the child until medical help arrived. It also says Maldonado told Griego he believes the girl had fallen from the sofa and hit the floor.

Griego said he had received consent from Maldonado to search his residence in order for the detective to investigate the scene where the child was injured.

“I went in the house and I found a lot of drug paraphernalia,” Griego said. “I found some marijuana, but it was less than an ounce.”

After Trujillo and Maldonado turned themselves in to police, they both entered a not guilty plea to the charges during an arraignment hearing Friday morning. Magistrate Court Judge Danny Hawkes ordered the two be held on a $100,000 cash or assurity bond at the Cornell Detention Center in Los Lunas. 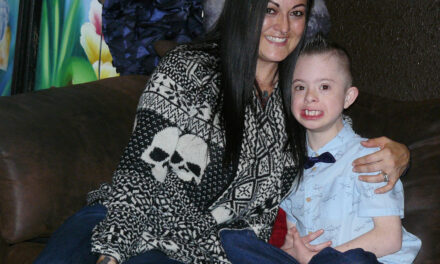