With district play getting underway last week, the number of games across the county has dropped, but the stakes have never been higher. Here’s a look at the scores from last week’s games and a look into what’s to come for the prep teams of Valencia County.

Los Lunas enjoyed a 2-0 week to improve to 8-4 on the year, beating West Mesa 5-0 on Tuesday and then Belen 3-0 in the district opener on Thursday.

This week, the Tigers opened the home half of the district schedule on Tuesday against St. Pius X, and return to action this afternoon at 3:30 p.m. against Grants.

The Pirates are 10-2 on the year and 1-1 in district and are coming off a win over Valencia on Tuesday.

The Jaguars, meanwhile, went 1-1 last week in a pair of district games, beating Belen 2-1 on Tuesday before falling to St. Pius X on the road on Thursday, 8-0.

VHS lost its matchup with Grants on Tuesday and is off for the rest of the week before heading into a rivalry match with Los Lunas next Tuesday.

A full recap of the Valencia game is available on the News-Bulletin website. The team was off on Tuesday, and will return to action tonight at St. Pius.

At the time of publication, the Sartans were ranked second in Class 4A and the top team in the district, two spots ahead of Los Lunas, the next highest ranked team.

Valencia was unable to rebound from their 3-2 loss to Belen last Tuesday and fell to St. Pius on Thursday 7-0. The Jaguars took on Grants on Tuesday but no results were available before the News-Bulletin deadline.

Los Lunas beat Belen last Thursday by a score of 8-0 before knocking off Santa Teresa in a Saturday contest 3-1. LLHS took on St. Pius Tuesday, and will play Grants today.

Belen returns to action after an off day Tuesday against St. Pius tonight at 4 p.m.

Belen returned to the hardwood after a ten day break with a pair of road matches.

The district schedule for BHS opened on Tuesday with a match against Valencia and a seperate recap is available.

Next up, the Eagles will take on Los Lunas tonight at 6 p.m. at LLHS.

Los Lunas also suffered a pair of losses last week, falling 3-1 to Eldorado and 3-2 to Santa Teresa, dropping the Tigers to 4-7 on the season. LLHS plays its only game of the week against BHS tonight at 6 p.m.

Valencia finally snapped its seven-game losing streak with a 3-2 win over Atrisco Heritage Academy last Tuesday. Prior to the match, the Jaguars hadn’t come out on top, or even won a set since a 3-2 win over Hot Springs on Sept. 7. Read about the Jaguars matchup with Belen on the first page of the sports section.

Los Lunas and Belen both competed at the Rob Winter Classic in Las Cruces last weekend, with the Tigers finishing fourth and the Eagles 15th.

The Los Lunas runners ran an average time of 17:27 but with a score of 132 they were 40 points behind third-place El Paso Coronado.

The Eagles top runner was Santos Sisneros who finished 40th with a time of 17:48.67.

Neither school fielded a scoring team on the girls side, but LLHS did have a number of participants, headlined by Amanda Sparks who finished seventh with a time of 20:45.68. 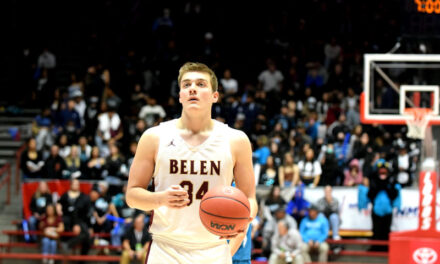 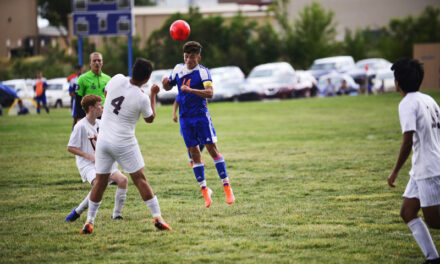