Depth makes Tigers better than ever

Los Lunas High School cross-country coach Larry Padilla has quietly built, over the last decade, one of the most successful athletic programs at the school, save for wrestling. And the best is yet to come.

Padilla said, this year, he may have the best overall team he’s had in his 12 years as head coach.

“We’ve never had the depth that we have this year,” he said. “So, I think that’s an accurate statement.”

The Lady Tigers, who have won the District 3-5A title two years in a row and finished fifth at state a year ago, lost their best runner over the past five years, Tracy Ulibarri, to graduation. But the rest of the team returns with a nice addition, junior Danielle Torres.

“I had fun in track last year, and I learned to like to run,” she said. Torres and top-returnees Monica Padilla, a sophomore, and Maria Liot, a junior, form a solid core.

“We’ve been depending on Tracy for the past five years,” the coach said. “Tracy’s gone now, but Monica is running every bit as strong as she ever has, Maria is right up there and Danielle has been running up there with the two of them in practice. So we have three really strong runners.”

Padilla said any one of the girls in this deep group could score in the four and five spots for the Lady Tigers. Among them are senior Aria Cook, junior Gina Cherne, sophomores Heather Salas and Cassie and Katie Sanchez or freshmen Jamie Benavidez or Becky Woodruff.

Together, this could be the best year yet for the Lady Tigers.

“I really think we can break into the top three this year, as long as we have Monica, Maria and Danielle running up there and the strength of the rest of the team,” Padilla said. “I think we’ll be able to compete with anybody this year.”

And though the Tiger boys return only one regular varsity runner, they may be as strong as last year’s team, which finished second to Alamogordo at the district meet but placed ahead of their district rivals at state.

“We got sixth at state last year and the year before that we got ninth, so we’re improving every year,” said Aaron Padilla, the coach’s son, who is the only boy with a full year of varsity experience. “And I can’t see why we can’t again this year. I don’t know if we’re quite as strong as last year, but we have a lot of good, young talent.”

Among the youngest and swiftest is freshman Adam Arguello and sophomore Matt Cash, both of whom ran with the varsity some of the time last year. The youngsters, along with seniors Padilla and Matt Mondragon, are a solid group to start with.

After that, the Tigers’ depth kicks in. Rounding out those vying for seven varsity spots are juniors Tim Casey, Aaron Greenwood and Adrian Walker, sophomores Jonathan Parra and Nathan Romero and freshman Bobby Herendeen.

“So, even though Aaron is the only returning varsity runner who ran at all the varsity meets, we have the depth and talent with these other kids who I think we’ll be every bit as strong as last year,” the coach said.

While Padilla has been named district coach of the year two years in a row and has built the program into one of the best in the state, a lot of the credit should go to assistant coach Nancy Adams, he said.

“She’s been our top recruiter,” Padilla said. “She coaches track at Manzano Vista, and she’s able to spot the distance runners. A lot of the talent and the depth we have is a result of what Ms. Adams has done.”

The Tigers open the season next Saturday at the Alamogordo Invite. Coach Padilla said it would be a good opportunity to see where the Tigers rank against district competition, as most of the District 3-5A schools will be there. 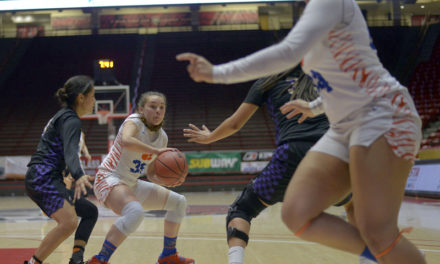