BELEN — A 7-year-old Belen girl was severely injured last Thursday when two Rottweilers attacked her and her grandmother.

Christine Valdez said her granddaughter, Ashley Diaz, is currently in the special care unit at UNM’s Children Hospital in Albuquerque, and has already undergone two surgeries. The road to recovery will be a long one, but Valdez said Ashley is doing as well as can be expected. 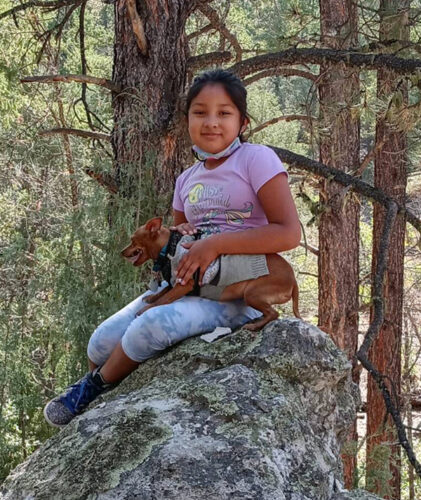 Submitted photo
Ashley Diaz, 7, of Belen, is currently recovering from injuries she sustained during a dog attack on Thursday, Feb. 18. Her grandmother, Christine Valdez, said the girl has undergone two surgeries.

Belen Police Chief James Harris said the incident occurred just after 3 p.m., Thursday, Feb. 18, near an apartment complex on Aragon Road. He said the girl and a friend were outside playing when they fell into a neighboring property and she was attacked by the two dogs.

“The little girl was being mauled pretty severely and pretty viciously,” Harris said. “She was playing with a friend, and the friend ran back to get help.”

Valdez said Ashley, a second-grader at H.T. Jaramillo Elementary School, had finished her online schooling for the day when she asked if she and her friend, Christopher, could go outside to play. It was only 10 or 15 minutes later that Valdez realized something was wrong.

“I heard Christopher’s dad running down the stairs,” Valdez said. “I ran outside because I knew Ashley was out there.”

Valdez said Ashley and Christopher had been playing on the cinder block fence separating the apartment complex and a property to the north. She’s not exactly sure what happened, but believes the two children fell off the fence and landed in the property where the two dogs were.

“He started running but the dogs already had Ashley. He tried to throw rocks at them,” Valdez said. “Christopher was able to jump back over the fence and started banging on everyone’s doors to get help. He was finally able to get to his dad.”

When Valdez got to the property, she didn’t realize it was her granddaughter who was being mauled by the dogs until she was able to grab her. All she could hear was a child screaming for help.

Valdez immediately jumped over the fence and didn’t realize it was Ashley until she had her in her arms.

“I grabbed her and the other dog bit me in the left arm,” Valdez said. “I was hitting him and trying to hit and kick the other dog to save her. When I finally got her close to me, the dog was pulling on her. It was like they didn’t want me to get to her.”

When Valdez finally had a good grip on Ashley’s arm, she was trying to make her way to the fence. It was then that much needed help arrived.

“One of the neighbors, Simona Lopez, comes out with a firearm and tries to scare the dogs away by firing a couple of shots into the ground,” Harris said. “One of the dogs runs off; the other dog continues to attack the little girl and drag her around the yard. Simona then shot and killed the dog, saving the little girl’s life.”

Valdez said after Lopez shot the dog, neighbors were able to get both her and Ashley to the other side of the fence.

Ashley’s injuries were so severe that doctors performed a 5 1/2 hour surgery on her Thursday night. One of the dogs ripped Ashley’s left ear in half, and tore about six inches of skin back behind her ear.

Valdez said doctors were able to reattach the ear and skin.

“She has a lot of staples and bite wounds on her head,” Valdez said. “Her injuries are mostly on her neck and head, but she has puncture wounds on her legs, on her back and on her side.”

A second surgery was performed on Monday, Valdez said, to place drainage tubes on the right side of her head. Ashley is also going through a series of rabies shots.

“She’s going to be here for awhile,” Valdez said of Ashley’s recovery in the hospital. “She’s doing OK. She’s in stable condition.

“She is traumatized. She cries sometimes, but when she’s awake, she’s talking. She will wake up sometimes crying.”

When being interviewed by the News-Bulletin Monday afternoon, Valdez said a psychiatrist was talking with Ashley because of the trauma she went through. Although she doesn’t remember the entire incident, Ashley’s grandmother said the girl does remember some of it.

As for Valdez, her injuries weren’t as severe. She has one puncture wound on her arm that needed a couple of stitches, but she has some scrapes and bruises.

Harris said a neighbor was able to get police in touch with the dog’s owner, who was out of town.

“(He) did sound concerned and asked about the condition of the little girl numerous times,” the report said. “(He) also advised he would be in contact with whoever was necessary … when he returned home.”

Sgt. Guy Sullenger wrote in his report he didn’t find that any crime was committed, and it was unclear how the little girl ended up in (the neighbor’s) property.

“A dispatch note indicated that she fell inside (the property),” the report stated. “The dogs were not roaming free out of the property lines. With the girl’s life and health being clearly threatened, the actions of Simona Lopez were completely justified.”

Since entering the hospital, Valdez, who has custody of her granddaughter, hasn’t left Ashley’s side. She not sure when Ashley will be able to go home, but is grateful to all the people who have helped her, including the teams of doctors and the nurses who have cared for her, and the woman who saved them from the dogs.

“If it wasn’t for her, we would have been in a lot of trouble,” Valdez said of Lopez. “She saved us. If not for her, we wouldn’t have been able to make it to the fence. I don’t know her personally, but I thank God she was there and heard the commotion because these dogs weren’t going to stop.”

Harris said the second dog involved in the attack is in quarantine at the Valencia County Animal Shelter.