When Joan Dodson of Bosque Farms wanted to build an apartment behind her house for her mother, she called Allen Russell of Dukall Construction.

Russell, who mainly builds custom homes, but takes on remodeling and reconstruction projects a few times a year, said this project has been a challenge but is also rewarding. One of the main reasons he said he took the job was because the owner knew what she wanted and had a budget for it.

“I usually don’t do a lot of outside work from my own building, but Joan knew what she wanted, which helped me know what needed to be done,” Russell said.

When Russell first bid for the job, he asked Dodson if she knew anyone who would be willing to help him. “I just needed someone to hold the end of the board and low and behold, she volunteered,” Russell said.

The two started on the project in late January and expect to finish by early March. The goal is to get it done by March 9 – Dodson’s mother’s birthday.

“For one thing, we took into consideration that, although she’s not wheel-chair bound now, she might be later,” Russell said. “We made the door extra wide with an open floor plan.”

Russell and Dodson have also made other allocations in the house, including spacious closets and ample room in the bathroom. He said he’s proud of what they have accomplished so far because, when they first started, they had to start with a simple garage.

“It was questionable whether it would be easy to tear it down or not and start over,” he said. “We were able to salvage the walls and we salvaged a ton of lumber out of this thing.”

Dodson said although the work is hard, she enjoys working with Russell. “He’s very easy to work with, and he’s very efficient,” Dodson said. “He works hard, and he works fast. He also comes up with the funniest things, and I have really enjoyed working with him.”

Russell has been in the construction business for most of his life and says Dodson’s help is immeasurable. “She’s way beyond my expectations. She puts the young men to shame, and we work hard, and we put in a day’s work,” Russell said.

Because Russell and Dodson have shopped almost exclusively locally, they have been fortunate to find deals on a lot of materials needed for the project. Russell said he likes shopping locally because it not only helps the local economy, but they help him in return.

Russell has been working in the construction industry since he was 10-years-old and says he’s never stopped loving it. “I can’t wait for the sun to come up in the morning so I can get to work,” Russell said. “I like doing this kind of stuff. It’s a challenge.”

Although Russell only commits to a few remodeling jobs a year, he said once he signs on, he dedicates himself to the project. He said because more people in Valencia County want to remodel or do smaller home repairs, his phone rings off the hook.

“I’m a little selective in the jobs that I do,” he said. “But when I get a customer like Joan, it’s very hard to turn down.”

For more information on Dukall Construction, call Allen Russell at 866-7180 before 8 a.m.

Welfare to Work center offers help and a fresh start 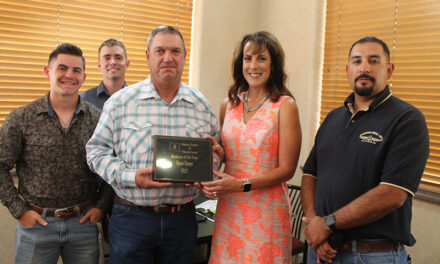