The Gladiators were supposed to make their debut in the Indoor Football League in March, but will have to wait another year after having the season, which was scheduled to run through the end of June, cancelled due to the COVID-19 pandemic.

In light of the cancellation, the organization pledged to make supporting the community the forefront of the franchise.

“Our players our excited to get back on the field and continue to train while adhering to state guidelines,” owner Gina Prieskorn-Thomas said in a release. “But for now, our commitment to community is at the forefront. Our players and staff will continue to help with food drives, host recess time and support our community during this global pandemic. Our Gladiators family takes great pride and honor in helping our community.”

One of the ways the organization is making good on that commitment is through delivery of meals to first responders around the Albuquerque metro area, which brought them to Los Lunas.

The meals, which were from Burrito Express in Albuquerque, were provided by the restaurant as well as the Albuquerque Hispano Chamber of Commerce. Members of the Gladiators front office, the team and Representative Kelly Fajardo of district seven were on hand to distribute the meals to the first responders who showed up to take advantage of the offer.

In response to social distancing guidelines and in order to take proper precautions, most of the organizers were wearing masks and gloves. The event was set up so officers wouldn’t have to get out of their cars in order to get their lunch if they didn’t want to.

The players also hosted their daily “Recess with the Gladiators,” a quick, five minute video where they demonstrate exercises and stretches which can be done at home and is streamed live on the Duke City Gladiators Facebook page every day.

First responders from the Valencia County Sheriff’s Office, Los Lunas Police Department and the Peralta Fire Department were among those who received their free meal. 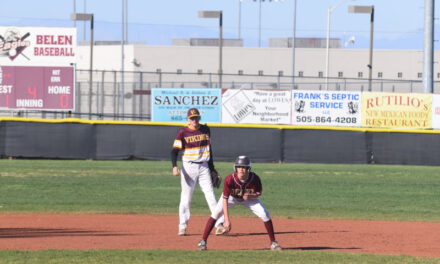 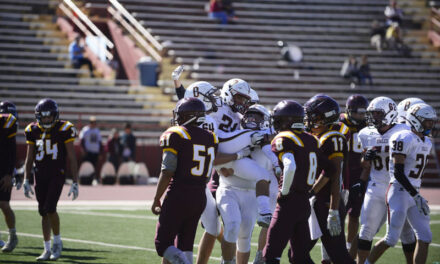 Belen Eagles get back on track; blows out Valley Vikings