Inclement weather delayed the start of the 2002 high school track and field season for the Belen Eagles. But when they finally did get started, the Eagles got a good jump out off the blocks.

Both Belen head coaches, Lady Eagle first-year coach Jim Edwards and boys veteran coach Kevin Benavidez, were pleased with what they saw from their athletes.

“I was very happy with it,” said Edwards. “To me, it was a practice meet to find out where we’re at and what we have to do to get better. I was real pleased with the performances.”

Especially the performances of junior Jessica Braswell and sophomore Jocelyn Chavez, who both bettered state qualifying marks — Braswell in the pole vault and Chavez in the high jump — at Albuquerque’s Milne Stadium.

Braswell cleared 8-feet-8-inches in the pole vault, two inches better than she did at last year’s state meet, placing second.

Chavez won the high jump with a leap of 5-feet-1-inch. Edwards said she might have gone higher, but the event was stopped after Chavez was determined the winner.

Another top performer for the Lady Eagles was sophomore Emily Schultz, who won the 100 meter high hurdles and placed third in the 300 hurdles.

The Lady Eagles continue the season when they travel to Grants for a meet on Saturday. For the most part, they are a young team with just three seniors — Katherine Archuleta, Maldonado and Melisha Romero.

Maldonado is one of the Lady Eagles’ top athletes. She specializes in the 400 but also excels in the long jump and triple jump.

Sophomore sprinter Melissa Gurule is coming on strong, Edwards said. Another sophomore to watch is Alicia Taylor in the pole vault. “She’s really doing great. “She did 7-6 (six inches short of the state qualifying height), so she’s on her way there.”

The Lady Eagles have a lot of young talent, and there may be more on the way soon.

“I’m looking to bring up some eighth-graders because there is some nice talent down there,” Edwards said. “But I want them to have a couple of meets at the eighth-grade level before I bring them up.”

“Basically we sent the younger guys — freshman and sophomores — and let them run, because a lot of the guys we have were just coming off basketball and some from wrestling. We want to wait until they’re ready to run — we don’t want to get them hurt.”

Those who did compete performed well. “We were excited about some of the things those guys did. We had a lot of guys PR (set personal records),” Benavidez said.

Four Belen runners set personal records. Terrell Trantham and Jason Romero both PRed in the 110-meter hurdles. Stefan Marr bettered his personal best by seven seconds in the 800. Nick Carter ran the fastest time of his career in the 100.

Joining Trantham and Romero in running the hurdles is Kyle Merrell, who the coach said has looked good in spring practices.

Belen’s boys will be quick in sprint and relay events once they get everyone ready. “We have a good group of sprinters coming back with Sherwin Price, Derek Jaramillo and Rodney Harrison,” Benavidez said. “I think, along with Nick Carter, those guys will make up two or three of our relays.”

Benavidez said senior David Hull, who ran relay legs last year and qualified for state in the triple jump, has decided not to participate in track this season. But the coach happily welcomes back senior Jace Rivera, who will be going for his fourth-straight Class 4A title in the shot put his season.

“I think Jace will be able to do it,” Benavidez said. “The question is how far is he going to throw.”

Last year, Rivera won the shot put with a throw of 54-feet-11-and-a-half-inches. He threw the discus 58-feet-11-inches to take second place.

“Right now, Jace is looking really, really good in the disc,” the coach said. “It’s the best I’ve ever seen him throw the disc. I think he really wants to get a state championship in that one too.”

Rivera sat out Monday’s meet but is slated to make his debut Saturday when the Eagles’ boys team participates in the Los Lunas Invitational. 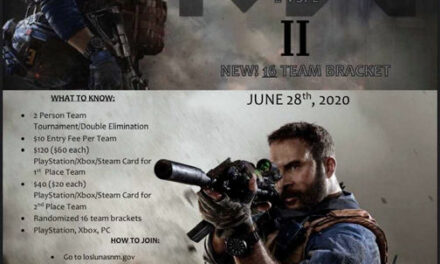