“We ran some pretty good times this week — some of the better times we’ve run all year,” said head coach Kevin Benavidez. “Everyone just keeps getting better.”

The same can be said for the Lady Eagles, who are getting stronger under Phase II of coach Jim Edwards training schedule. Times are dropping and will drop more as Phase III — speed training — is introduced.

“With my program, we’re working on strength for another two weeks before we work on speed,” Edwards said. “We’re starting to put the speed in, but it’s not there yet.”

The Lady Eagles placed 10th in a strong field of 12 teams at the Las Cruces Invitational on Saturday. The highlight for Belen was Jocelyn Chavez qualifying for May’s Class 4A state meet in the triple jump. That makes two events the sophomore will participate in at state, after previously qualifying in the high jump.

Chavez won both events, clearing 5-feet, 1-inch in the high jump and traveling 34-feet, 10.5-inches in the triple jump.

“Last week at Hobbs she went 32-11, so she improved two feet in a week. She’s getting stronger,” Edwards said.

Another state qualifier, junior Jessica Braswell, reached 9-feet for the first time in the pole vault and placed fifth. Sophomore Alicia Taylor didn’t fare so well this week but did qualify for state a week ago in Hobbs by ascending 8-feet, 2-inches.

“The girls are starting to get the hang of it,” the coach said. “The technique work that we’re doing is really helping a lot.”

Also placing in the points for the Lady Eagles was senior Monica Maldonado, who was sixth in the 100-meter dash. Edwards said the Lady Eagles’ top sprinter is “coming along” as she recovers from a back injury. Maldonado won’t do jumping events this year, Edwards said, but will stick strictly to running events.

Edwards said he was also impressed with freshmen Alia Driscoll and Janelle Beyerl. Beyerl is making good progress as an upcoming sprinter and long jumper. Driscoll placed just out of the points in seventh place in the 3200-meter run, shaving 90 seconds off her best time.

Another to slice a big chuck of time off her previous best was junior Caryn Jarvis, who ran the 800 20 seconds faster than she did a week earlier.

Almost all of Belen’s boys are improving their times as well.

“Some of our young guys are doing really well,” Benavidez said. “They’re getting better and better.”

Both teams are made up of Nick Carter, Rodney Harrison, Sherwin Price and Derick Jaramillo. They finished second in the 400 relay in 44.27 seconds and third in the 800 relay in 1:34.56.

“I was real impressed with Derick Jaramillo,” Benavidez said of his relay anchor man. “He not only ran the relays, he took first in the triple jump, and he took second in the 200 open.”

Price also helped the Eagles off the track by taking third place in the high jump.

Senior Jace Rivera won both the shot put and discus events. The three-time Class 4A champion in the shot put won the event by more than 12 feet with a throw of 52-feet, 9-inches. He had his best mark of the year in winning the discus with a toss of 162-1.

Also placing in the points for the Eagles were fourth-place finishers Jesse Trjuillo in the javelin, Terrell Trantham in the 110-meter hurdles and Kyle Merrell in the 300 hurdles. Nick Carter was fifth in the 100-meter dash.

Coach Benavidez said the entire team has shown improvement through the first few weeks of the season, and things are looking good for the future.

“If we keep working hard in the next few weeks, all these guys will be right where they need to be — that’s everybody, not just one or two of them,” he said.

Edwards said his girls team is also on pace. “Since we have eight weeks until state, we still have time to get faster,” he said.

Next up for the BHS track and field teams is a meet in Socorro Thursday morning. The meet gets underway at 9 a.m.

The Eagle track and field teams will take some time off for spring break. The boys will resume competition Saturday, April 6, at an Albuquerque Public Schools meet.

Some Eagle athletes can expect invitations to the Marilyn Sepulveda Invitational on Monday, April 8. 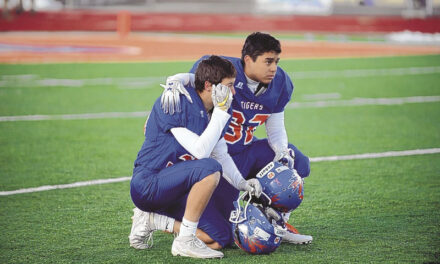