Some heard and felt it, while others didn’t, but it happened — an earthquake on Friday afternoon.

The location of the earthquake, according to the U.S. Geological Survey, was seven miles southwest of Belen on Via Feliz, west of Twining Lane on the west mesa.

Litherland, who obtained a Ph.D. in geophysics in June 2018 from Stanford University, and a B.S. in Earth science with a concentration in geophysics in May 2009 from Rice University, said New Mexico is classified as a moderate seismic state, meaning we do experience some earthquakes here.

“In some places, there is no chance of an earthquake because there is no fault. New Mexico’s chances of having a damaging earthquake in our lifetime is low but it is a possibility,” Litherland said. “We do get several of these earthquakes that you experienced every year. People are able to feel them, but they don’t typically cause much damage.”

Litherland said earthquakes in Socorro are more common because it sits upon the Socorro Magma Body, which is a pancake-shaped mass of molten rock situated about 12 miles below Socorro.

“It’s the most naturally seismically active part of the state,” she said. “There are some parts of the state that experience earthquakes but from human activity.”

While Valencia County isn’t affected by the Socorro magma body, the Earth can be moved by the Rio Grande rift. Litherland said the river’s course through southern Colorado and New Mexico is controlled by a geologic feature known as the Rio Grande rift, which formed when Earth’s crust stretched and thinned in an east-west direction starting about 36 million years ago.

“Due to tectonic forces, the rift is being pulled apart very slowly — probably a few millimeters a year,” Litherland said. 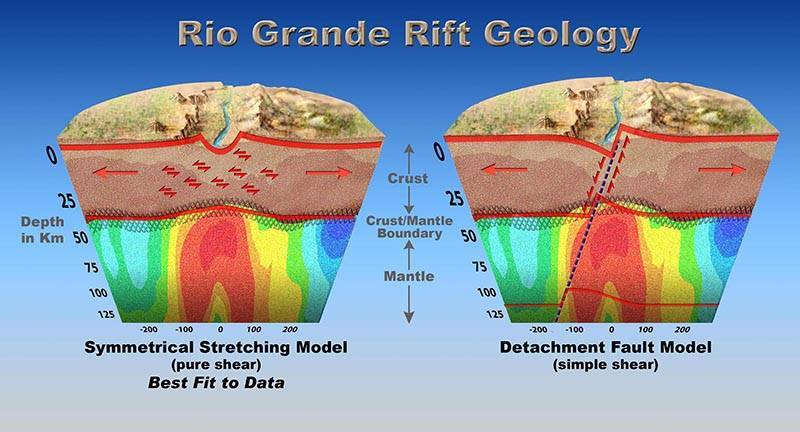 Source: National Science Foundation
Dr. Mairi Litherland said most researchers think there’s not actually a single, large fault, but rather many smaller faults, so the image on the left is the better representation of the current scientific understanding.

While some people reported hearing and feeling something on Friday, Litherland said it’s common for others not to feel a thing when it comes to earthquakes this size.

Valencia County Sheriff Denise Vigil and her husband, Mike, were at their home, south of Belen, Friday afternoon, and while she didn’t hear or feel anything, he did.

“I didn’t feel a darn thing,” Vigil said of the earthquake. “Mike did, but because we live so close to the trains, that’s what he thought it was. He was outside, but he didn’t think it was unusual.”

Vigil said it wasn’t until the News-Bulletin contacted her Friday that she suspected anything had happened.

When the News-Bulletin reported on its social media pages that an earthquake, in fact, happened, people — from Tomé to Veguita — realized what they felt and heard was real.

Before it was confirmed as an earthquake, some speculated it was an explosion of the natural gas pipeline in Jarales, nearby trains coupling or that something had crashed in or near their homes.

“I heard it in Belen! A big boom like someone had dropped; something heavy that shook the wall,” a man named Billy Ray wrote on the paper’s Facebook page. “Very strange. Not at all like the earthquakes I experienced in California.”

“Wow. Our dog, Sparky, was aware and barked, and David thought he heard something,” a woman named Connie Garcia, who lives in Jarales, wrote. “I looked out toward the pipelines but saw nothing.”

Sharon Griego Gonzales reported, “We heard it in Veguita, husband went outside to see what was going on.”

Miche Tellez, of Belen, said, “I thought someone drove into the side of my house.”

“That’s what it was; I thought a airplane crashed here in Veguita,” wrote Kathy Sandoval.

Summer Ludwig, the children’s librarian at the Belen Public Library wrote, “We felt it at the library in Belen. I thought it felt more like an explosion so I’m glad to know it wasn’t.”

While Vigil said she hadn’t received any reports of damage to anyone’s property, Margaret Quezada said, “My house shook in Casa Colorada; busted pressure gage on water tank, now water every where.”

While folks in Socorro experienced a smaller earthquake — recorded at 2.6 magnitude — just a few weeks ago, Litherland said the last time a sizable quake shook the Belen area was in 2012.

According to an News-Bulletin article in October 2012, a 2.8 magnitude earthquake was measured northwest of Belen. Other earthquakes occurred in September 2009 (2.3 magnitude) and in May 2004 (2.9 magnitude).

Larger earthquakes typically occurring in places such as California will last for several minutes and will cause damage, but earthquakes of the size that happened here Friday will only happen for a second or two.

“Earthquakes are happening all the time, especially along the Rio Grande rift, but most are so small that you can’t feel them,” Litherland said. “We see a couple of earthquakes this size a couple of times a year in different parts of the state.”

Litherland said residents shouldn’t worry about experiencing a large earthquake that would cause damage in the foreseeable future.

“We do have a small potential in New Mexico to see a larger earthquake that can cause damage. People have studied the geology of the area thousands of years in the past, and there have been some relatively large earthquakes in the past,” she said. “But they happen very infrequently, and there’s no way to predict when an earthquake of that size might happen.” 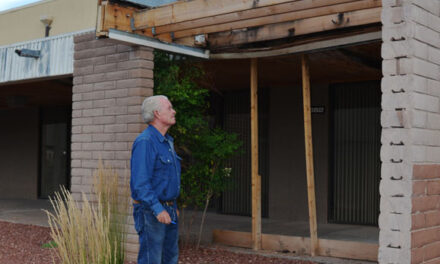 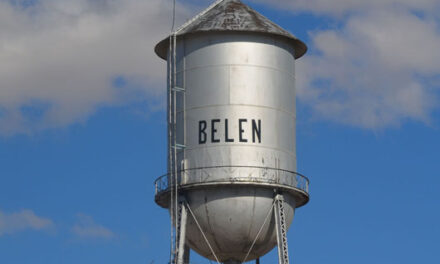