Egging on the White House

A Bosque Farms couple are reliving their brush with greatness after returning home from an unforgettable trip to Washington, D.C.

“It was so exciting. We had no idea it would happen,” Annette says, with a smile. “We were tickled to hear the news.”

Stan was chosen as one of 51 artists to represent their states at the Easter Egg display on March 25. The New Mexico artist chose a church theme to portray the Land of Enchantment. In pen, ink and acrylic paint, the drawing depicted the destination of the Good Friday Pilgrimage to Chimayo.

The Franklins, who have lived in Bosque Farms for more than 20 years, say they love the area for its rural, peaceful atmosphere.

Stan’s interest in art thrived during his spare time while working at St. Joseph’s Healthcare in Albuquerque. After entering paintings in the state fair, the artist was awarded first place in the amateur show at the fine arts gallery. He also won a popular award, chosen by the people for his favorite painting, “Innocent Boy,” of his son playing in a pile of ants.

He first began drawing on eggs when his daughter was a little girl and raised chickens. Right away, Stan used his surroundings as topics for his pictures. He experimented by bringing to life western landscapes, windmills, yuccas and roadrunners on both small and larger-sized eggs of chickens, ducks and geese.

“I picked it up as a hobby, and it grew. First, I gave the eggs away as gifts … ornaments, presents for friends, family, teachers and principals.”

As attention to his work grew, Stan began displaying the eggs in nearby galleries. He later went on a tour of northern New Mexico, where he took pictures of different churches. The pictures immediately inspired the artist to create a special line of church drawings on eggs. The one depicting Chimayo turned out to be extremely popular.

“The eggs are a nice, creative outlet,” says Stan, who now works at the Heart Hospital of New Mexico. “They take three-and-a-half to four hours to make. I want to be sure people can appreciate the picture up close. I pride myself in the detail.”

Stan’s brother-in-law in Aztec first noticed an article about the national egg contest and clipped the details out for the Bosque Farms painter. Artists from every state in the U.S. were invited to submit paper drawings of their eggs to represent individual states.

The Franklins got the call in January. It was good news; Stan’s egg was chosen to represent all of New Mexico and be on display at the White House for up to four weeks before Easter.

“It was hard to believe,” Stan recalls. “You’re being invited to the White House by the First Lady to show your egg. That is the ultimate. What could be a greater honor?”

A total of 51 chicken eggs were exhibited in alphabetical order to represent the U.S. and the District of Columbia. Stan’s uniquely-designed egg stood out next to the other crafty, colorful ones decorated with beads and adorned with jewels. “Mine was hand-painted, along with a few others,” he said.

Before embarking on their journey to Washington, Stan decided to hand-carry the second egg in the set depicting Chimayo to the White House.

He had created five different styles and asked his friends, family and co-workers to vote on the final choice. Unfortunately, for security reasons, Secret Service agents did not let him bring the additional egg inside. “I ended up leaving a note with the egg for the First Lady.”

Although tours of the White House stopped following the terrorist attacks of Sept. 11, the Bosque Farms couple was greeted with a warm welcome.

Meeting Laura Bush was an unexpected gift. It was a complete surprise because the Franklins were under the impression that the First Lady and President Bush were traveling in Peru.

After greeting her, the couple told Mrs. Bush they were from Bosque Farms, 20 miles south of Albuquerque.

The President and his wife stopped in Bosque Farms in October of 2000 when Bush was campaigning for the presidency.

“She mentioned that she had visited the school. It was neat she remembered Bosque Farms after all her travels. She was very gracious,” Annette said.

“It was beautiful. The whole thing was very special because we were able to take pictures and videotape the tour,” Annette says. “She was wonderful. We didn’t expect for her to take a photo with us.”

Among the beautiful, historic relics of the past, Stan and Annette found themselves transported back in time by the antique furniture, classic paintings and treasured books.

“It was full of history … paintings you’ve seen in books,” Stan says. “Every American should be able to go and see our heritage — to feel pride to see it all.”

Behind the roped-off areas of the White House, the couple took a break in the Red Room, where they sat down on the luxurious sofa.

“This was a real place where real people lived. Every president has lived there except one, Washington,” Stan said.

The Franklins explored not just the White House but many of the historic buildings surrounding it, such as the Capitol, and the Lincoln and Vietnam memorials.

“It was amazing to see all of the names on the Vietnam Memorial. We got to make an etching of the name of Daniel Fernandez,” Annette says.

The trip also inspired Stan, as an artist, to further his creative talents.

“We got to see so many fabulous things. To be in a gallery like the Smithsonian, it makes me want to work harder and do more to further my talent. It’s very inspiring in so many different ways. Hopefully, when I retire, I can get more involved with painting again.”

Now when the Bosque Farms couple watch the news, they feel great pride when they see the White House or the Capitol in the background.

“We realize how much it means to us. Even though things are restricted, it is so full of patriotism. We have a new appreciation for the U.S. and being an American,” Stan says with pride.

The Land of Enchantment will forever leave a lasting impression on the White House and all those who enter its great doors. Stan Franklin’s painted egg of Chimayo will stay in the Bushes’ personal library for visitors and family members to behold. “It’s a part of history now. His kids will be able to see it and, perhaps one day, their great-grandkids,” Annette said. 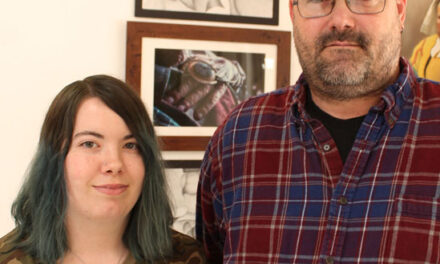 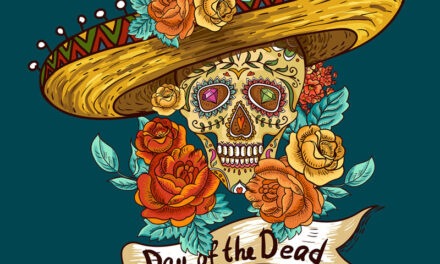