Mr. and Mrs. Herbert Ellermeyer recently celebrated their 50th wedding anniversary. Herb and the former Claire Marie Gaeto were married on May 17, 1950, in Albuquerque.

Herb was born and raised in Belen. He served as a naval officer during World War II, graduated from the University of New Mexico and became an engineer for Creole Oil Co. in Venezuela. He returned to Belen and became owner of Feil and Ellermeyer Department Store.

Claire was born in Cleveland, Ohio, and received her degree from Cleveland State University. She came to New Mexico and was employed as a teacher and librarian for 25 years at Belen High School.

In Belen, they were very active in many civic and community affairs. They were charter members of Tierra del Sol Country Club, where they enjoyed playing golf. After retirement, they enjoyed traveling throughout the U.S., Europe, the Orient, Mexico and Canada.

To celebrate their anniversary, the Ellermeyers took a cruise to the Bahamas. They were accompanied by their children and grandchildren, Dr. Bill Ellermeyer and his wife, Jeanne, and their children, Rory and Will, of Southlake, Texas, and Lynn and her husband, Dr. John Matte, and children, Amy, Katie and Matthew, of Albuquerque.

Recently, after living in Belen for 52 years, the Ellermeyers moved to Albuquerque.

A dinner for family and friends will be held this summer.

Lann and Farrell will marry Aug. 3 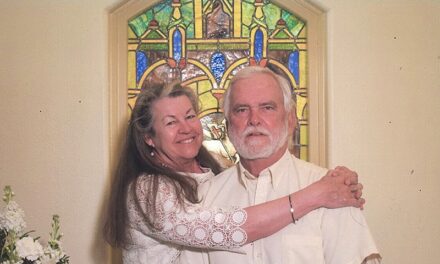