While Yucca Little League was enjoying its first District 5 championship in history (see story above left), winning the district title is already old hat for the core of the Enchantment Little League senior division all-star team.

Eight members of the team were members of Enchantment teams that won district and state titles the past two years as juniors and majors.

Ho hum. They won another one Thursday, beating Mile High, 5-3, at the Zia Little League diamonds in Albuquerque.

“We always take district, so it was just another game. There really wasn’t any pressure,” said Ashley Trujillo, who was the winning pitcher and drove in the go-ahead run in the fifth inning.

Enchantment needed only to win one of two possible games to win the district title and wasted little time in gaining the edge. Ashley Figg led off the game with a walk and was moved into scoring position on a sacrifice bunt by Maria Sedillo. Monique Chavez followed with an RBI single and eventually worked her way around to third base. Trujillo scored Figg with a sacrifice fly to deep center field to give Enchantment a 2-0 lead.

Mile High came back to tie the game in the third inning and went ahead, 3-2, with an unearned run in the fourth. But Enchantment took the lead for good with three runs in the fifth.

Victoria Baca led off the inning with a pinch-hit single. One out later, Sedillo walked and Chavez hit a hard shot the Mile High shortstop couldn’t handle. The bases were full for Trujillo who slugged a line-drive into center field, scoring two runs.

“I felt a lot better after that,” said Trujillo, who was visibly irritated after Mile High came back to take the lead.

Later in the inning, Danielle Baca drew a walk with the bases loaded to push across enchantment’s final run.

Trujillo worked three scoreless innings, sending Mile High down in order with two strikeouts in the seventh, to seal the win.

“Again, we had strong pitching,” said manager Lisa Chavez, whose team allowed seven runs and scored 19 runs in three games in the tournament. “I still don’t think we’re hitting the ball the way we’re capable. Today, we were able to get hits at the right time and move the runners.”

Though many of the Enchantment players are young enough to be eligible to have played for the junior division all-star team, they proved they are good enough to play at a higher level. Coach Chavez said their experience will help them in their quest for yet another state championship.

“The kids are playing well, and they’ve been there before,” she said. “So, based on their experience, they are confident and comfortable in that situation. I expect our kids to be competitive, whoever we play.”

The Enchantment seniors will play their first state tournament game at 10 a.m. Saturday against the District 7 champ from the southwest corner of the state at White Rock, near Los Alamos.

On Wednesday, Enchantment’s junior division team lost a heartbreaker to Mile High, 18-17, in the championship final.

The juniors needed to win one of two games to claim the district title, but lost them both. Mile High won the first game, 15-6, and came from behind to win the final, 18-17. 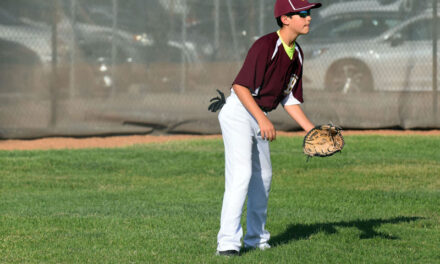 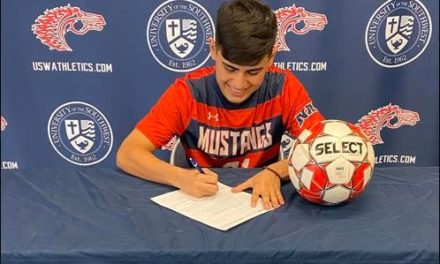