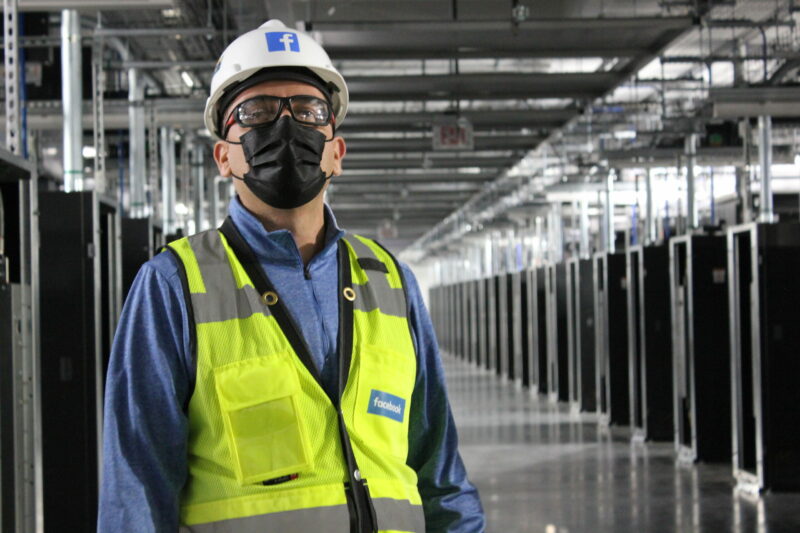 Makayla Grijalva | News-bulletin photo Tony Parea, Los Lunas Data Center manager at Facebook, stands in an unfinished data hall in building six, which is expected to be fully operational by fall 2022. Each of the 30 data halls on the campus houses 3,200 servers each.

Editor’s Note: A previous version of this article incorrectly named Gus Harbaugh as Gus Carbajal. The News-Bulletin regrets this error and the story has been corrected.

The new buildings, connected by an administration area forming an “H” from aerial view, will sit on the southern end of the 750 acre campus. After the addition of the two buildings, the $2 billion data center will sit at 3.8 million square-feet.

“From the beginning, Facebook has and continues to be a valued member of our community,” said Los Lunas Mayor Charles Griego. “It goes without saying that the economic impacts along with the direct and indirect jobs created from this project have been felt throughout the state, but it’s our residents, local businesses, schools, and nonprofits that have largely benefited from having one of the most high-tech and recognized brands in the world be located within the village of Los Lunas. We are beyond excited about their expansion and continued investment in the community.” 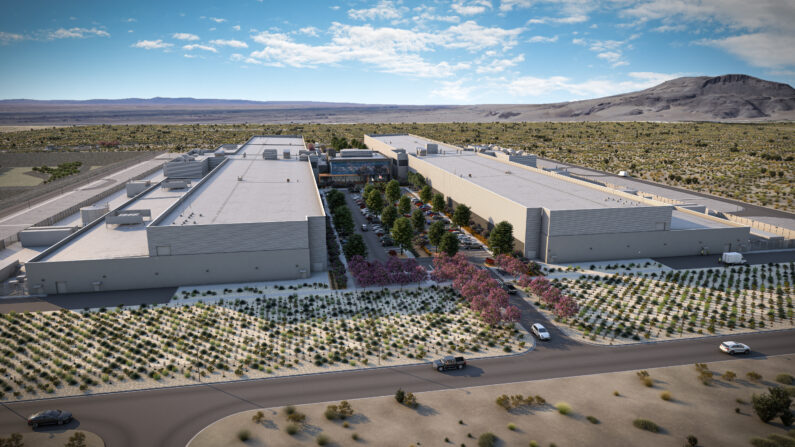 Courtesy of Facebook
Artisic aerial rendering of buildings 7 and 8 at the Facebook Data Center in Los Lunas. Foundation construction of the buildings is expected to commence in January.

Portland-based construction company Fortis, which has contracted with Facebook on the construction of the entire campus since late 2016, has only just begun the ground preparation work for the new buildings.

According to Fortis senior project manager Joe Vlastelicia, the company has already moved 6.2 million cubic yards of earth within the site — an amount he compared to two Pyramids of Giza. Fortis plans to begin building the foundation by January 2022, with the final turnover of the first building scheduled for October 2024.

“The scale is just massive,” said Gus Harbaugh, with Albuquerque-based Franklin’s Earthmoving, adding the repetitive nature of the building and building design creates a more standardized construction, expediting the speed in which the buildings can be erected.

“It has really forced our company to evolve into that next generation of construction,” Harbaugh said.

Franklin’s Earthmoving has worked with Fortis and Facebook on the construction of the Los Lunas Data Center.

As the construction of the two new buildings beginning, Facebook is also starting to move its infrastructure into the two latest buildings, which are expected to be fully turned over to the social media giant by the fall of next year.

The entirety of the Los Lunas campus hosts 30 different data halls, each sitting at 120,000 square-feet and housing 3,200 servers a piece, for 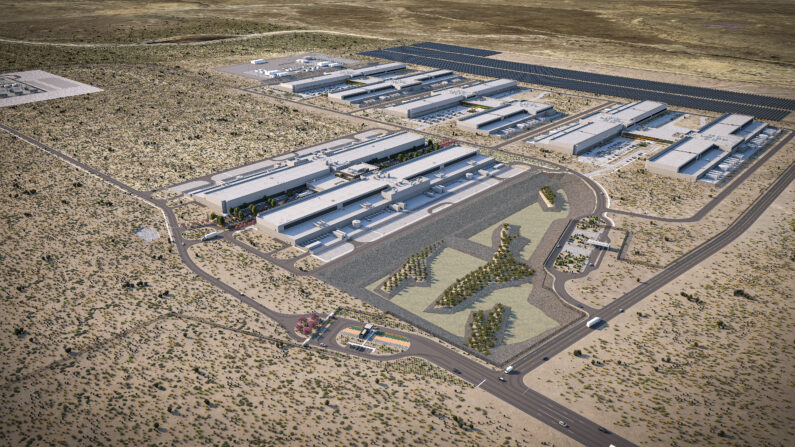 Courtesy of Facebook
Artisic aerial rendering of buildings 7 and 8 in relation to the entire campus at the Facebook Data Center in Los Lunas. Foundation construction of the buildings is expected to commence in January.

The Los Lunas Data Center is one of 18 Facebook data centers worldwide and 14 within the United States.
In addition to announcing the expansion on Wednesday, Facebook officials also proclaimed the company’s goal to restore 200 percent of the center’s water usage back into New Mexico watersheds.

In promotional materials provided to the press Wednesday, Facebook says it uses 80 percent less water than an average data center. According to a June 2021 news report from nbcnews.com, which explored the environmental impact of data centers located in drought-stricken areas, the typical data center uses about 3-5 million gallons of water per day, according to Venkatesh Uddameri, professor and director of the Water Resources Center at Texas Tech University.

Through partnerships with Audubon Southwest, the National Forest Foundation, The Nature Conservancy and Trout Unlimited, Facebook hopes to meet its goal by sponsoring five local water restoration projects. According to a press release, the company funded projects which restored 64 million gallons of water in New Mexico.

Jonathan Hayes, with the National Audubon Society, says the Rio Grande supports about 50 percent of all bird life in the state, making it detrimental to these species when the river runs dry during the winter months.

Utilizing the investment from Facebook, the Audubon Society partnered with local municipalities to lease water to put back into the river, allowing for the birds and other animals along the Rio Grande a better chance at survival. Hayes estimates the society put about 250 acre-feet of water back into the river over the past two years.

“We are thrilled to be expanding our presence in New Mexico. The village of Los Lunas and the state of New Mexico have been great partners from the beginning, and we look forward to a continued strong and fruitful partnership for years to come,” wrote Rachel Peterson, vice president of Infrastructure, Facebook, in a press release. 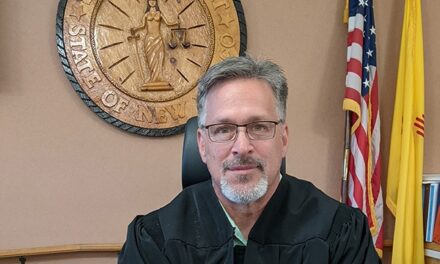 MAGISTRATE TO RETIRE: John “Buddy” Sanchez to leave after 27 years on the bench 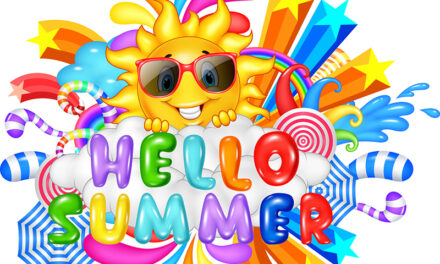