LOS LUNAS — Facebook’s subsidiary Greater Kudu, LLC, filed an application for billions of dollars worth of industrial revenue bonds that could potentially double the size of the Los Lunas Data Center.

In late January the Los Lunas Village Council approved the intent to move forward with the process, and will consider it next month.

What the village is considering is a series of six bonds, totaling $6.6 billion that will help Greater Kudu, LLC expand the Facebook Data Center. Under the proposal, up to six additional buildings can be built out, though two are specifically mentioned as being constructed in the next two years. That number reflects what the company intends to spend on the project in full. 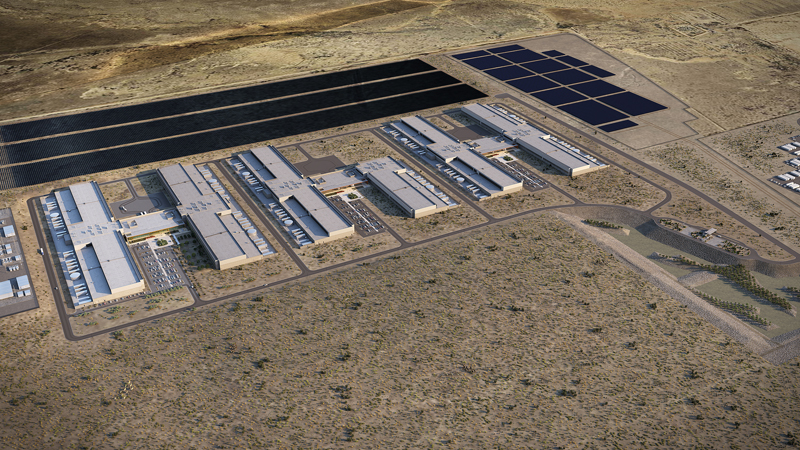 Courtesy of Facebook
A rendering from Facebook as to what the first six buildings at the data center in Los Lunas will look like when completed. Currently, building five and six are under construction and Facebook plans to add even more buildings — two in the initial phase and up to six if fully built out — if its latest series of industrial revenue bonds are approved in March by the village council.

Currently, the data center has three, fully-operational buildings with the fourth nearing completion, and the fifth and sixth under construction, a technology communications spokeswoman for Facebook said.

The data center acts as storage for Facebook’s social media sites such as WhatsApp, Instagram and Facebook.

The data center went online in early 2019 and employs more than 200 people in either full-time or contract positions. About 300 total jobs are estimated if the new series of IRBs is to be approved for expansion, according to the spokeswoman.

Those next two buildings will cost about $800 million to construct and equip, and can help create “hundreds of construction jobs” and up to 30 additional full-time employees once completed.

An industrial revenue bond — otherwise known as an IRB — is a tax break for companies that plan to expand by way of construction and equipping of a future project. According to the village’s agenda, “The industrial revenue bonds would provide real property, personal property, gross receipts, and compensating tax exemptions to defray part or all of the costs of the project which may serve to encourage economic development in the area … In return for tax exemptions, the applicant would agree to an annual payment in lieu of taxes for each data center.”

While no dollar amount is set for an annual payment, the hope for the village and Greater Kudu, LLC is that the series of IRBs will be approved at the mid March meeting. The village and the company are working through the application to make sure needs are met for both parties.

The mayor said economic development will play a big factor in considering issuing IRBs to expand the data center.

Griego was citing Facebook’s last round of grants sent out to local districts in the county, with Los Lunas Schools and Belen Consolidated Schools each receiving $100,000 for STEM (Science, Technology, Engineering and Mathematics) education.

“I was considering the economic benefits that we would have at this time,” Griego said. “Facebook has been donating to schools and other non-profits throughout the area to advance STEM education. I think it’s huge.”