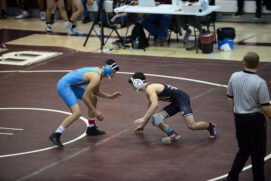 Wrestling will be the last sport to begin its season, with a start date of April 12 in order to ensure the sport is able to compete as normal.
News-Bulletin file photo

Fall sports are going to look a lot different this year.

Namely, there will only be three— volleyball, golf and cross country— that occur during the fall semester. Everything else — football, soccer, basketball, wrestling and all other winter sports have been pushed to start dates after the new year.

The New Mexico Activities Association released their Plan to Play on Wednesday, July 22 in response to Gov. Michelle Lujan Grisham’s revised public health order from the week before which stated contact sports, including at the high school level, would not be allowed until at least the end of July, with the option for that order to be extended.

As a result, those sports which qualify as contact, are not even allowed to hold organized workouts.

The revised public health order came following a steady increase in daily case numbers across the state and the return of some of the previously lifted restrictions.

As things stand, cross country and golf will be the first sports to resume, with a schedule that begins competition on Monday, Sept. 14. The championship for golf doesn’t take place until the spring, and is scheduled for June 21-22.

Cross country will run until the weekend of Nov. 13-14, when the state championships will take place.

As with all sports — but particularly in cross country — the meets will not look as they have in the past while a ban on mass gatherings is in place. 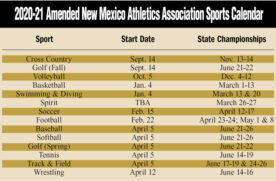 “We will also have to look at staggered times. You’re on the bus, you’re there, you warm up and run, and then you leave. It’s not going to be hanging around and watching all the races anymore. We will put those guidelines out to the cross country coaches.

“I have been in contact with them and they are aware there will be some changes to cross country. All the coaches are willing to do whatever they can to make sure their kids can compete.”

The reason for the delayed start is to allow for time for student-athletes to adapt to whatever format the school year begins in, be it remote, hybrid or entirely in-person.

Belen Consolidated Schools and Los Lunas Schools are both planning to begin the year in hybrid learning, with students in the classroom part of the week and learning from home the rest of the time.

“So when we say sports start on time, we are looking at cross country and fall golf would start mid-September. We shifted it back so our schools and kids can get acclimated to their new environment and then they can participate.”

How practices will work when students aren’t in the school building full time is up to the individual school districts, but as long as schools aren’t operating entirely online as they did last spring, sports will go on.

Volleyball will be delayed even further, beginning on Oct. 5 and running into December.

Scheduling in volleyball frequently relies on tournaments, where a team will spend three days at a location and get in a number of games in one go, but tournaments will not be allowed this year in order to limit the number of people each athlete is exposed to.

Teams have also been encouraged to avoid any overnight travel to prevent athletes from staying in hotels.

“For example, if we have a football game with two schools very far apart and they usually stay the night we’ve suggested they meet in the middle. Find a neutral location to play that football game so you are not spending the night,” Marquez said.

“That is going to be a restriction that you go down and play and then come back, no overnight travel. We are going to have athletic directors think of games in their region to accommodate the no travel restriction.”

Wrestling is the sport which will see the longest delay, pushed all the way to an April start alongside the spring sports in order to ensure the best chance of the sport being safe.

“Wrestling is one of the hardest sports because of one-on-one contact. In order to make sure we have a really strong wrestling season, we have shifted that back past January. We have even shifted it to the April through June time frame,” she said.

“We are trying to make sure we have that sport and there’s no issue when it comes to the contact with wrestling.”

Summer workouts for the sports which are allowed to continue working out will be required to wear masks during their workouts, in line with the 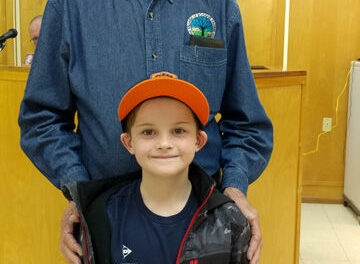