Daily life is all about teamwork for Mimi Power and her assistance dog, Sally, a golden retriever.

As a result of a birth defect, Power, a 66-year-old retired therapist from Belen, suffers from Arthrogryposis — a musculoskeletal disorder that is characterized by multiple joint contractures found throughout the body.

As a result of the disorder, Power is an amputee who manages life from a scooter.

“She makes a big difference in my life,” Power says of Sally. “I feel more comfortable with her here.”

In May, Power got to bring Sally home for the first time. The service dog graduated from Assistance Dogs of the West in Santa Fe, where she was trained by students of La Mariposa Monetessori School.

Part of Sally’s training required going to the store with her owner. “I had to give my money to her, and she put her paws on the counter,” Power said. “She had to take the purchases and give them to me.”

The devoted companion assists her owner in more ways than one, as Power operates her electric wheelchair through her spacious house in Casa Colorada.

Because there is so much strain on her muscle joints, Power cannot bend over to pick up items. Sally picks up items, such as hair combs and bottles, and puts them in Power’s hand.

The golden retriever also pitches in by helping her owner open doors.

“Her biggest job is picking up for me. She likes to work with me outside in the garden, too,” Power says. “She loves to hang out with the other animals. We have other dogs she can play with. If I’m home alone, she can protect me.

“Sally helps me in the art studio, picking up brushes. When I take my art classes, she lays under the table.”

Power’s new companion was rescued along the highway near Taos. When Power first went to Santa Fe, she met numerous dogs before finding her match in sweet Sally, the youngest of the bunch.

“I had my choice between Sally and one other dog,” Power said. “By then, she won my heart. She has a lot of life. And she’s funny.”

Power and Sally go on regular outtings, including trips to Wal-Mart, the doctor’s office and local restaurants.

“Where I go, she goes,” Power said. “She knows when it’s time to work, and she loves to go in the car.

“She knows the commands. She learns to come with a more formal command — to sit down and to turn the lights on and off,” she said. “She can also put her paws in my lap and say, ‘hello.'”

When the weather gets cold, it can be hard for Power to take off her jacket. Sally has learned to grab Power’s sleeve to help pull it off.

“She can even get the phone for me,” Power said. “She’s a smartie.”

Although Sally’s reward for her hard work is often just praise and loving pats, Power will sometimes give her faithful companion a dog treat.

“She is the happiest dog,” Power said of Sally. “She gets a certain glow. And she likes to clown around. The other day at Wal-Mart, she put her nose in a whole bouquet of flowers. I guess she had to ‘stop and smell the roses.'”

People tend to stop and ask her about Sally. They like to pet the warm and loving dog.

“Sally likes the added attention. She shakes hands with everyone she meets,” Power said.

“We use a haltie, not a muzzle, which allows her to be led by the head instead of by the throat. That’s better and safer. You don’t force or pull against the dog.”

In a short time, Power has formed a deep relationship with her new friend.

“You have to be close,” she said. “I think our bond is getting stronger as time goes by.”

What is Assistance Dogs of the West

Assistance Dogs of the West is a not-for-profit agency. It’s primary purpose is to train dogs to serve people with disabilities. It currently is part of the curriculum at Desert Academy, Santa Fe Preparatory High School and La Mariposa Montessori School, where students are taught the principles of training assistance dogs, particiapte in exercises to help them to understand the meaning and experience of being disabled, and learn how the dog and person with disabilities will interact and navigate the world more effectively and efficiently. 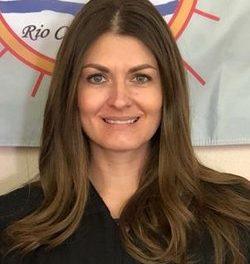