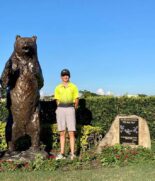 Grady Cox poses next to a statue of a bear during a gold tournament in Florida.

A Belen High School freshman had the opportunity to travel to Florida to compete in a golf tournament two weeks ago. Grady Cox, who is a freshman at BHS and a member of the golf team, finished ninth in the tournament, which featured some of the top young golfers from around the world.

Cox, who is already a team captain for the Eagles despite his youth, appreciated the opportunity to get to play against some of the top golfers in his age group.

“The competition was really diverse,” Cox said. “Locally you don’t really get to play against people from California and from all over the world as I did there. It was a really good opportunity to make me a better golfer.”

Belen golf coach Donald Marquez, who has been working with Cox since he was in seventh grade, had high praise for Cox, who is the team captain despite his youth.

“Honestly Grady’s work ethic just rubs off on everyone,” Marquez said. “The other kids don’t want to disappoint him because they know we’ll be competing in state and he’s going to do his part. He just brings up the whole team. He even makes us coaches coach harder. He’s a special kid.”

It’s not often that an athlete such as Cox comes along, according to his coach.

Cox in action during a tournament in Florida
Submitted photo

“Grady is just one of those special athletes. You don’t see a lot of them come through,” Marquez said. “He’s constantly working hard, he’s coachable, he does everything I tell him.

“To see him improve, I’ve had Grady for two years now, since he was in seventh grade and from one year to the next he made huge strides, he was shooting high 70s, now he’s a plus one handicap.”

In addition to his accolades on the golf course, Cox is also an honor roll student, with his work ethic carrying over to the classroom.

Despite the age gap between him and some of the older golfers on the team, Cox said he doesn’t feel intimidated in giving advice to them.

“I’ve known them for awhile at this point, we’ve built up some friendships so I don’t worry about correcting a few things here and there,” Cox said. “A lot of times a group of us will go out and we’ll play nine or we’ll play 18 and help each other along as we go.”

His main priority, in the event that the spring golf season is able to continue as scheduled is to have a good experience at the state championship.

“It would be nice to be able to win a state championship individually, but it would be even better if we were able to do it as a team,” Cox said. “It would be a really good bonding experience for us and help make me a better captain.”

Cox started golfing as a two year old with a set of plastic clubs and got hooked on the sport from there.

With golf courses shut down during the state mandated two week reset, Cox worked on drills in his backyard, where there is a net set up he can hit into. The biggest thing he has been working on is trying to put a little more distance on his shots without losing his accuracy.

“I’d like to have extra distance but I need to keep the accuracy also,” Cox said. “I can’t be putting myself in a position where I’m missing fairways and spraying all over the course.”

Marquez said Cox has been texting him nearly everyday asking for drills he can do at home to help improve his game.

“I think he’s been going crazy a little bit not being able to be out on the course,” Marquez said. “So I’ve been trying to keep challenging him with different drills and make sure he’s got enough to work on at home.”

Marquez submitted Cox’s name for the High School Golf National Invitational, the top tournament for high school aged golfers in the country, which was held at Pinehurst Resort in 2020. While they do not know yet if he will make the field, Marquez said he had already advanced past the first cut.

The Eagles golf season can begin March 22, 2021, with the state championships currently scheduled for June 21-22.

Women’s Golf Association recap of the play in March