There is a certain magnetism that draws fans to the music of Incubus. Whether it’s their catchy guitar riffs, beautiful melodies or tender lyrics, they continue to inspire and entertain listeners with the creation of each new collection of songs.

After the release of six albums over the past six years, including the multi-platinum, “Make Yourself,” featuring the hit single, “Drive,” Incubus has built such a loyal following that its current CD, “Morning View,” went platinum in just 10 weeks.

The California rockers moved into a magnificent, Malibu mansion to create their latest work. They set up their gear in the living room — with a breathtaking view of the ocean — and began creating what Lead Singer Brandon Boyd calls “our most free-flowing work to date.”

“The easiest thing in the world would be to repeat the same equations that worked for us in the past, but with repetition would come demise. We needed to start fresh and rewire our transmitters. And, in doing so, we wrote what is, in my opinion, our best record to date.”

The melodic songs of “Morning View,” inspired by heartbreak, track the band’s musical diversity. Their first single, “Wish You Were Here,” continues to be a favorite song on the album. Brandon calls it a “simple, straightforward ditty about the beauty of a moment in paradise and the desire to share that moment with someone of like mind.”

“Warning” is a song that connects with young women everywhere on a deeper level. It tells a story about a person who has the world at the tips of her fingers, but, through the art of distraction and compromise, she wakes up one day to find it has all slipped by her. “The information she gains from her mistake she shares in song with the rest of the world. Kind of a ‘don’t do what I did’ lamentation,” Brandon says.

“Teen People” recently named Brandon one of the “Hottest Guys in Music.” It’s not surprising that the approachable lead singer appeals to female fans of all ages. The artist’s close relationship with his mother, Dolly Wiseman, sets him apart from the cigarette-smoking, beer-guzzling rock stars making music today. Brandon often talks about her influence on his creative side while he was growing up in southern Califor-nia. The woman, who practices yoga and loves books, has always encouraged him to take chances.

The guy known for his sensitive side isn’t afraid to write about real-life experiences, such as divorce and matters of the heart, including love and loss. Songwriting is a form of self-expression for Brandon. Take the hard-edged “Just a Phase,” for example.

“You are a fingernail running down the chalkboard/I thought I left in third grade/Now my only consolation is that this could not/Last forever even though you’re singing and thinking/How well you’ve got it made.”

The song “Aqueous Trans-mission” is unlike anything Incu-bus has ever created. Listeners are transported to a magical land, with the aid of Brandon’s soft, soothing voice and the band’s free-flowing sound.

“One late evening, we began conjuring and experimenting with this track, and it quickly brought to mind the image and analogy of floating freely down a river,” Brandon recalled in a news release.

“It became exactly what we envisioned; a song so atmospheric and vibratory it would make those who listened to it doze off into a land of rivers, kung fu and unicorns.”

The music of Incubus is sometimes dark but always beautiful, and this is the band’s time to shine. Unlike the responsibilities of a 9-to-5 desk job, these guys have time to fantasize every day.

While the competition in the music world today is extensive, Incubus doesn’t seem to have any problem finding things to say.

It has everything to do with the fact the close-knit group has been friends for years. Brandon and drummer Jose Pasillas attended elementary school together and would often ditch class to go surfing. Guitarist Mike Einziger came aboard in middle school, and they all surfed together. Bass Player Dirk Lance joined the guys at Calabasas High School, where they formed the band Incubus.

The band was so nervous before its first show in the early ’90s at a Los Angeles club that Brandon’s mom had to suggest group meditation, in which they visualized swimming underwater and playing with dolphins, to relax.

In 1995, the band released “Fungus Amongus” on their own. After the release of 1997’s “Enjoy Incubus EP,” they took off for Europe with Korn. Their album, “S.C.I.E.N.C.E.,” hit stores not long afterwards, to worthwhile sales. The band toured non-stop for the next two years with well-known bands such as Sugar Ray and Limp Bizkit. It was around that time DJ Chris Kilmore replaced the band’s original turntablist, DJ Lyfe.

The band’s popularity grew when Incubus won a slot on the second stage of the Ozzfest in the summer of 1998, and Korn invited the band to participate in the Family Values Tour that fall. The bandmates burst onto the hard rock scene with 1999’s “Make Yourself.”

It was during the making of this album the guys decided to go into therapy. While the members of Incubus are best friends, they say they sometimes fight like brothers, and tension can tend to grow when they hang out and work together every day.

DJ Chris Kilmore says, “Just being around these guys let’s me realize that we have a pretty good thing going on here, and, hopefully, it will keep continuing … that confidence that the other guys bring is a great feeling.”

The video for the hit single, “Drive,” features animation by Brandon and Jose. Because the record company’s video budget didn’t allow hiring expensive video animators, the bandmates took over the creative duties of drawing individual cells. Brandon actually drew himself for the shoot, complementing the lyrics “Whatever tomorrow brings, I’ll be there with open arms and open eyes.”

Now, with the soaring success of “Morning View,” the band is headed this way. Incubus will drive into Albuquerque on Tuesday, April 23, to perform at Tingley Coliseum. Hoobastank and Phantom Planet are slated to open for the band.

Guitarist Mike Einziger has said every night he looks forward to the acoustic section of the band’s set, which usually consists of the song “Drive” and a song called “Mexico.”

“It’s a really intimate part of the show where everything gets stripped down and you can hear the audience singing. I really feel that’s a special time for me and the audience together.”

With their hard-rocking sensibilities and soulful lyrics, Incubus will fill Civic Tour arenas with fans ranging from metal heads and young punk rockers to hip-hop and alternative rock enthusiasts.

Lead singer Brandon Boyd puts it best when he says, “We’ve always prided ourselves, as a band, on letting our music speak louder than any kind of production we bring out or banner we put behind us or stage we set up.” 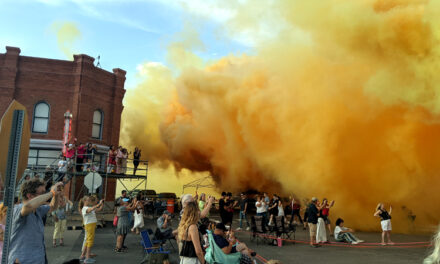 Diamonds in the Sky

What’s new in the rock world?