Rivera set personal records in the shot put at the Albuquerque Invitational at Milne Stadium on Saturday and the discus at the Marilyn Sepulveda Invitational at the University of New Mexico Soccer and Track and Field Complex on Monday.

The 6-foot-2-inch, 230 pound senior, who is already a three-time state champion in the shot put, exceeded his career best in that event with a throw of 57-feet 4-inch to win the Albuquerque Invite.

Rivera said he’s starting to feel more fluid after switching from a slide to a spin technique a year ago.

Added Eagle head coach Kevin Benavidez, “It’s all about form and hitting your points when you’re spinning. This whole week, Jace has been real consistent about hitting his spots — those are the little things. That’s why he’s doing better right now.”

Rivera, who finished second and third in the discus at state the last two years, also has been throwing the discus better than ever. He bettered his personal best mark by more than three feet on Monday with a toss of 169-11 to win the event. He also won Saturday’s meet with a throw of 161-5.

At both meets, Rivera competed against Class 5A throwers — a better caliber of competition than he’s faced all year. “That’s what’s been missing through the year — someone to push me,” he said.

La Cueva’s Scott Witt was doing the pushing. Witt, who won last year’s Class 5A state shot put crown, edged Rivera by 1.5 inches in the shot put at the Sepulveda meet with a throw of 56-4. He was second to Rivera in the shot put on Saturday and second to him in the discus at both meets.

Also earning an invitation to the Sepulveda meet from Belen’s boys team was Rodney Harrison. Harrison placed fifth in the 400-meter run in a personal-best time of 50.4 seconds.

Sherwin Price also received an invitation to participate in the high jump at Monday’s meet, but Benavidez said Price was sidelined for the week to rest a sore quadricep muscle.

Both Harrison and Price sat out Saturday’s meet as Belen tied with Albuquerque High for eighth place in a field of 17 schools.

Also scoring points for the Eagles were Derick Jaramillo and Terrell Trantham. Jaramillo placed fifth in the 100-meter dash. His time of 11.1 seconds was his quickest of the year.

Trantham made the finals in the 110-meter hurdles and finished in a personal-best time of 15.9 seconds.

The Belen boys scored 18 points, tying Albuquerque High for eighth place at the meet that included 17 schools. La Cueva won with 99 points, followed by Manzano with 64. Albuquerque Academy and Sandia tied for third place with 45.

“All our times have gotten better,” Benavidez said. “Everybody’s improving and that’s what we’re looking for. As the season goes on, hopefully our times will keep going down.”

Lady Eagles — Belen High School’s girls track and field team was idle during the spring break. But Jocelyn Chavez was back in action at the Sepulveda meet.

After a 10-day layoff after pulling her hamstring at the Socorro Invite, Chavez placed fifth in the high jump. She cleared 5-1. Tristan Baker of Cibola won the event with a leap of 5-3.

Chavez also competed in the triple jump but did not place. Her best mark was 33-4.

Belen’s full boys and girls teams will compete in Grants on Thursday.

Lady Warriors hold their own against Cobre’s power 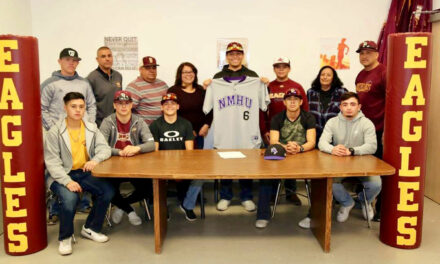