Former Los Lunas High School baseball player Josh Hernandez won’t be a Texas Ranger — at least not yet. Instead, he’ll be a Tejano and play ball next season at El Paso Community College.

Hernandez was drafted in the 46th round by the Texas Rangers on Wednesday in the Major League Baseball amateur draft. But Hernandez, who grew up in El Paso but transferred to Los Lunas when he was in the seventh grade, has decided to put off his professional baseball career for a while and fine-tune his game at EPCC.

“Their program is pretty good,” Hernandez said of EPCC. “Last year, they won the conference, and, this year, they just missed the (junior college) World Series. I’m going to play there a year and see if I don’t get drafted a little higher next year.”

The Tejanos placed third in the Western Junior College Athletic Conference last season with a 17-11 record (35-17 overall). They advanced to the Region V playoffs for the sixth year in a row, losing the game that would have sent them to the Junior College World Series to La Mar (Colo.) Community College.

Hernandez, who was a member of the Los Lunas Tiger baseball team that advanced to the state championship game last month, was recently named Class 3-5A Player of the Year by the New Mexico High School Baseball Coaches Association. As a shortstop and pitcher, he batted .645 for the Tigers his senior season. As a flame-throwing pitcher with a 90 mph fastball and a nasty spliter, he posted a 9-1 record, registered an ERA of less than 1.00 and recorded more that 100 strikeouts in just over 70 innings pitched.

The top prep player in New Mexico, and the only high school player from the state to be drafted, Hernandez was the 1,363rd overall selection in the draft that included high school seniors and college players. But being picked as low as he was didn’t concern Hernandez.

“It didn’t matter what round I got drafted in. I was just glad I got drafted,” he said. “I’ve been waiting for it since I was a little kid. It was cool to see my name up there.”

Hernandez’s high school coach, Steve Contreras, said he was surprised Hernandez was picked as late as he was.

“I thought he’d go a lot sooner. I thought he was deserving of going a lot sooner,” Contreras said. “It’s still a big honor. He’ll still get his chance.”

The Rangers drafted Hernandez as a catcher/third baseman.

“There had been a couple of scouts who talked to him about catcher because of his size and his arm strength. They compared him to ‘Pudge,'” Contreras said, referring to Rangers’ catcher Ivan “Pudge” Rodriguez.

One person who was thrilled Hernandez made the decision to forsake signing a minor league contract is his future college coach, Ken Jacome.

“Right now, he’s the prize of our recruiting class,” Jacome said of Hernandez. “We think he has all the skills to be a great baseball payer. We look forward to him coming here and being a big part of our baseball team next season.”

When asked if he’d consider using Hernandez as a catcher, Jacome said, “We want to develop him as a baseball player. If he comes in and he wants to be a catcher, we’ll work him more at catcher.”

Hernandez, who played catcher in Little League, said he wouldn’t mind switching positions. “Oh yeah. I’ll do it,” he said, adding that he’d play any position if it got him to the major leagues. 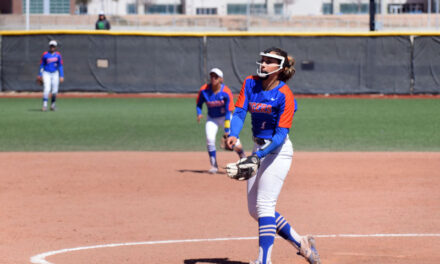