What do you think of when you hear the word “judge,” and how do you feel when you hear a person within your vicinity being referred to as “judge?”

It is a title that demands respect and possibly instills apprehension in the listener. This is understandable. Through court case adjudication, judges have the final word and make important and lasting decisions that impact our lives.

Upon taking the oath, each judge, regardless of jurisdiction, vows to uphold the U.S. Constitution, the Constitution and laws of the state of New Mexico, and to faithfully and impartially discharge the duties of the office on which we are about to enter. The oath, while not explicitly stated, includes a promise to strictly adhere to the Code of Judicial Conduct, NMRA, Chapter 21. Included within the Code of Judicial Conduct are four canons:

A judge shall uphold and promote the independence, integrity, and impartiality of the judiciary and shall avoid impropriety and the appearance of impropriety.

A judge shall perform the duties of judicial office impartially, competently, and diligently.

A judge shall conduct the judge’s personal and extrajudicial activities to minimize the risk of conflict with the obligations of judicial office.

A judge or candidate for judicial office shall not engage in political campaign activity that is inconsistent with the independence, integrity, or impartiality of the judiciary.

It is a great honor having the title of judge, and an even greater honor doing the work. It is a designation bestowed on so few individuals — through both elections and appointments — and it carries with it a great responsibility to serve the public fairly and impartially by avoiding even the appearance of impropriety.

We are collectively referred to as the “honorable,” and it is a title I take very seriously, and I would argue that a majority of other judges do as well. But what recourse do we, fellow judicial officers and the public, have when a judge engages in behavior or actions that are less than honorable? What option(s) do we have when a judge values the title more than the responsibility and violates one or more of the Canons?

To answer these questions, New Mexico developed a commission to investigate violations of standards and rules, and to hold evidentiary hearings to explore whether discipline is appropriate. Our Judicial Standards Commission was formed through the passing of a constitutional amendment in 1967, and began reviewing complaints in 1968.

The commission investigates confidential complaints that allege, among other infractions, willful misconduct, disability interfering with performance, and habitual intemperance.

Anyone can file a complaint with the commission, and instructions can be found at nmcourts.gov. After a complaint is verified, the accused judge is notified of the impending investigation, and has a chance to respond in writing.

The investigative process is lengthy and comprehensive, and if/when the allegations are proven during the evidentiary hearing, the commission will make recommendations of sanctions to the Supreme Court. Sanctions can include a combination of the following: removal, involuntary retirement, censure, fines and suspensions of judicial duties.

In 2020 fiscal year, there were 176 written complaints, of which 131 were verified. Of the verified complaints, the majority (85) of the complainants were litigants and criminal defendants (16).

It should be noted the commission lacks the authority to review decisions made by judges during case adjudication. It should also be noted that the majority of complaints made to the commission are dismissed (appellate issues or lacking substantiation) or disposed of informally. A complete list of formal disciplinary actions and opinions can be found online.

Judicial positions are prestigious and powerful, and therefore, are subject to continuous, thorough examination. Judicial authority does not eliminate accountability but instead increases it. Litigants and defendants before the court are accountable to judges, and judges are accountable to constituents.

As we enter into a new year, please be cognizant of the judges in our community. Know who we are and the types of cases we hear, and more importantly, make sure we remain, through our work ethic and actions on and off the bench, someone you can look up to and respect. Now more than ever our community needs an independent judiciary with judges who administer justice competently, fairly, and impartially.

(Magistrate Heather R. Benavidez was appointed by Gov. Michelle Lujan Grisham to the Magistrate Court Div. 1 bench earlier this year after former judge Tina Garcia retired. Benavidez’s term ends at the end of this month, and Miles Tafoya will take the bench in January.) 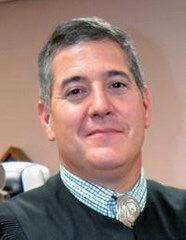 Giving Goose a home and a family