The Last Full Measure of Devotion 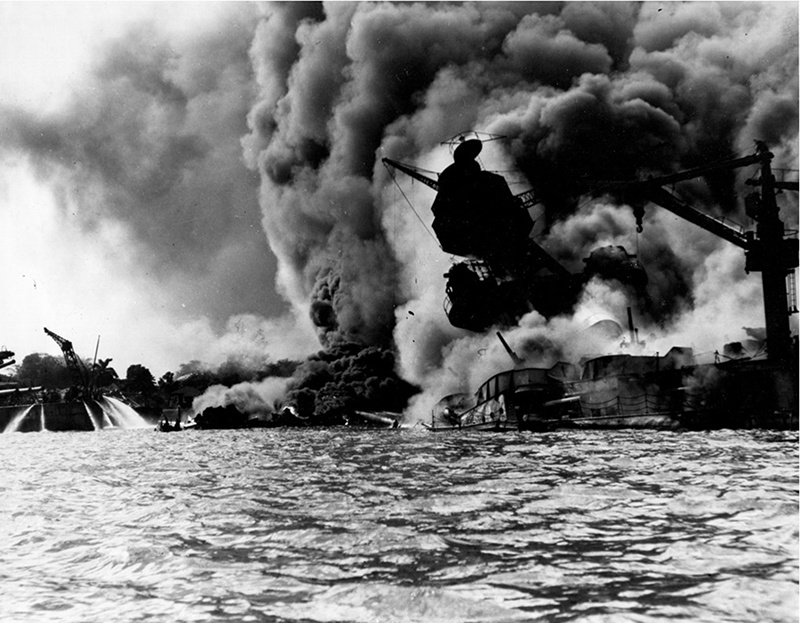 Photo courtesy of the National Archives The USS Arizona burning and sinking on Dec. 7 during the Pearl Harbor attack.

It was just a typical Sunday morning on the island of Oahu.  The temperature was in the low 70s with a partly cloudy sky and light east to northeast winds ruffling the flags on Pearl Harbor’s  Battleship Row and the palm trees on the sandy beaches.

A few surfers were already in the water off Waikiki, and families in Honolulu were finishing breakfast and dressing for church.

On the battleship USS Arizona (BB-39), the color guard was moving topside for the morning color ceremony and men were below decks eating in the crews mess and getting ready to relieve the watch. The ship’s chaplain was glancing over his notes for the 0830 religious service on the after deck and the chief boatswain’s mate was getting a work crew together for the days painting.

In the engineering spaces, the machinists were preparing for the daily maintenance chores on the myriad of pumps, gearboxes, valves and assorted other machinery under the direction of the duty chief petty officer.  Even though it was Sunday, the work still had to be done.

The Arizona was the second “superdreadnought battleship” in the Pennsylvania class. She was launched in June 1915 with assistant secretary of the Navy, and later president, Franklin Delano Roosevelt in attendance. Her principal armament consisted of 12, 14-inch guns in four, three-gun turrets.

She was heavily armored with 13.5 inches of Krupp steel around her waterline and between three and six inches of armor plating on her upper decks. She had a crew of 56 officers and 1,031 enlisted men.

Arizona had minimal participation in World War I, but was one of nine battleships (including the USS New Mexico [BB-40]) that escorted the ship carrying President Woodrow Wilson to France for the negotiations of the Treaty of Versailles.

From 1921 through 1940, Arizona was home-ported in San Pedro, Calif. In May 1940, she was transferred to Pearl Harbor, Hawaii, as a part of Battleship Division 1.

On Dec. 5, 1941, after a night firing exercise with the battleships USS Nevada (BB-36) and Oklahoma (BB-37), Arizona slipped into Pearl Harbor and moored alongside the quays on Ford Island for minor repairs 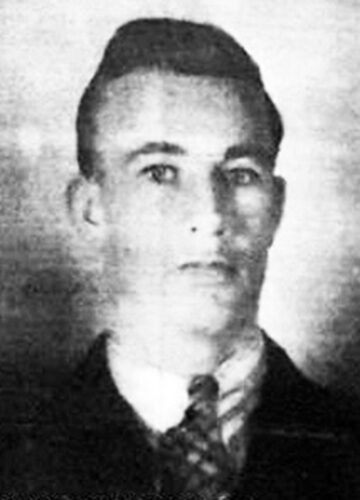 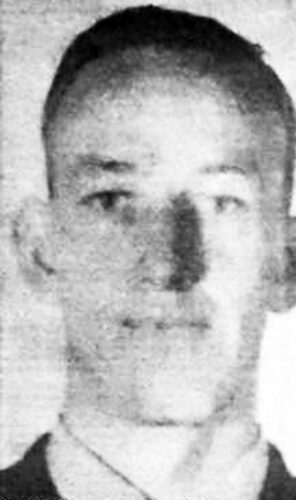 Among the crew who brought the ship into port on Dec. 5 were a father and son and 38 sets of brothers, including Wayne and Raymond Livers from the village of Jarales in Valencia County. These brothers were two of the six children (four boys and two girls) of Ira, a carpenter, and his wife, Effie Livers.

Raymond was born in Germany before his family emigrated to the United States and settled first in Grant County and then in Jarales. Wayne was born in the United States. Both boys attended Belen High School, where Raymond was active in agriculture, winning prizes at the State Fair in the swine competition, and Wayne played center on Belen’s championship football team.

Thousands of miles from Jarales and long before the Livers brothers joined the Navy, the world began to lurch toward a second world war. In particular, Japan came under the influence of hyper-nationalist elements who saw the United States as an inevitable enemy.

Harvard-educated Admiral Isoroku Yamamoto had devised a radical plan to take control of the Pacific by preemptively striking the U. S. Pacific fleet in Pearl Harbor.

On Nov. 26, 1941, a Japanese fleet weighed anchor and quietly departed their home ports in Japan under total radio silence. The fleet was commanded by Vice Admiral Chiuchi Nagumo and consisted of six aircraft carriers with 420 bombers and fighters, as well as battleships, cruisers destroyers, tankers and five midget submarines. 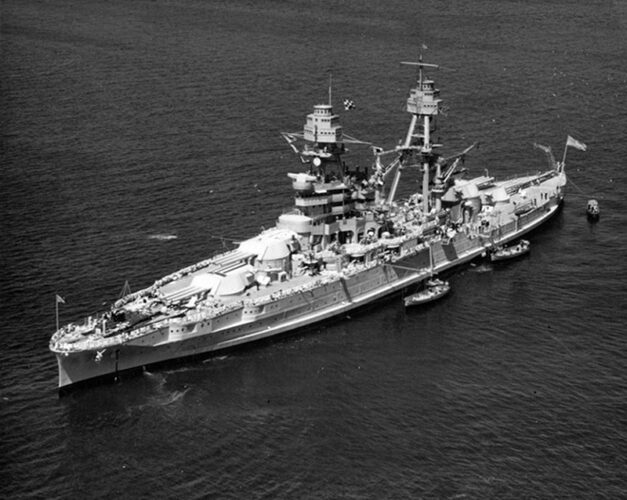 Shortly after 6 a.m., on the morning of Dec. 7, 1941, at a location about 200 miles north of the Hawaiian Islands, Admiral Naguma ordered his aircraft carriers to turn into the wind and launch the first of three waves of Japanese bombers, dive bombers, torpedo planes and fighters toward Pearl Harbor.

Just before 8 a.m., Commander Mitsuo Fuchida crossed the shoreline of Oahu and sent the famous message “Tora! Tora! Tora!” as he led the first wave of the attack on the U.S. Pacific Fleet.

During the three-wave attack, which persisted until nearly 10 a.m., 18 ships were either crippled or sunk, 300 aircraft were damaged on the ground and many of the drydocks and other facilities were badly damaged.

During the first wave, four bombs from torpedo bombers struck the Arizona, which was tied up alongside her sister ships, Nevada and Oklahoma, on Ford Island’s “Battleship Row.”

At 8:06 a.m. the fourth bomb penetrated the forward deck and detonated in a powder magazine resulting in a tremendous explosion, which lifted the 33,000-ton ship out of the water and essentially tore it in half. The resulting fire raged for two days as the ship slowly settled to the bottom.

Of the 1,512 men aboard, 1,177 were killed as a result of the attack. The casualties from the Arizona constituted nearly half of the 2,403 individuals who died on “the date which will live in infamy” at Pearl Harbor.

The two Livers brothers from Jarales were among the seven New Mexicans killed aboard the Arizona. The others are Oren Sumner, of Albuquerque; Ivan Block, of Glorieta; Clarence Buhr, of Raton; Holger Sorensen, of Española; and William Spurgeon Walters Jr., of Tucumcari.

Due to wartime secrecy, the Navy did not immediately disclose the location of the deaths of these New Mexico sailors, saying in a pre-Christmas release, only that they were killed in an “undisclosed action.”

We can only imagine what Ira and Effie Livers must have felt as they opened the dreaded telegram that gave them the news of their sons’ passing. 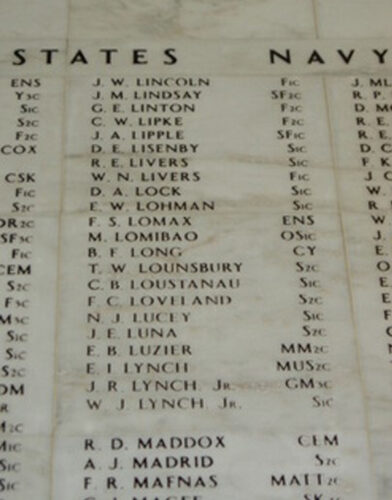 The Livers brothers’ names on the USS Arizona Memorial plaque.

Of the 38 pairs of brothers aboard the battleship, 23 were killed. This isn’t even the worst family tragedy during the war.  In November

1942, five brothers from the Sullivan family from Waterloo, Iowa, were killed when their light cruiser, the USS Juneau (CL-52), was torpedoed off the coast of Guadalcanal.

After this incident, the Navy adopted an informal policy of separating brothers from serving on the same ship. However, the policy was never formalized and was only loosely enforced.

No one knows where the Livers brothers were when the bombs hit the Arizona. They may have been asleep in their bunks or they may have been on watch in the engineering spaces. Their bodies were never recovered and they remain entombed with more than 900 of their shipmates in the sunken hulk.

Both brothers were posthumously awarded Purple Hearts, and their names are listed on the USS Arizona Memorial in Pearl Harbor.

The Livers brothers, the other five New Mexico sailors who died aboard the Arizona, and all of the more than 2,000 men and women from New Mexico who were killed during World War II deserve our heartfelt thanks for their sacrifices and heroism. 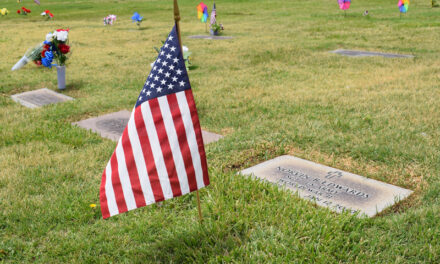