The Lady Eagles softball team opened up its district season on Saturday with a doubleheader at home against Las Cruces Oñate. After a nine-inning first game and a 31-run second game, Belen walked away with a 1-1 district record.

The Eagles dropped the first game of the doubleheader, 7-6, after coming back from a 5-2 deficit. The split moved the Lady Eagles to 5-6 overall.

The Knights got things started in the first inning with a run to take an early lead. But the Lady Eagles answered back in the bottom half of the inning to tie the score, 1-1.

The Knights jumped out big in the fifth inning, plating three runs for their biggest inning of the game, 4-1.

Belen tried to mount a comeback, but was held to only one run in the bottom half of the fifth. Oñate’s lead was now two runs, and, in the top of the sixth, the Knights pushed it to three, 5-2.

The Eagles found themselves at the bottom of a three-run hole, but not yet out of the game. And in the sixth inning, the Eagle bats came to life.

The rally was started when Martina Chavez and Brandi Dearing both reached on errors with two outs. Chavez and Dearing, along with Cassandra Gallegos, who lead the team offensively going 2-3 with one run, and Navora Cordova, all found their way home to give the Lady Eagles their first lead of the game, 6-5.

“We finally woke up in the sixth inning,” Salas said. “It was really a combination of them making a couple of errors and our lower half of the lineup coming through.”

But it would be the last time the Lady Eagles scored in the game. The Knights evened the tally at 6-6 in the seventh.

Darlene Baca flashed some leather in the outfield, but her flashy glove work in the field was not enough, and, in the top of the ninth, the Knights were able to plate another run and put the Eagles on the spot.

The Lady Eagles did not answer in their last at bat.

Belen scored its six runs on nine hits and committed one error. Belen batters only struck out once.

The second game would not take as many innings, but the scoring was much more prolific. The Lady Eagles came out on the better end of an 18-13 barn-burner.

The scoring came early and often for both teams. The Knights put up six runs in the top of the first, and the Eagles posted four. Though the Knights started off strong, the Eagles held Oñate to only two runs in the next three innings.

While the Knights were having trouble finding home plate, the Eagles brought in run after run. Belen plated four runners in each of the first three innings and five runs in the fourth to take a 17-to-7 lead. The Knights were able to stay alive by scoring four runs in the fifth and holding the Eagles scoreless. Though the Knights had cut the Eagles 10-run lead to six, 17-11, the hill proved to be to much for Oñate to climb, and the Lady Eagles walked away with a win.

The Eagles scored their 18 runs on 18 hits and committed only one error.

“Everyone, as a whole, has been hitting the ball,” Salas said. “But what has kept us in some of the games is our defense, because the other teams are hitting off us.”

Navora Cordova was in the zone at the plate going 4 for 4 and driving in three runs.

The Lady Eagles returned to the diamond on Tuesday to face Deming in their third district contest at home, while the boys hit the road for the third straight game to face Deming (no scores were available at News-Bulletin press time).

Eagle baseball — The Belen boys didn’t fare nearly as well as their female counterparts on Saturday. The Eagles traveled south to take on the Knights in Las Cruces and were outscored 23-1 in the two games.

The Eagles dropped the first game 11-1 and fell in the second game 13-0. Belen’s baseballers are 0-2 in district play and 3-6 overall. 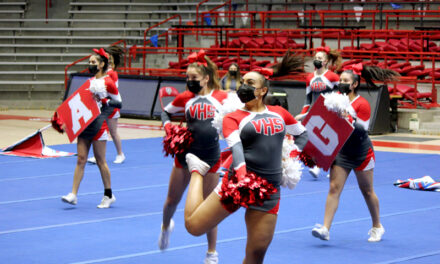 Lady Warriors hold their own against Cobre’s power 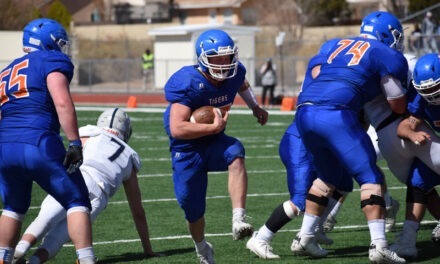