Los Lunas runner Maria Liot led the entire field, winning the event in a time of 20:43. The Lady Tigers’ four other scoring runners all placed in the top seven.

Coach Larry Padilla had high expectations going into the meet, but even he didn’t expect such a convincing victory. “I thought they would win the meet. I didn’t think they would win it as strongly as they did,” he said.

The Lady Tigers final score of 19 points was just four points shy of a perfect score. In cross country running, each scoring team member is assessed a number of points based on his or her finish (one point for first, two points for second, etc.). A perfect score is achieved when the team’s five scoring athletes finish first through fifth. The Lady Tigers were certainly close. In addition to Liot’s first place, Danielle Torres finished second in a time of 21:00, Monica Padilla took third in 21:11, Jamie Benavidez was sixth in 21:40 and Kathy Latimer was seventh in 21:42.

Padilla said another sign of the team’s strength is the “pack time,” or the amount of time between the team’s first- and fifth-place runners. The Lady Tigers had their best pack time ever at 59 seconds.

According to Padilla, the shorter the pack time, the better. “It shows the depth we have,” he said.

Despite the Lady Tigers’ two meet victories — in which they have defeated 18 opponents — the team is ranked only 11th in the weekly combined-classes coaches’ poll. It doesn’t concern Padilla, however. He said the poll is likely based on last year’s performance and not the current team.

“A lot of coaches have not seen us run yet,” he said.

Matt Cash, who finished sixth overall with a time of 17:22, led the Tigers.

The coach said the boys ran well. “The guys actually ran much stronger than they did the week before,” Padilla said in reference to the team’s second place finish at the Alamogordo meet on Sept. 7.

“We were against a much more competitive group of boys this week,” he added.

The Los Lunas cross country teams will compete this Saturday at the Belen Invitational. Padilla said both the boys and girls should do well, but he’s careful not to proclaim victory prematurely.

“It’s probably safest to say we expect to have another strong showing,” he said.

Eagle cross country — The Belen Eagle cross country team pulled out of its scheduled meet at Rio Grande on Saturday. BHS Athletic Director Danny Griego said that coach Joseph Garcia had National Guard obligations last Saturday, and it was decided not to send the team without its coach.

The Eagles will host the Belen Invitational this Saturday. Races start at 9 a.m. 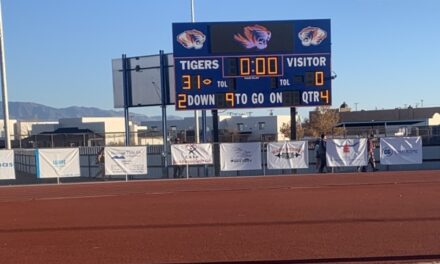 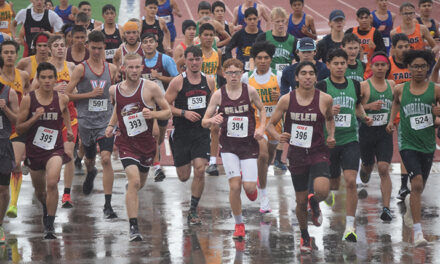 Local cross-country runners shine, in the rain at LL invite