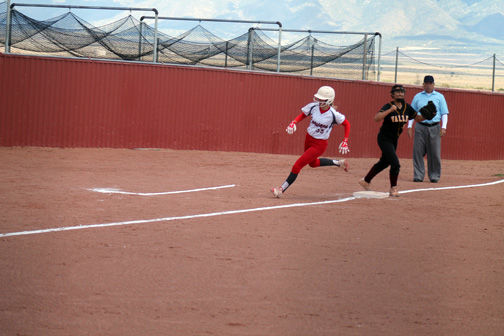 The Lady Tigers kept their season alive with a 15-0 shutout over Kirtland Central on Saturday afternoon.

“They’ve been working hard and doing well because their working together,” said Los Lunas head coach Paul Cieremans. “They’re working as a family.”

Los Lunas (20-7, 8-0) came out swinging, knocking in four runs in the first inning. Senior Kylie Perez got things rolling with a three-run homer before Kirtland Central made a pitching adjustment. With eighth-grader Nalaney Paul on the mound, the next three Los Lunas batters did not get on base.

Unfortunately for the Lady Broncos, the Lady Tigers didn’t slow down.

Sophomore Alex Tenorio knocked out a two-run homer in the second inning, and the Lady Tigers continued to roll. Los Lunas eventually forced the mercy rule in the fourth inning.

Tenorio also had a field day on the mound. Led by her six strikeouts, Los Lunas allowed only one hit.

Cieremans credited the defensive success to the team’s chemistry.

“I can’t say it’s just Alex,” said Cieremans. “But without her, we wouldn’t be able to make those plays. She’ll tell you herself that it’s about teamwork.”

Up next for Los Lunas is a second-round tournament game against Portales. The game will begin at 8:30 a.m., Thursday, at Cleveland high School. Cieremans expects tougher challenges ahead, but is confident in his squad.

“We were able to get everyone some playing time today, which is good,” said Cieremans. “Here on out, the games are going to be a lot closer than this.” 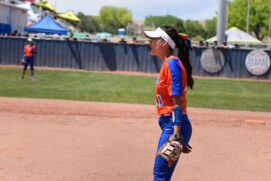 Meanwhile, Valencia advanced to the next round after a 6-3 win over Valley.

Valencia bounced back late in the game, scoring four runs in the fifth inning and two runs in the sixth.

“Valley is young, but they’re scrappy,” said Young. “We forced them into mistakes that ended up giving us the game.”

Up next for the Lady Jaguars is a second round game against Artesia. The game will begin at 8:30 a.m., Thursday, at Cleveland High School.

“I’m proud of these girls for the resilience they have,” said Belen head coach Joe Duran. “It hurts to lose any game at state, but the payoff is these girls got to play and gain experience all season. It will be bittersweet to see my seniors graduate.”

Duran said seniors Serenity Salinas, Aislinn Carillo and Juliana Garrett were in eighth grade when they began playing for Belen. Though their leadership will be missed, Duran looks forward to the next season.

“I’m proud of them for getting to the state tournament,” said Duran. “Now they know what it will take to get better as a team.” 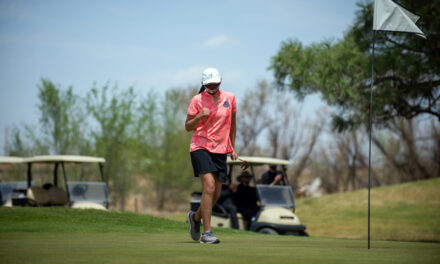 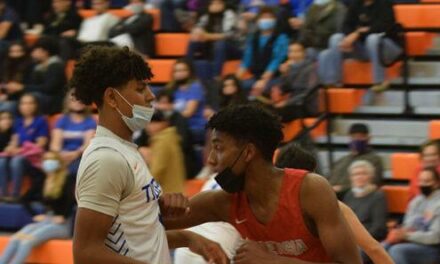