Talk to your legislators about

Peoples Energy — what an oxymoron. In a world where citizen health and resources are continually compromised for corporate profit, the latest State Air Quality Bureau decision to approve the application for a power plant in Rio Communities only serves to reconfirm the corporate mantra — profit over people.

This is no excuse, however, for the lack of courage on the part of our state representatives to stand up to Peoples Energy and others like them and truly behave like elected public servants. They are elected to serve the good of the public instead of the desires of Valencia Energy.

What will be the real trade-off in dollars and cents for Valencia and Socorro counties if Valencia Energy gets its way? A loss of property values in the Rio Communities area and an increase in asthma and other health-related problems related to an increase in air pollution.

How many people will Valencia Energy employ? Three to seven, and most of these will be from out-of-state.

… While dangling the property-tax carrot in front of Valencia County representatives, Peoples Energy neglected to relate not only the amount of its “real emissions” but also the real costs of the proposed power plant. These costs were passionately expressed during the public hearing in April by scores of Valencia County citizens. Was anyone listening?

During this air quality permit public hearing in April, Bill Powers, an engineer from San Diego, hammered on the fact that, during turbine start-up and shut-down, the proposed plant’s toxic emissions will be well over EPA limits, therefore contradicting Peoples Energy data on several vital counts.

We are told New Mexico Air Quality has proposed safeguards to correct this — Peoples Energy will monitor their own emissions! And, if this is not questionable enough, they have provided yet another failsafe for the company — let the manufacturer of the equipment that will be used in the proposed plant come up with the figures for the plant’s emissions, thereby eliminating any independent monitoring by the state. Isn’t this scenario a little like having the fox guard the chicken house?

The relationship between the natural air inversion which takes place during the winter months in the valley and the proposed power plant emissions has never been adequately addressed by the State Air Quality Bureau or Peoples Energy. The data used for the model for disbursement of air pollution was taken from the Albuquerque airport. No studies have been done on the disbursement patterns in the area (Rio Communities) where the proposed plant will be built.

Meanwhile, once the plant is up and running, I can just imagine the bureaucratic hurdles that will have to be overcome to prove that the emissions surpass those set by the EPA.

I am tired of public regulatory commissions created to protect and to serve the public hiding behind bureaucratic brouhaha which subsequently renders them innocent of any responsibility for actions taken that protect corporate monetary interests while compromising the health and well-being of the public.

“Our hands are tied” is a frequent explanation. Would this be the case if their children’s health was being compromised?

Hopefully, our politicians can garnish the political will to protect New Mexicans from the herd of energy corporations waiting on our borders to suck up our water, foul our air and poison our citizenry.

New Mexico has no comprehensive energy policy in place to prevent the current rape for out-of-state profit. The field is wide open for energy companies to take advantage of a state which has never had a lot of heavy industry and, therefore, has no legal barriers in place to protect our natural resources. This situation is more than fixable. Valencia County Commissioners can be reached by contacting the Valencia County Manager at 866-2003.

Those interested can attend the State Water and Resource Interim Committee meeting in Socorro on Oct. 1 and 2 or contact elected representatives at Office of Representative (Name), U.S. Senate, Washing-ton, D.C. 20510 or Office of Re-presentative (Name) U.S. House of Representatives, Washington, D.C. 20515 or e-mail them at wwwsenate.gov or www.-house.gov. You can also call them at (202) 224-3121. It is more than time for our elected officials to promote responsible growth — the non-toxic kind.

He’s proud of his heritage

My godparents and uncle and aunt, Abe and Nora Baca of Albuquerque, recently sent me an article titled “Saga of the Sea.” This article was written by my cousin, Jim Boeck. The article … highlighted my uncle, Elue Baca, a person I never met but was so proud of for his service to his country. I am very proud of the Baca heritage.

My father, James E. Baca, brother of Elue, Levi, Adam, Abe and Fermin, passed away in 1989. My father was the only brother who stayed on the west coast and raised all seven of his kids.

The richness of my family heritage is told in great detail on my visits to Uncle Abe and Aunt Nora’s home. Although we are separated by a few states, my aunt and uncle keep in touch with me the most. I was very proud of my uncle Abe and cousin Jimmy for the research and history of my uncle Elue’s venture into history.

As a Baca, I am proud to carry our name and know we come from hard-working families. It’s this devotion to God, family and life that feeds us all and supports our souls. I wanted the readers in New Mexico to know I am proud of Jimmy Boeck for the story of my uncle Elue and, especially to my godfather, Abe Baca, who has been a father to me, since I lost my father.

What a great story — to live part of my uncle’s life before our lord and savior took him. Once again, thank you and God bless.

(Editor’s note: Mr. Baca is referring to James Boeck’s column on La Historia del Rio Abajo, the history column written by the Valencia County Historical Society, that appeared in the July 20 edition. The column appears in the La Vida section of the News-Bulletin on the third Saturday of each month. The editor is historian and professor Dr. Richard Melzer.)

Do you know musicians?

I’d like to ask the community a question, and I thought the best approach would be to write a letter to you. One of my hobbies is record collecting, and, some time back, I came across a couple of records recorded here in Valencia County. I was wondering if anybody remembers anything about the recording studios or the artists.

The first record is a 45 rpm on the Chuckie record label. It is a record distributed by the Sounds of Music in Belen (P.O. Box 3). The artists are the Kountry Kin. The record was probably recorded in the mid-1970s, because the songs are “Bad Moon Risin'” and “Wild Side of Life.”

The second record is a 78 rpm on the Mustang Record Company label, in Los Lunas (Route 2, P.O. Box 518A). I’m not sure of its age, but it could be 1950s or 1960s. The artist is Perry Washburn and the Rocky Mountain Canary Boys. The songs are “Pocahontas Baby” (A-side) and “So I Screamed Bloody Murder” (B-side), both written by Mr. Washburn.

I really like the song “Bloody Murder” (it’s a very cute song) and was wondering if the record got any local radio airplay. I just find it interesting that Valencia County had at least two record companies. Maybe even the artists still reside in Valencia County. I would appreciate any information about either of these records. Thank you.

(Editor’s note: Anyone with any information about these record companies or artists can call Sandy Battin at 864-4472 and we will pass the information on to Mr. Granados.)

My family and I regret to inform all our treasured friends and customers we will be permanently closing the Homestead. Thanks to all you wonderful customers we were privileged to serve for 15 years. I am now with Milavec C-B Realty. 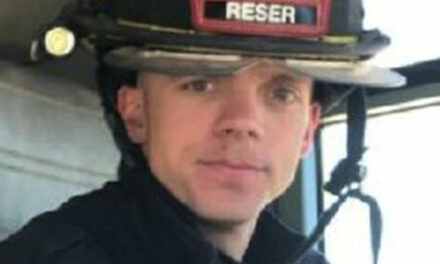