Life is better with furry friends

Every day when I get home from work, whether I’ve had a good or bad day, my evenings are always filled with love, with cuddles and with kisses.

As soon as I walk in the door, my two dogs — Geri and Kylo — act as if I’ve been gone for weeks. Even before I open the screen door, Kylo, our 3-year-old rescue mutt, is literally jumping up and down as if he was a kangaroo.

Geri, our 15-year-old Llasa Apso, doesn’t jump as much anymore (unless she’s waiting for a treat), but she does run around until I sit down so she can crawl onto my lap.

While Kylo is happy with a quick hug and kiss and a few games of fetch, Geri waits for cuddles and a quick conversation about our respective days.

Yes, I love my dogs. I love them even more than some people I know. They both know when I’m happy, when I’m mad and when I’m sad. They act accordingly with the right amount of affection.

Even though Geri doesn’t have as much energy as she once had and is a bit grumpier than when she was a pup, she’s still the best dog in the world. She makes me smile, she makes me laugh and she makes me feel needed. 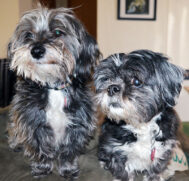 Geri still sleeps with us, although she’s a bit of a bed hog. Kylo also sleeps with us but he roams around the bed throughout the night. He often finds his way between Matthew and I.

Kylo, who we adopted three years ago, didn’t end up to be the dog we thought we got. When he was a little puppy, he would squirm away as soon as we got him into a cuddle.

Now, this little terrier/schnauzer mix is all about the cuddle. He will jump on us, no matter what we’re doing, making sure he shows us how much he loves us and wanting us to give him back our love.

I wouldn’t say Kylo is demanding, but when he wants to play fetch, we have to play. He’ll get his toy, usually his chewed-up monster, and place it in our hands. If we ignore him, he’ll nudge it further into our palm or he’ll whine until we pay attention to him.

We adore our dogs, we love them like our children. Yes, they make messes, but they love us and show us how much every single day.

Ash Flowergall Mites are the least of our worries