Though none of the local teams made the championship finals, the Amateur Athletic Union’s New Mexico State Girls Basketball Tournament held last weekend in Los Lunas was deemed a success.

Eight teams from Los Lunas competed in the tournament held at various locations around the village on Friday, Saturday and Sunday. Los Lunas was represented in all but one of the seven age groups spanning 10-and-under to 16-and-under. The tournament consisted of 50 teams from New Mexico and El Paso, Texas.

“I was really happy with the turnout,” said Jane Miner, president of the AAU’s region that encompasses New Mexico. “We had 10 more teams than last year. As the president, I would say it was a huge success.”

After the first day, the hometown representatives seemed to be in good shape. Three of the eight local teams that won at least their first two games to stay in the winner’s side of

The county was represented by the Rockers in the 10-and-under division. The Rockers beat the Sparks, from El Paso, and Disaster, from La Mesa, in their first two games on Friday. On Saturday, however, the girls faced another El Paso team, the Northeast Stars, and the Rockers lost. They went to the loser’s bracket where they lost to the eventual champions, Attack ’91, 36-6. Attack, out of Albuquerque, went on to beat the Northeast Stars in the championship.

One age group up in the U-11 division, Belen High School’s head boys basketball coach, David Medina, coached another local team called the Rockers. The older Rockers did not fair as well as their younger counterparts. They lost their first two games, first to the Blue Devils from Clovis and then to the Rams from Portales, and were eliminated from the tournament.

“The girls played really well,” Medina said. “Both of our games were close, and we have a young team, even for this division.”

Also in the 11-and-under division from Valencia County, the Blaze won its first two games before losing to the eventual champions, Attack ’90, on Saturday. In their next game, the Blaze lost to the Blue Devils, 72-32. Attack ’90 won the championship in the age group.

In the 12-and-under division, the Tigers were representing the county. The young Tigers won their first game but fell in their second to the Lea County Flames. The Tigers then faced Team USA from Las Cruces and fell , 76-50, and were jettisoned from the tourney.

A team by the name of Liberty represented Los Lunas in the U-13 division. Liberty lost its first game to the older version of the Lea County Flames. Liberty rallied to beat the El Paso Blaze but fell in its next contest to the Grants Blue Devils.

The U-14 age division was the only age group without a Los Lunas team. Rio Rancho’s Reaction went on to win the division.

The U-15 Los Lunas Pacers lost their first contest to Lordsburg and fell to the eventual champions, the Albuquerque Attack, in their second match-up. Attack climbed out of the loser’s bracket, however, and beat the Heat in a two-game championship series.

In U-16 division, the Desert Valley Tigers represented Los Lunas along with the Sting. The Tigers won their first two games but lost a close contest against El Paso’s Lady Swoops, 71-76, in their next game. The Tigers then faced a demon from their past — Albuquerque’s Elite. The Tigers beat Elite in their second game of the tournament, 61-39, but Elite got revenge in the end. The Albuquerque team came back from a late deficit to beat the Tigers in the consolation game.

“We played really well,” Desert Valley coach Pat Powers said. “Both of the games we lost came right down to the wire. In the end, it came down to free throws, and we had to send them to the line to get the ball back.”

Also in this bracket, the Sting lost its first two games by small margins and was eliminated from the tourney.

El Paso’s Lady Swoops went on to win the U-16 division for the second year in a row. The winners of each of the age groups are eligible to go on to play in their respective national tournaments held at various sites all over the country. 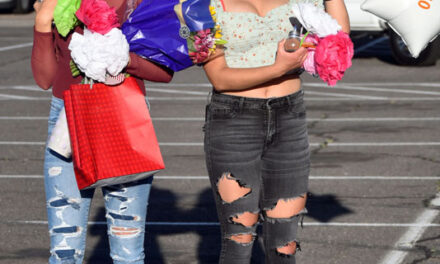