Another Los Lunas athlete will compete in college, as LLHS track and basketball star Kylie Burgess has signed to run track at the University of Jamestown in Jamestown, N.D.

Burgess, who primarily runs the 200 and 400-meter races for the Tigers, will run similar distances for the Jimmies.

Jamestown competes at the NAIA level as part of the Great Plains Athletic Conference. Burgess, who lost her junior season of track to the COVID-19 pandemic, will return to the track for the Tigers on Friday, April 23, when the team opens its season at the Los Lunas Invite.

For Burgess, the recruiting process was a fairly quick one, taking only a few months thanks to a family connection with the women’s coach, Jim Clark.

“My cousin on my dad’s side ran there a few years ago,” Burgess said. “She talked to the coach and he then came to me and said ‘Hey, how are your times’ and checked in on them.

“We spent a lot of time talking and getting to know each other. Originally, I was planning to wait and see if I got any more offers but Jamestown kind of stuck with me and I made my decision.” 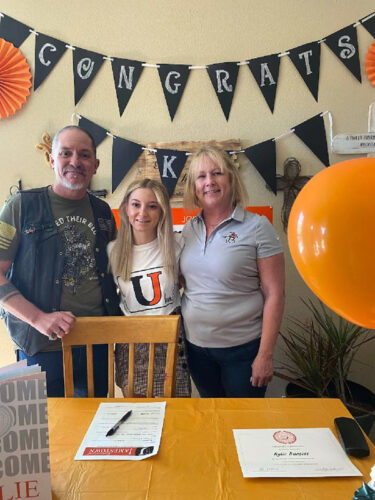 Submitted photo
Kylie Burgess, center, poses with her parents, Joe, left, and Tina Muth, right, after Kylie’s letter of intent signing at the end of March.

Once her commitment became official, Burgess said it was a weight off knowing her future plans were locked down.

“Before I got the offer I didn’t even know if I was going to run in college,” she said.

“I was super nervous about making the decision. I talked to my mom and she told me that it was my choice and I should do whatever would make me happy.

“I talked to my coaches because I wasn’t sure, but they told me they thought I could do it which gave me a lot of confidence.”

Once she gets to Jamestown, the Jimmies coaching staff see her continuing to run the 200 and 400 meters and possibly competing in the 800 as well.

With a few months remaining in her time at Los Lunas, Burgess has a few goals left to accomplish, beginning with winning a fourth state championship in basketball.

“I really want to win a fourth straight title in basketball. It’s a bit of a different challenge being in Class 5A but to win four straight would be amazing,” Burgess said.

“As for track, I just want to continue to get my times down and compete. I’d like to bring my 400 time down to a minute. I just want to go out there and compete, especially at 5A running against schools like Sandia. I think it will be a really good test for me and a good push, there’s a lot of really fast girls at this level.”

Mostly, Burgess is just happy to be able to compete again.

“It feels amazing to be back. It’s going to feel amazing when we have our first meet to be back out there,” she said. “You don’t know what you have until you lose it.”

As she prepares to close one chapter of her life and open a new one, she made sure to thank her family, as well as the coaches who have helped her reach this point.

“They have always supported me and been there for me, helping to push me to my limits,” Burgess said. “It’s been a crazy ride to get to this point but we’re going to make it a good one to finish.” 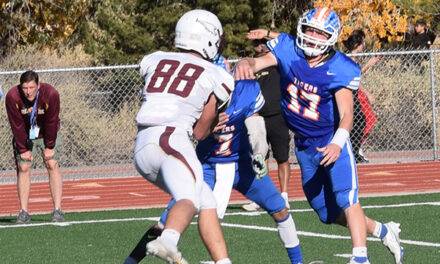 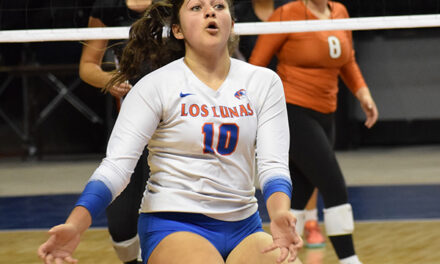