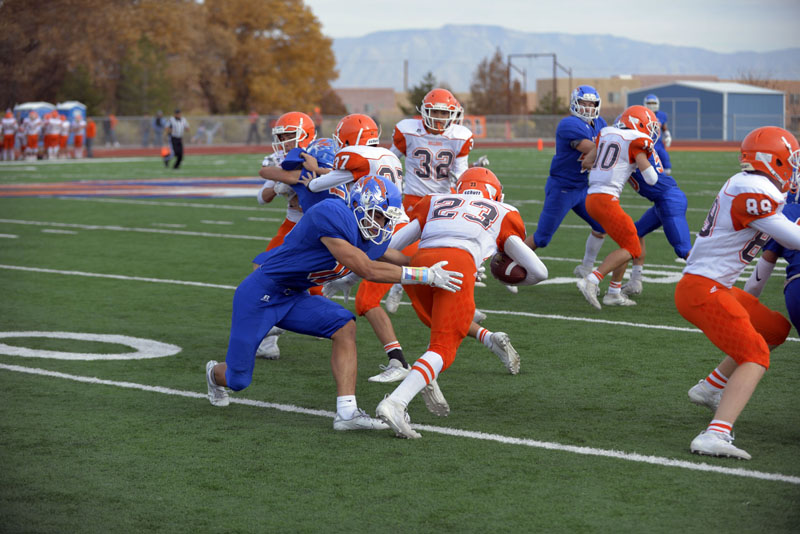 Early on, the game mirrored many aspects of the contest between the two teams earlier this season in Los Lunas, which finished 21-7 in favor of the Tigers.

Los Lunas scored two touchdowns in the first quarter, one through the air and one on the ground and led 24-6.

Goddard scored the only touchdown of the second quarter and was successful on the two point conversion attempt to tie the game at 14 going into the half.

The second half of action was all Los Lunas, however, as the Tigers scored 21 unanswered points to cruise to a 35-14 win and secure their berth in the championship.

The Tigers will host Roswell in the championship game. 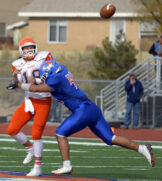 Tyler Kiehne hurries the Artesia quarterback during the second round playoff game between the two schools. The Tigers host Roswell on Saturday at 2 p.m.
Cameron Goeldner | News-Bulletin photo

The Coyotes are the No. 1 overall seed and earned their spot in the game with a 49-12 thrashing of Deming last Friday, setting up a rematch of last year’s championship game.

RHS has come out on top in each of the last two meetings between the teams, beating the Tigers 56-33 on Sept. 13, and 42-6 in last year’s championship.

The Coyotes are 12-0 this season, and haven’t lost in over a calendar year.

RHS is currently ranked as the top team in New Mexico regardless of classification by maxpreps.com.

The two schools had six common opponents this season, and both recorded a 6-0 record in those games, which primarily ended in blowouts.

Jaisa Reese was the biggest threat for the Coyotes against Deming, scoring three touchdowns. He is a threat in both the running and passing games and quick enough to give defenses fits.

Against the Wildcats, the Coyotes blew their doors off early, going up 42-6 before halftime with DHS’ only touchdown coming on its very first drive.

The final touchdown for the Wildcats was cosmetic and came after the Coyotes had finished their scoring.

In the first meeting between the teams this year, things were close throughout the first half, with the Coyotes taking a 28-21 lead into halftime following a hail mary which gave RHS the lead as time expired in the first half.

In the second, it was all Roswell as the Coyotes ran away with the game for the 56-33 final score.

Tickets for the game are on sale online at https://gofan.co/app/events/68531, or can be purchased at the gate.

Fans who buy their tickets online will need to download the Go Fan app in order to show their ticket at the gate. The cost is $10 for adults and $5 for students, military and those over 65-years-old.

The game is expected to be sold out, so fans are encouraged to get their tickets early. With kickoff scheduled for 2 p.m., gates will open at 12 p.m.