Los Lunas Board of Education members may have violated policies

Editor’s Note: The advisory opinion issued by the State Ethics Commission cited in this article was not issued in direct response to Heather Rindels’ complaint. The commission’s jurisdiction does not include complaints filed by local officials or employees, such as school districts. SEC Advisory Opinion No. 2020-04 was issued in response to a request from a state official or employee; the identity of the person who asked for the opinion is confidential, as per state statute.

LOS LUNAS—A complaint from a Los Lunas Schools employee has prompted a state commission to ask the district attorney’s office to evaluate the situation.

In late May, Heather Rindels, the buyer for Los Lunas Schools, filed a complaint with the State Ethics Commission alleging board members had violated the Procurement Code, as well as the Government Conduct Act and the Open Meetings Act.

While the ethics commission doesn’t have jurisdiction over local elected officials, it can act as an intermediary on behalf of a complainant.

The SEC issued its opinion on Rindels’ complaints in early June that the procurement code prohibits disclosure of the contents of a sealed proposal during the negotiation process, from the time the proposals are submitted to the award of the contract, and does not allow an agency to apply an undisclosed local business preference over and above the application of the resident business preference already allowed for in the code.

The commission also issued the opinion that the code does not prohibit ex parte communication — when a decision maker speaks with an applicant outside of formal channels — with potential offerors about a procurement unless the procurement is the subject of a protest.

On June 9, the SEC wrote to Rindels notifying her it referred her complaints to the 13th Judicial District Attorney’s Office, which is able to enforce the OMA, GCA and Procurement Code against a Los Lunas school board member.

“If, on investigation, it is found that a criminal law has been violated, we will evaluate the investigation and see if we can move forward,” Martinez said. “We are a prosecutorial agency, not an investigative one. We need to have law enforcement investigate and accumulate evidence.”

One concern raised by Rindels was the award of a contract to an Albuquerque accounting firm, REDW, to perform a financial investigation for the district.

In a letter dated May 14 addressed to acting superintendent Walt Gibson, which was included in the SEC complaint, Rindels says she was asked to set up REDW as a vendor for the distinct after the board unanimously voted to hire the firm, which raised several red flags for her.

Rindels says if the board or administration felt a special audit was needed, the district should have notified the state auditor and waited for direction to conduct an investigation or special audit before hiring an outside audit firm.

Rindels contends when the board members discussed hiring a firm during executive sessions at several meetings, a contract from Jaramillo Accounting Group, based in Albuquerque, was being considered.

However, after tabling the matter repeatedly, at the April 21 meeting the board approved a contract for REDW, “which was the first the board had mentioned that company … The contract documents were not received by LLS until April 22, 2020,” Rindels wrote.

Her complaint goes on to say no financial complaints have been made to district administrators or Gibson.

“… I can only assume that the complaints/concerns are coming from the board internally. If that is the case and the board member(s) are involved in selecting the (auditor) that is a huge conflict of interest,” she wrote.

Rindels closes her letter by saying if the purchasing department was purposefully left out of the process because it is under investigation, she won’t stand in the way, but wanted it on file she believes the way the board hired REDW was not legal or ethical.

Rindels also wrote to Mark Hayden, the state purchasing agent, expressing her concerns about a board member’s behavior.

According to her letter, a board member who is a member of the finance committee and privy to information contained in sealed bids and responses to requests for proposal, named the vendor and its price for carpet cleaning services in a open meeting before a contract could be negotiated.

The board member also reached out to another vendor, using the information he got as a finance committee member, to get cost estimates of the district doing the work itself, she contends.

“He also mentioned he had contacted other local vendors to see if they had been notified of the procurement,” Rindels wrote.

The procurement was ultimately canceled by LLS director of purchasing Michelle Romero because confidential information was disclosed during a public meeting.

According to the April 21 minutes during the discussion of the carpet cleaning contract award, board member Steven Otero, who is a member of the finance committee, says “the project really amounted to $40,000 plus to clean carpets …”

He later says he can’t reveal the cost or name the company, since the contract hadn’t been awarded.

Otero told the board he reached out to the company that supplies the district with carpet cleaning machines and chemicals, as well as contacted local vendors about whether they had been notified about the chance to submit a proposal.

According to the minutes, Otero said local vendors told him they weren’t notified but also acknowledged they didn’t review the local newspaper the notice was published in or visit the district’s website, where the request for proposal was also posted.

In a telephone interview, Otero said his goals as a board member were to be transparent, have information out in the open and document everything the district is doing.

“And I will continue doing so,” Otero said. “I don’t feel I violated the procurement code in any way.”

He argued his disclosure of the carpet cleaning contract being up to $40,000 a year based on the total square footage in the district was fair.

“I never disclosed what the cost was per square foot that was in the bid,” he said. “I don’t think I violated anything there.”

Otero said he also wanted to make a case for the district doing the work itself, rather than hiring a contractor since it already had cleaning equipment.

Los Lunas Board of Education member

He also said he only wants local vendors to have the opportunity to compete for district contracts.

“I never demanded it. I’m not saying we have to cater to them but I think we can create some kind of communication, maybe just a phone call, to inform local companies we’re bidding a job,” Otero said. “If they don’t make the effort to respond, that’s on them.”

The board member said it was difficult to communicate with staff members and ask questions without being accused of micromanaging.

“My only direct contact has been with vendors. Staff has not been happy with myself checking on alternatives,” he said. “My communication has been with the superintendent only with my findings.”

Otero added since Rindels’ letter to Gibson, he felt the finance committee and board were not being provided all information on procurements.

At a later point in the discussion about the contract during the meeting, Board President Bryan Smith asked if the district were awarding “a contract up to $40,000 to A and Z,” according to the same set of minutes. Smith is not a member of the finance committee.

Rindels also asked the SEC to investigate the board for violating the Government Conduct Act, but the commission offered the opinion that the facts presented didn’t establish a violation of the act.

Another issue Rindels brought to the SEC was the possibility the board was using a legal firm without a contract. In a May 13 email to Romero, Rindels wrote she’s concerned about an addendum for a purchase order to Himes, Petrarca and Fester Attorneys.

Rindels points out when the district issued an RFP for legal services in April 2019, three companies were approved, but Himes did not submit a proposal.

“If the scope of work continues into next (fiscal) year, this PO will surpass the $60,000 professional service threshold and the district will be in violation of the procurement code,” she writes. “Considering that the board is acting independently and going outside of policy and procurement code, I am not comfortable with approving this addendum.”

The SEC didn’t issue an opinion on the payments to Himes, Petrarca and Fester Attorneys. 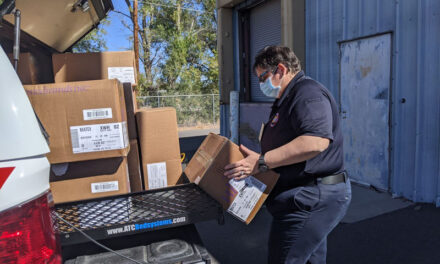