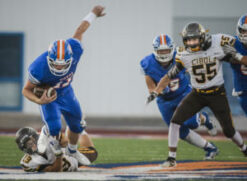 LOS LUNAS — With Goddard on deck in a week, the Los Lunas Tigers took down one of 6A’s best teams.

Los Lunas’ defense registered both a pick-6 and a goal-line stand — the latter coming with under 2 minutes remaining — as the Tigers, ranked No. 3 in 5A, held off Cibola, ranked fifth in 6A, in a 26-19 homecoming victory on Friday night.

“For us, it absolutely was being in a dogfight against adversity,” Los Lunas coach Greg Henington said. “And coming out on top. And that’s exactly what we needed.”

The Los Lunas (5-0) defense made three huge plays to beat the Cougars (2-2). The first of them, in hindsight, was probably the most influential.

Cibola was trailing 14-6 midway through the second quarter when QB Aden Chavez threw deep down the middle to Marcus Wilson. He was inside the 10 and almost certain to score on a 39-yard touchdown reception. But Wilson dropped the pass, which hit him in the hands.

On the next play, which was fourth down, Chavez, under pressure, tried to throw to a receiver while being tackled. Eric Aragon of Los Lunas stepped in front of the pass and returned it 60 yards for a touchdown, and Cibola found itself staring at a 20-6 deficit.

The second defensive highlight for the Tigers came with Cibola driving late in the game. The Cougars were first-and-goal from the Los Lunas 3. The Tigers held on the first three downs.

On fourth down, safety Aden Pairett shot in for the Tigers and threw Cibola’s Branden Castillo, who was trying to go wide, for a 2-yard loss.

“They pulled the tight end and I saw him go outside, and I kept the edge,” Pairett said. “And I got him on the bounce.”

Cibola’s defense held, however, and forced a Los Lunas punt from the back of the end zone. Cibola got it at the 50 with 65 seconds remaining.

But on first down, Chavez fumbled. The Tigers recovered and ran out the clock.

“Just too many self-inflicted mistakes,” Cibola coach Rod Williams said. “We definitely did a lot to hurt ourselves in this game.”

Chavez threw 6 yards to Wilson for Cibola early in the second quarter to cut the deficit to 14-6. The Cougars pulled within 20-13 on a 42-yard Chavez-to-Nathan Lopez TD pass midway through the third quarter.

The Tigers answered with Cash Aragon’s 1-yard TD run and a 26-13 lead. Los Lunas started strong, with TD drives on its first two possessions for a 14-0 lead. That included a blown Cibola coverage that led to the first points, a 50-yard connection between Paul Cieremans and Emilio Mora.

Chavez threw a 21-yard touchdown pass to Wilson on a fourth-and-17 play on the first play of the fourth quarter to get within seven at 26-19.