Los Lunas— The Los Lunas Tigers came within a touchdown of claiming their first state championship since the playoff format was introduced but ultimately came up short as the visiting Roswell Coyotes prevailed 25-19 at LLHS.

“I thought our kids battled,” Tigers head coach Jeremy Maupin said. “Even on the errors, we had some big plays. “We made some mistakes but like Bryce Santana fumbled and he comes back the next series and strips the ball from them. Really proud of our guys and the effort today.”

The Tigers struggled mightily early on, turning the ball over three times in the first quarter which stemmed their momentum.

However, the LLHS defense was up to the task and was able to limit the damage, holding the Coyotes to 10 points off of those turnovers.

RHS scored its touchdown on fourth and goal as Joel Sanchez caught the ball on a 10-yard out route to put the Coyotes up 7-0.

Tigers’ wide receiver Lorenzo Sosa attempts to catch a pass over the outstretched arms of a Roswell defender during the first half of Saturday’s game at Los Lunas High School. Roswell claimed its second straight championship with a 25-19 win over the Tigers.
Cameron Goeldner | News-Bulletin photo

With 35 seconds left in the quarter, the Tiger defense held and forced a field goal, which Sanchez converted from 28-yards out to make the score 10-0. After the first, the Coyotes led 10-0.

Los Lunas’ offense finally got some momentum in the second quarter when quarterback Kade Benavidez and wideout Joel Hernandez connected on a ten-yard touchdown pass to make the score 10-6 after an errant snap prevented the extra point attempt with 10 minutes left in the quarter.

The Tigers got another touchdown near the end of the quarter as Derek Chavez took the ball in from 13-yards out for the rushing touchdown.

Once again, the Tigers had trouble with the snap on the extra point and failed to convert as they went for two, making the score 12-10 with just over a minute left in the first half.

On the first drive of the third quarter, the Coyotes came out and put together their most complete offense drive up to that point, and capped it off with a 40-yard flea-flicker from Sanchez to Jaisa Reese to take a 17-12 lead with 10:03 left in the quarter, the only scoring that occurred as the defenses took over the game.

In the fourth quarter, the Tigers struggled to tie up the game or generate much positive momentum offensively with Benavidez battling through a pair of injuries suffered earlier in the contest. 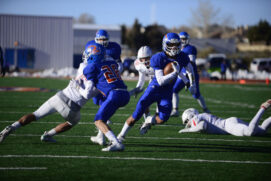 With a little over four minutes left in the game, the Tigers defense failed to make back-to-back red zone stops. On the previous Roswell possession it got the ball down to the five-yard line, but the defense was able to force a turnover on downs.

Unfortunately for the Tigers defense, the offense went three-and-out and they soon found themselves backed up again.

This time, Roswell scored on an eight-yard touchdown pass to Angel Caballero and converted the two-point attempt to make it 25-12 with 4:44 to go.

Los Lunas wasn’t willing to lie down, however, and put together their quickest, most effective drive of the game which was capped off by a Bryce Santana touchdown run making the score 25-19 with 3:29 left in the game.

Roswell recovered the onside kick attempt, but the Tigers defense was able to get a stop on and give the offense the ball back with a little over a minute remaining in the game.

Early in the drive, the Tigers were able to move the ball effectively and got past midfield before things started to stall.

Benavidez took a sack on second down and, with 19 seconds left, spiked it on third down to set up a fourth-and-15 to keep things alive.

Roswell dropped back into a prevent defense that had the safeties playing inside the five-yard-line. Benavidez saw his pass intercepted and the Coyotes were able to take a knee and secure their second straight 5A State Championship as well as cap off a 13-0 season.

For the second year in a row, Los Lunas finished as the state runner-up. The Tigers finish with a 10-3 record, the best record for the program since the team went 13-2 in 2012.

That group fell to Goddard High in the first state championship appearance of the playoff era.

“I know we didn’t finish like we wanted to but I’m really proud of the way they battled and fought and took our game plan and ran with it,” Maupin said.

“They trusted us and believed in us, we just ran into a really good football team. They’re undefeated for a reason.”

Los Lunas came into the game not feeling any pressure, Maupin said because the Coyotes were the No. 1 seed and trying to stay perfect.

The Tigers did everything that he hoped they would, ultimately though, they came up just short.

With the season coming to an end, the Tiger football program has to say goodbye to 27 seniors, many of them starters.

The biggest hole to fill next season will be at quarterback as Benavidez graduates.

“This is really the first group because I’ve been here three years, so these sophomores from when I got here, now the seniors are really the first class that I’ve had all the way through in my program and what we want to do,” Maupin said.

“I’m really proud of them and they’ve left a legacy here of back-to-back appearances in the championship.”

“Hopefully, we can keep this thing rolling and get the next guys up. Hopefully, we’re building a program where we can compete for a state championship every year.”

In the modern era, the Tigers have never been able to capture the state title, but have now made three title game appearances since 2012, and the current crop of players is responsible for two of those.

If Maupin is able to accomplish the goals he has put forth for the program, this group could be seen as the one that helped to launch the program to new heights.

Despite having to replace such a large group of seniors, the Tigers have a number of high impact players who will return next year.

Defensively, the returners are highlighted by defensive end Tyler Kiehne, the rising senior recently became the second ever player from the state of New Mexico to receive a scholarship offer from Wisconsin and holds offers from many other universities as well.

Prior to the state championship, he was averaging 5.1 tackles per game and recorded nine sacks as well as forcing two fumbles. In total, he had a part in 51 tackles this season and was named to the All-State second team defense.

On the offensive side of the ball, receiver Lorenzo Sosa and leading rusher Derek Chavez both return, giving whoever takes over at quarterback plenty of weapons. 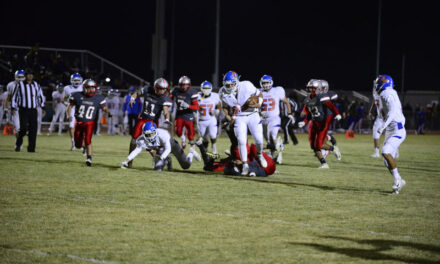 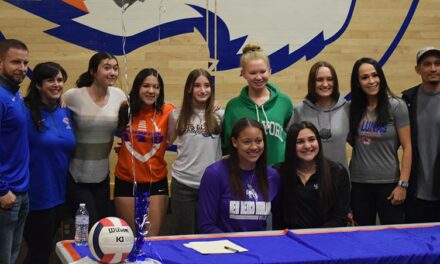