BELEN — A Los Lunas man is facing a slew of state and possibly federal criminal charges after Belen police found him with several weapons, drugs and cash during a traffic stop.

Belen Deputy Police Chief Jose Natividad said while on routine patrol on the afternoon of Wednesday, March 23, BPD officer Chris Robinson, who is the department’s new field training officer, was driving north on Main Street when he and his trainee, officer Anthony Jaramillo, encountered a vehicle.

“It had really dark, tinted windows, and they couldn’t see a license plate or a temp tag on the vehicle,” Natividad said of the Nissan Maxima. “They initiated a traffic stop that occurred in the parking lot of Dollar Tree.”

Natividad said when the officers stopped and approached the vehicle, Robinson asked the driver, later identified as Gilbert Duran, 46, of Los Lunas, to step out of the car because he couldn’t produce a driver’s license. 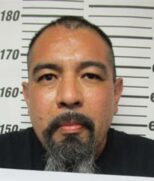 “As the encounter progressed, (the officer) asked if he had any weapons, to which he said no. They were doing a (pat down) and they initially found three knives, which were pulled out of his front pockets,” Natividad said. “As the (pat down) continued, the officer felt the handle of a pistol of his back waistband area. When (Robinson) asked what it was, he told them he forgot he had it and took off running.”

The two officers chased Duran and caught him about 40 yards away in an empty lot north of Dollar Tree. Before apprehending the suspect, Robinson had deployed his Taser at Duran, but the prongs didn’t penetrate, the deputy chief said.

“Officer Jaramillo stayed with the vehicle because it was still occupied by a female and her child,” Natividad said. “Once Robinson got (Duran) on the ground, he put him in handcuffs and removed the firearm from his waistband for everyone’s safety.”

Natividad said after Duran, who was found to have about $1,000 in cash on him, was taken into custody, he complained of neck and back injuries. The suspect was taken to an Albuquerque hospital, released and then booked into the Valencia County Detention Center.

During the investigation, it was learned a warrant had been issued for Duran’s arrest for resisting arrest in Las Vegas, N.M. He is also being held on a probation violation.

According to court records, Duran was given a suspended sentence of 13 years in prison, placed on five years of supervised probation last year by District Court Judge Cindy Mercer in relation to four different cases in 2018 and 2019.

In one of those cases, Duran was charged with first-degree murder in the Oct. 4, 2019, death of 37-year-old Rebecca Baldonado, of El Cerro Mission. That charge was dismissed by prosecutors.

“Since (Rebecca Baldonado) was shot and killed in a vehicle that was travelling, the bullet trajectory analysis, given the position of the victim and defendant, made it nearly impossible to determine if the defendant discharged the weapon, killing her,” Simms said. “Because of the positioning (of Duran and Baldonado) in the vehicle, it was difficult to identify the defendant as the shooter. That would have been very difficult to overcome, even with independent, expert witnesses. Our obligation is to prove facts beyond a reasonable doubt, and if we are not able to meet that burden at trial my ethical considerations have to be consistent with the defendant’s due process and what we can prove at trial.”

Simms continued, saying Duran’s behavior at the time of Baldonado’s death was less than ideal and less than compassionate.

“Now that he is facing new and very serious charges, we plan to prosecute to the fullest extent of the law and as evidence permits,” she said.

Duran did plead no contest to several other charges in that case and the other three cases, including bribery of a witness, three counts of tampering with evidence, trafficking a controlled substance, criminal damage to property, possession of a controlled substance and aggravated fleeing of a law enforcement officer.

Natividad said the day after Duran’s arrest, Belen police detectives obtained a search warrant for his vehicle. During the search, the deputy chief said they found backpacks — in both the front and back seats of the car — filled with drugs, to include illegal mushrooms, methamphetamine, crack cocaine, Xanex pills, Fentanyl pills and other prescription drugs, THC wax mixed with white pills and a crystal substance, glass jars and several gallon-size plastic bags filled with marijuana, some of which had several white pills mixed in.

Along with the 9mm pistol the officers found on Duran on March 23, they also found a AR-15 and as well as different calibers of ammunition.

When asked about the woman and child who were in the vehicle, Natividad said the woman claimed she was a friend of Duran. He said officers will discuss the case with the district attorney’s office as to potentially charge the woman.

The child, Natividad said, had been securely retrained in a car seat in the back seat, but could have possibly had access to the backpacks that were near her.

The deputy chief said while Duran is in jail on a no-bond hold for allegedly violating his probation, BPD will be speaking with both the district attorney’s office and the FBI on filing criminal charges. 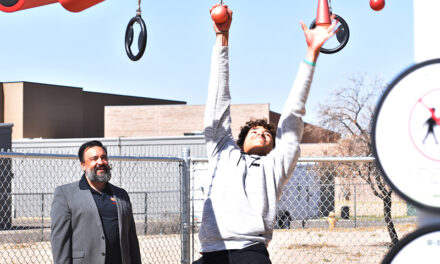